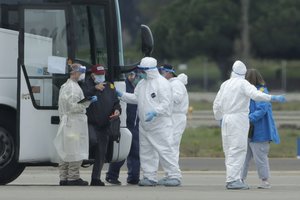 Health workers in protective gear direct passengers from the Grand Princess cruise ship, where multiple people tested positive for coronavirus, to a chartered plane in Oakland, California, on Tuesday. The passengers were to fly to San Antonio, Texas, to be quarantined at Lackland Air Force Base. As the nation responds to the coronavirus outbreak, judges could play referee when patients refuse to self-quarantine. (AP)

"Oh god, no. I thought, like most of my colleagues, 'There's important work to be done. The administration of justice is what we need to take care of,'" he told Law360. "I had no idea that there had been this set of protocols for catastrophic emergency situations. It's not the kind of thing that the typical lawyer thinks about when seeking to ascend to the bench."

That changed last week, when Texas Supreme Court Chief Justice Nathan Hecht phoned the state's presiding judges and asked for help selecting a small group of jurists to be on call to issue an emergency quarantine order if a coronavirus patient ignores medical advice.

Also on that conference call was Judge Susan Brown. She presides over the 11th Administrative Judicial Region, which includes the city of Houston. It's home to the largest port on the Gulf Coast and an intercontinental airport. She picked four judges in her region who were up to the task.

"I wanted people on the ground ready to go," she said. "It had to be somebody who's willing to pick up the phone in the middle of the night, or not be worried about driving somewhere to have a hearing, if need be."

As the number of confirmed U.S. coronavirus cases continues to grow, local courts around the country are beginning to dust off their emergency operations policies. That could mean judges will play referee when patients refuse to self-quarantine.

The threat of a rogue patient seemed more possible in recent weeks, as a few people with symptoms or exposure to patients diagnosed with COVID-19, the disease caused by the coronavirus, flouted doctors' orders to stay put.

Last month, a New Hampshire man who'd just been tested for coronavirus ignored medical advice to self-quarantine, and instead went to a party for health care professionals and Dartmouth students.

Then there was the case of the first Missouri resident diagnosed with coronavirus. Her father and sister went to a father-daughter dance just after health department officials asked the family to self-quarantine.

Now judges are preparing should similar cases wind up in court.

Justice Hecht on Friday designated 31 district court judges across Texas to tackle such cases. They can impose emergency quarantines under the state's Health and Safety Code, and must then hold full due process hearings within 24 hours. Now, municipal, county and district attorneys as well as the Attorney General's Office know who to call should they encounter resistant patients.

New York similarly enlisted more than 100 sitting judges — seven of them in New York City — to preside over "proceedings, applications, actions and other matters arising from acts of involuntary detention, isolation and quarantine resulting from the coronavirus outbreak," according to Lucian Chalfen, a spokesman for the state court system.

In Washington and California, where the coronavirus has been declared a state of emergency, judges are used to being on call to grant search warrants, and could take on these additional emergency responsibilities, judiciary representatives in each state told Law360. Maryland has duty judges working after hours and commissioners on duty 24 hours a day who can handle "emergent issues after hours," according to its judiciary spokeswoman.

The National Center for State Courts is urging judiciaries around the country to brush up on their public health laws and to prepare. It's touting a 2016 handbook meant as a template for state court systems as they devise both operational plans and ways to bring judges up to date on arcane quarantine laws that may date back centuries.

Nora Sydow, a court management consultant with NCSC, helped put together the "Preparing for a Pandemic" guide, compiled by the State Justice Institute and the Conference of Chief Justices and State Court Administrators. She said it was meant to address judges' concerns in the wake of a 2014 Ebola virus outbreak.

"Trial court judges were saying, 'We're not public health law experts. Our public health laws were created in the time of the Spanish flu, and they're nonsensical and very confusing," she said in a Facebook Live broadcast hosted by the NCSC last week.

Public health codes differ from state to state, and some are more confusing than others, according to Wendy Parmet, a law and public policy professor at Northeastern University.

"The more contemporary statutes tend to provide greater clarity and specificity about the procedures that need to be followed," she said. "Some laws require officials to get a court order to issue a quarantine. Other states just say 'officials have this power,' and they don't really specify the process, which means that individuals are left — if they want to challenge the process — to seek a writ of habeas corpus."

To guide judges wading through the morass, Texas has issued a 120-page benchbook for public health emergencies. Michigan's is 130 pages. Florida has a 167-page guide just for legal issues stemming from epidemic flu.

Though laws differ from state to state, the handbooks all cover the same general concerns. They outline the breakdown of federal public health powers, and the executive and judiciary powers at a state level. They discuss due process, the right to an attorney and the affidavits needed by state officials to request a quarantine.

Many of these handbooks were first dusted off after fears of the ebola virus in the U.S. hit a fever pitch in 2014. Kaci Hickox, a nurse who'd been treating Ebola patients in Sierra Leone, returned home and faced involuntary quarantine, first in New Jersey, where her international flight touched down, and then in her home state of Maine.

Maine public health officials sought to quarantine Hickox when she arrived home, and took her to state court. But Maine District Court Chief Judge Charles LaVerdiere denied the request. By the state's own admission, an Ebola patient who isn't symptomatic isn't contagious, and Hickox showed no symptoms. Judge LaVerdiere ordered Hickox to continue to allow officials to monitor her health, but he found the state hadn't met its evidentiary burden to show isolation was "necessary to protect other individuals from the dangers of infection."

The more recent quarantine resisters in Missouri and New Hampshire could be hauled into court now, but they can't face legal consequences for ignoring nonbinding the medical advice, Parmet said.

After the Missouri incident, county health directors told the man "he must remain in his home or they will issue a formal quarantine that will require him and the rest of his family to stay in their home by the force of law," St. Louis County Executive Sam Page said.

That's where quarantine judges could come into play, according to Parmet.

"An individuals' noncompliance with a strong [medical] suggestion can be a basis for getting an order," she said. "To the extent that the state requires a showing that the person poses risks to others, the fact they went out partying after they thought they might have a disease — that's good evidence."

If health authorities have reason to believe that a patient doesn't intend to abide by a doctor's self-quarantine recommendations, they could "get out ahead of it in court," Judge Brown said. "But they would have to offer proof."

"Basically what they have to prove is that the person is infected or is reasonably suspected of being infected with the disease and that they present a threat to the public health," she said. "They also have to prove the person has refused treatment or quarantine."

Such hearings will require balancing two important considerations, according to Judge Moyé: How do we protect society as well as individuals' rights?

But Parmet cautioned against thinking quarantine orders are the cure to an epidemic, especially when tests have been in short supply.

"To spend all your resources tracking down one person when lots of other people can't get tested and go about their day not knowing their status — it feels like we're falling into the trap of searching for the bad apples," she said. "What we need to do is reduce the overall prevalence of the disease and restrict the opportunity of the disease to spread."