Spike In Work Overshadowed By Billing Woes For Law Firms


Law360 (June 17, 2020, 9:18 PM EDT) -- Law firms saw an increase in new work at the beginning of June, but the industry is not in the clear yet as the impacts of the coronavirus are still being felt when it comes to collecting client payments and in ongoing staff layoffs, a Wednesday report found.

Firms saw an increase of 12 percentage points in the volume of new matters opened from the last week of May to the first week of June, from 26% below the previous year to 14% below, according to new data released by software company Clio.

At the same time, law firm billing volumes have continued to decline, Clio found, with the average firm billing 14% less in April than the previous year and 27% less in May than in the same month last year.

Clio's report is based on data collected by the company's legal practice management software, which captures aggregated and anonymized data on billing and work from tens of thousands of legal professionals. The company also conducted surveys between April 3 and May 29 of more than 2,000 legal professionals.

Billing volumes among the law firms that use Clio's software have now decreased steadily each week since Feb. 24. 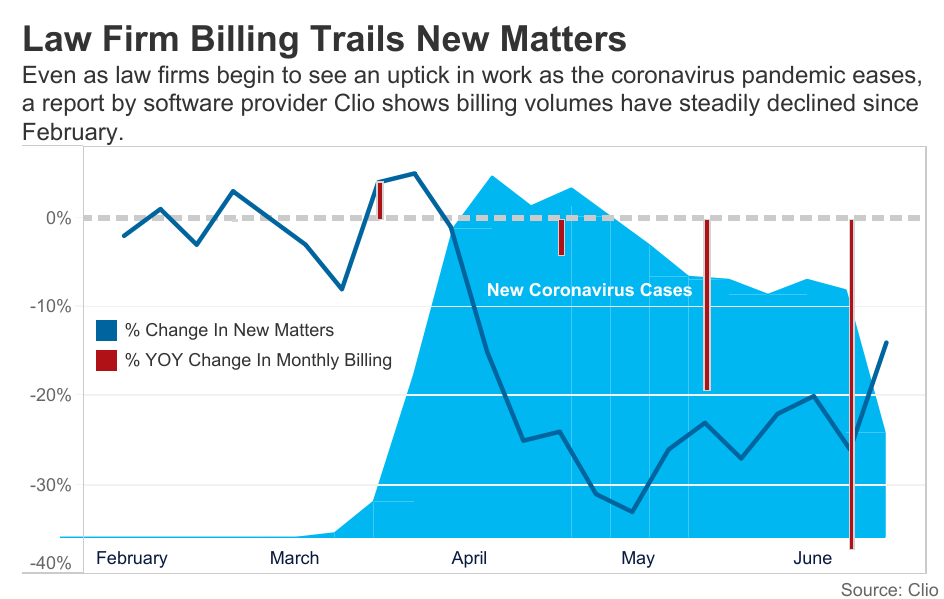 
That decline reflects a drop-off in new matters that the industry saw in previous months due to the pandemic, according to the report, with law firms sending out and collecting on their bills after work has been completed, creating a delay in when declines in work translate to fewer bills.

The report also found that as of late April, 71% of legal professionals were more concerned about their clients' ability to pay their bills than before the pandemic, and as of late May, 25% of law firms were forfeiting more revenue due to unpaid bills.

Those financial factors appear to be contributing to law firm layoffs, with Clio's survey finding that between April 3 and May 29, the percentage of respondents who said their firm had laid off staff rose from 11% to 27%. And, during the last week of May, 29% of respondents said they expected staff layoffs still to come at their firm.

The impacts of the pandemic have not been felt evenly across the industry.

According to the report, declines in new matters have been steeper for firms that focus on criminal law, personal injury law and traffic offenses, while business-related practice areas such as intellectual property, construction and insurance have fared better.