By Christopher Crosby · Listen to article 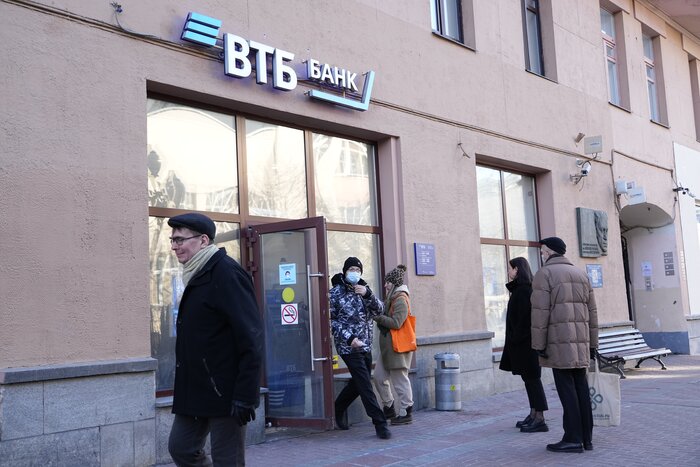 VTB Bank, pictured in Moscow as citizens queue to withdraw money, has been dropped by Freshfields as pressure grows on law firms to cut ties with Russian clients. (AP Photo/Pavel Golovkin)

The Magic Circle firm announced that it had terminated its courtroom work for VTB, days after it represented the state-backed lender in high-stakes commercial litigation in London.

A spokesperson for the firm said that it had "acted swiftly" from the start of the invasion of the European country to "terminate, suspend or decline" work from VTB and other companies and individuals with close ties to the Russian government, its leadership and the military.

The firm added that it condemns "the actions of the Russian government and expresses our solidarity with all those affected.

"This approach goes beyond what is required to comply with our legal, regulatory and professional obligations, and reflects our values as a firm and the wider responsibilities of the global business community," the spokesperson added.

A spokesperson for VTB did not confirm or deny a report in the Financial Times that the bank was pulling out of Europe. The spokesperson did not respond to queries about whether it would continue litigation in the U.K.

Another big law firm, Norton Rose Fulbright, also said on Monday that it will no longer take new instructions from Russia and was reviewing whether to cut off its existing work. A spokesperson for the firm said it was closing its Moscow office and would donate profits from Russian clients to charity.

"Norton Rose Fulbright stands unequivocally with the people of Ukraine who are suffering as a result of the increasingly brutal invasion by Russia," the spokesperson said.

The announcements come nearly two weeks after Russian forces invaded Ukraine, and a week after a Freshfields lawyer appeared on behalf of VTB in a major fraud lawsuit brought by Mozambique.

City law firms have come under pressure from lawmakers to cut ties with sanctioned individuals amid criticism that their work has enabled Russian oligarchs to live without consequence in the U.K.

That pressure has led some firms to review and even cut their ties with Russian clients. Linklaters has announced it is winding down operations in Moscow. Baker McKenzie has said it will examine its Russian links, while Allen & Overy has said it will refuse new work from the country.

The U.K. government accelerated measures to target dirty money laundered through London's financial system by Russian oligarchs this month after accusations that it had delayed introducing new legislation. The Economic Crime (Transparency and Enforcement) Bill, introduced on Monday, is designed to unmask anonymous foreign owners of property in Britain and give the authorities greater powers to seize criminal wealth.

Western governments have toughened up economic sanctions against Moscow in response to its invasion of Ukraine. They have cut off selected Russian banks from the SWIFT global financial messaging system and blocked the country's central bank from liquidating assets held abroad.

Update: This story has been updated to add comment from VTB Bank.