How Pa. Is Setting The Pace On Clean Slate Reform

It's been more than a decade since Khalia R. was arrested on ultimately unfounded suspicions of selling bootleg CDs out of a Chinese takeout joint in her West Philadelphia neighborhood, but the charges have come back to haunt her over and over again across the years.


Khalia, who asked that her last name not be printed, was taken into custody by a Philadelphia police officer who'd seen her through the window picking up a pile of CDs belonging to another man that she'd accidentally knocked over with her six-months-pregnant belly as she squeezed into the crowded shop.

"The next thing I know, I turned around and he was handcuffing me," she said.

Though the charges were eventually thrown out and she's maintained a spotless record ever since, she said the arrest posed repeated problems over the years as she's applied for jobs or, more recently, looked for financial assistance for the consulting business she now operates.

On top of all that, she said, was the emotional toll.

"One of the biggest problems of having a record is that it plays on your self-esteem, especially for a person like me not coming from one of the greatest neighborhoods." she said. "I've spent my life trying to avoid this and then it happens and you think, 'Oh my God, this just ruined my life.'"

But after more than a decade living with both the practical challenges and the personal shame of her arrest record, Khalia and more than 1.1 million other Pennsylvanians were afforded a second chance last year as the state's first-of-its-kind automated system for sealing certain low-level criminal offenses went into effect.

The state's so-called Clean Slate Act has now become a kind of national model as more than half a dozen states including Utah, North Carolina and Louisiana have started moving toward automated expungement of criminal records. 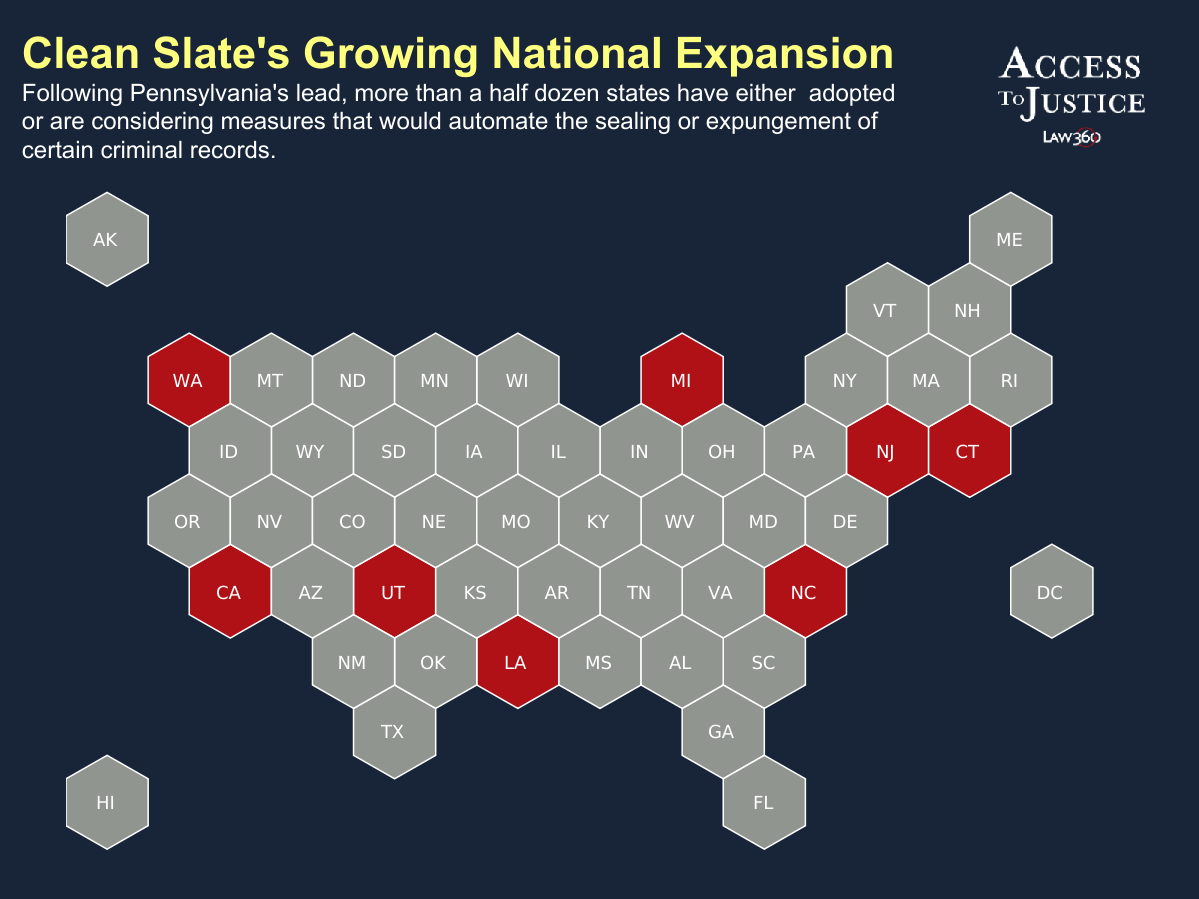 
"More and more people are going to be calling for relief in their own states because of the momentum that's happened in Pennsylvania," said Sheena Meade, the managing director of the Clean Slate Initiative, which was established two years ago to partner with organizations on the state level to push for new automated record clearing laws.

Meade and others said they were gratified to see Clean Slate programs gaining traction across the country.

"It's been a whirlwind of tremendous momentum to get to witness in such a short period of time," said Rebecca Vallas, a senior fellow with the Center for American Progress who helped to spearhead the Clean Slate program in Pennsylvania. "I think it's evidence of what a commonsense solution Clean Slate represents to remove barriers to employment and address significant racial injustice around who is saddled with a criminal record in this country and the permanent underclass that we've established."

Since going into effect at the end of June last year, the Clean Slate program in Pennsylvania has resulted in 35 million criminal cases being sealed, comprising some 47.3 million individual offenses.

The vast majority of those cases involve either arrests that did not lead to a conviction, or else a conviction on summary offenses such as disorderly conduct, loitering or low-level retail theft.

On top of that though, the program allowed for the sealing of nearly 110,000 misdemeanor convictions.

In total, the Pennsylvania State Police estimate that more than 1.1 million individual Pennsylvanians have had at least one case sealed via automation since the state's Clean Slate program went into effect last year.

"It's incredibly exciting to see how many people's lives have been touched just in the first year of this law taking effect," Vallas said.

The state has come a long way in terms of giving individuals with arrests and convictions an opportunity to clear their records.

"Pennsylvania was in the dark ages on record-clearing," Vallas said.

Before joining the Center for American Progress, Vallas worked as a legal aid attorney at Community Legal Services of Philadelphia where she helped individuals with criminal records navigate the reentry process after serving time in jail.

In conjunction with attorneys in CLS's employment unit, she saw up close the challenges that some of her clients faced trying to clear their records following a conviction.

Until just a few years ago, she said that Pennsylvania only allowed individuals to petition the courts to strike nonconvictions and certain summary offenses from their criminal records, but that any actual convictions, be they misdemeanor or felony, no matter how old, were permanent.

"There was such narrow eligibility that you pretty much had to die to get a misdemeanor off your record," Vallas said.

Things began to change in 2016 as the state enacted a law, known as Act 5, that allowed offenders to petition the court to certain misdemeanor convictions if they'd remained out of the criminal justice system for 10 years.

But even as the state expanded the opportunities to seal criminal records, Vallas said the process was byzantine.

"Petitioning the court to get your record cleared is almost impossible to successfully do if you don't have help from a lawyer," she said, "and that's assuming you can even come up with the filing fees to put the paperwork in front of the court. It can be really complicated."

Obtaining relief under Act 5 has proven a rare occurrence.

Statistics from the Administrative Office of Pennsylvania Courts show that only about 1,500 petitions to seal misdemeanor convictions have been granted under the law since it took effect in November 2016.

Sharon Dietrich, the managing attorney for Community Legal Services of Philadelphia's employment unit, said that her office was handling an average of between 5,000 and 6,000 petitions per year prior to Clean Slate taking effect from people looking to clear nonconviction arrests from their records.

Even working at that pace, she said that was no way to meet the full need.

"That was about as much as we could do, because you have to be prepared to go to court on all those cases," she told Law360. "We were obviously never going to come close to meeting the needs of people in terms of getting these cases off their record."

Dietrich said that automating the process under the Clean Slate Act, which came out of the Pennsylvania Legislature with overwhelming bipartisan support, was a commonsense way to meet the overwhelming demand.

"It's been a wonderful innovation, and the bipartisan nature of it has been really gratifying too," she said. "I really think this is the wave of the future."

And indeed other states have been joining the drumbeat out of Pennsylvania.

With a bill adopted last March and enacted in May, Utah became the second state in the nation to establish an automated process to expunge certain arrests and misdemeanor convictions for individuals who have kept a clean record for between five and seven years, depending on the type of record involved.

In California, meanwhile, the state is setting up an automated process to clear certain criminal records, including both convictions and nonconvictions, but only on a prospective basis following the law's effective date this coming January.

Vallas and Dietrich said they were hopeful that future Clean Slate adopters would expand the program to include certain low-level felony arrests and convictions in addition to misdemeanors.

In the meantime, other tweaks to the Clean Slate system in Pennsylvania are currently in the works.

While the program as enacted last year prevents otherwise eligible individuals from having their records sealed if they still owe fines or other court fees related to their cases, a bill sponsored by Rep. Sheryl Delozier, R-Cumberland, would change that. The measure passed the state's House of Representatives in December and is currently pending before a Senate committee.

"The most exciting part of marking the one-year anniversary of Clean Slate, to me, was to see how much the governor, and both Republicans and Democrats in the Legislature, have all beat the drum saying that we can't stop here," Vallas said. "It wasn't a celebration where we look at how far we've come and rest on our laurels, it's been an active discussion of what's next."

Meade said that, be it in Pennsylvania or in any of the other states that have either adopted or are considering some form of Clean Slate, she was not surprised to see the bipartisan groundswell of support for the program.

"What I've learned is that this is not a partisan issue, this is a people issue, this is about the people," she said. "I'm excited that people and legislators and stakeholders are putting people over politics."

Back in Philadelphia, with the weight of her arrest finally off her shoulders, Khalia said she was looking forward to trying to grow her consulting business.

"This has given me a boost of confidence to go ahead and take the business on full-fledged," she said. "Oh my goodness, you talk about excited? I am so excited."

Correction: An earlier version of this story misstated the scope of Rebecca Vallas's duties during her time at CLS. The error has been corrected.