By David van den Berg
Law360 is providing free access to its coronavirus coverage to make sure all members of the legal community have accurate information in this time of uncertainty and change. Use the form below to sign up for any of our weekly newsletters. Signing up for any of our section newsletters will opt you in to the weekly Coronavirus briefing.


Law360 (April 8, 2020, 7:14 PM EDT) -- For 2020, donors of cash don't face any income limit on their charitable contribution deductions under the most recent novel coronavirus relief bill, but by itself the change is not likely to spur added giving to pandemic-related projects. 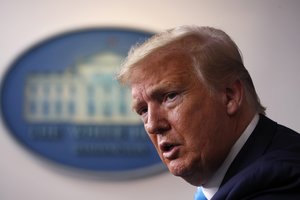 President Donald Trump signed the Coronavirus Aid, Relief, and Economic Security Act last month, lifting the cap on deductions for donations for 2020, but not for gifts to donor-advised funds or supporting organizations. (AP)

Only a small number of donors — and not necessarily superwealthy ones — are likely to benefit from the provision, according to tax professionals who spoke with Law360. That doesn't necessarily mean giving will stop; there are opportunities for high-income donors to fund virus-related projects. Taking advantage of tax incentives in the Coronavirus Aid, Relief, and Economic Security Act

may not fuel those gifts, though.

"The ability to give away all of your income and pay no tax is not exactly a tax shelter," said Alexander Reid of Morgan Lewis & Bockius LLP, who advises tax-exempt organizations on planning, structural and transactional matters. "Anyone who avails him- or herself of this opportunity is by definition going to be motivated by charitable goals over economic goals."

The 2017 tax overhaul generally reduced incentives for charitable giving, though it did increase the adjusted gross income limit for deductions for cash donations to public charities from 50% to 60% through 2025. However, the increased limit applies only if all of the donor's contributions to a public charity are in cash, according to a January Congressional Research Service report citing the Joint Committee on Taxation. The CARES Act, signed into law by President Donald Trump last month, lifted the cap entirely for 2020, but not for gifts to donor-advised funds or supporting organizations.

Research shows that many taxpayers who give over the 50% or 60% income cap aren't itemizers, so they won't benefit from the lifting of the cap for 2020, according to C. Eugene Steuerle, a co-founder of the Urban-Brookings Tax Policy Center.

While higher-income taxpayers are likely to be the main beneficiaries of the CARES Act's lifting of the income cap for deductions, the superwealthy, who receive most of their income from unrealized gains, can get the benefit only for income that is realized, Steuerle said.

In the past, Congress has lifted the income caps for limited periods, such as for relief donations for Hurricanes Harvey, Irma and Maria in the Disaster Tax Relief and Airport and Airway Extension Act of 2017, and for California wildfire relief donations in the Bipartisan Budget Act of 2018. Based on Joint Committee on Taxation estimates, Steuerle said, he expects the recent change under the CARES Act to lift the income cap will generate roughly $3 billion of giving at a cost of about $1 billion in revenue, adding he's "modestly positive" about it as a policy.

That's a fraction, though, of total annual individual giving. In 2018, for example, Americans gave $428 billion to charity, with the largest share, 68%, coming from individuals, according to the National Philanthropic Trust, which cited Giving USA data.

Robert Waldman of Venable LLP, who advises foundations, hospitals, educational institutions, community foundations and other charitable entities, told Law360 that donors don't often come up against the 60% cap and that he doesn't expect many donors will increase giving because lawmakers lifted it.

"The tax stuff can help," he said. "But I'm not sure it's ultimately the driver here."

For donors who can take advantage of the income cap's being lifted, there are a couple of smart options for doing it.

David Levitt of Adler & Colvin, who represents tax-exempt organizations, said donors who want the full tax benefit could join others contributing to a field-of-interest fund focusing on a specific area of relief at a local community foundation. None would have the ability to guide where the money went, however, he said.

"The tax advantage is you get a public-charity deduction," he said.

That gifts to donor-advised funds aren't eligible for the CARES Act provision gives community foundations that are operating funds other than donor-advised funds a potential edge, Levitt said. Donors who want more control over what's done with their money might also want to explore a private operating foundation, but Levitt said he wouldn't advise clients to set one up solely based on the limited tax advantages in the CARES Act.

The CARES Act allows full deductions for donations to private operating foundations, which are defined as foundations that spend at least 85% of their adjusted net income or their minimum investment return, whichever is less, directly for the active conduct of their exempt activities.

Ofer Lion of Seyfarth Shaw LLP said he sees opportunities for a small number of wealthy donors to avail themselves of what he called "super deductible cash contributions" that the CARES Act provides. Those donors could make large gifts to some types of foundations, including flow-through foundations, which spend everything they receive in a given year.

"You can effectively not only zero out your adjusted gross income for the year, but you can actually make contributions in excess of that so that you're carrying forward into future years charitable contribution deductions," he said. "It's really geared, I think, at folks who are going to make what I would think of as massive cash contributions here in 2020, when we need them to do that most desperately."

Those enormous cash contributions, Lion said, could be channeled into program-related investments, or PRI. Foundations receiving large cash gifts from such donors could invest in companies producing protective gear for medical professionals or ventilators, for example, or those that are conducting research into drugs and vaccines.

"There's certainly a pool of philanthropic people who think that a profit motive is a great way to drive people towards the goal that you're trying to reach," he said.

In a scenario in which multiple companies are working to develop tests, for instance, they may be seeking funds to "rocket launch" their efforts, Lion said, adding that "a program-related investment might be the ideal way to do that."

Program-related investments generally don't qualify as the active conduct of a charitable activity, though, according to James Joseph of Arnold & Porter Kaye Scholer LLP. There is a narrow exception, he said, if the private operating foundation "is significantly involved in the investment" — it can't be a passive investor, he said.

Program-related investments, however, are often anything but passive, Lion said. They're regularly established with strings attached, like side letters mandating the use of funds for specific purposes and possibly a seat on the receiving company's board or advisory board, he said.

"That type of ongoing oversight and advisory activity can amount to 'significant involvement' in the active program being supported by the PRI, and can count towards the private operating foundation's 'active conduct of activities' constituting its charitable, scientific, educational or other exempt purpose," he said. "So, yes, a private operating foundation can be a good candidate for a PRI program."

Reid of Morgan Lewis similarly said that a philanthropically minded donor could make a large cash donation to a private operating foundation in support of a program-related investment by that foundation for a project related to the coronavirus pandemic, and theoretically zero out his or her income tax liability in 2020. But he doesn't think it will happen much.

"The reason I don't foresee widespread use of this structure is that private operating foundations are most useful in situations where the donor desires to maintain management and oversight of the contributed funds," he said. "In the context of a disaster, however, the community needs tend to be fairly basic, so a highly nuanced philanthropic vehicle may make less sense than one which is already engaged in the right work but which simply needs more capital to achieve its goal."

Clarification: This article has been updated to clarify Steuerle's comments.