How Law Articles And A Viral Clip Got Barrett The Nomination

Law360 (September 27, 2020, 8:39 PM EDT) -- For 15 years, Amy Coney Barrett quietly built the reputation as a conservative legal scholar that earned her a nomination to the Seventh Circuit. Then came the viral moment during her Senate confirmation hearing that made her a star.

Conservatives tell Law360 that Judge Barrett's rapport with the president and strong support from the religious right put her atop a field of candidates the White House was considering for the job as Republicans race to fill the late Justice Ruth Bader Ginsburg's seat on the Supreme Court. 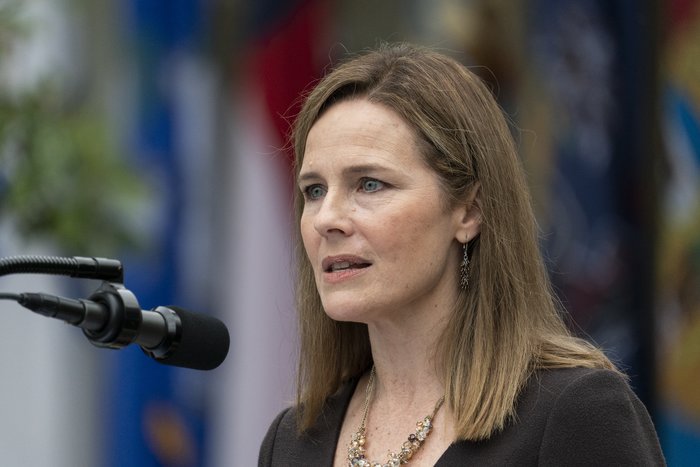 Judge Amy Coney Barrett saw her stock rise during her Senate confirmation proceedings as a nominee for the Seventh Circuit in 2017. (AP Photo/Alex Brandon)

Unlike the other female judges on President Donald Trump's short list, Judge Barrett has left a lengthy paper trail of her views on core constitutional and statutory issues in her years as a professor at Notre Dame Law School and a judge on the Seventh Circuit. That record that shows her strong conservative bent.

"Amy Coney Barrett checks every box, basically," said John Malcolm of the Heritage Foundation, who attended her nomination announcement at the White House on Saturday. "She clerked for two stellar conservative jurists. She has written in leading law reviews on a whole bunch of topics that conservatives care about: originalism,  textualism, stare decisis."

In contrast, Judge Barbara Lagoa, the widely reported runner-up in the White House's search, has a less-known record on some of those issues, having spent the majority of her judicial career on an intermediary state appellate court in Florida.

"She hasn't done any academic writing, any speeches, and only been on Eleventh Circuit for a short period of time," said Malcolm. "Judge Lagoa in another year or two may be the perfect candidate for a Supreme Court nomination. But her record was a little thin on that regard — her opinion on matters that are likely to come before the Supreme Court."

Making the White House's choice easier, experts say, was that the president and his top advisers were already familiar with Judge Barrett's record, having vetted her for Justice Anthony Kennedy's seat before it ultimately went to Justice Brett Kavanaugh. "At a time when they wanted to make a quick decision, she had been vetted to a large extent so it was less of a risk than someone whom they hadn't looked at as closely," said Ilya Shapiro of the Cato Institute.

In her short remarks accepting the nomination Saturday, Judge Barrett reassured conservatives about her ideological views, naming Justice Antonin Scalia, whom she clerked for during the 1998 Supreme Court term. "His judicial philosophy is mine, too," she said of the late conservative firebrand. Judge Barrett also clerked for another prominent conservative, Judge Laurence H. Silberman, on the D.C. Circuit.

"That is very heartening to hear for people in the conservative legal movement," Malcolm said.

Long admired in the world of conservative legal academics, Judge Barrett saw her stock rise considerably during her Senate confirmation proceedings as a nominee for the Seventh Circuit in September 2017.

Democrats homed in on some of Judge Barrett's writings that they said showed her inability to separate her strong Catholic faith from her duty to be an impartial judge.

As the co-author of a 1998 law review article, she said that Catholic judges are "in a bind" about the death penalty because, while bound by law, they are "also obliged to adhere to their church's teaching on moral matters." And in a talk at Notre Dame years later, she said that a "legal career is but a means to an end ... and that end is building the Kingdom of God."

Questioning Judge Barrett, the ranking Democrat on the Senate Judiciary Committee questioned whether she would let "dogma" influence her view of the law.

"When you read your speeches, the conclusion one draws is that the dogma lives loudly within you, and that's of concern when you come to big issues that large numbers of people have fought for for years in this country," said Sen. Dianne Feinstein, D-Calif.

Judge Barrett insisted she would not let her faith influence her view of the law, and Feinstein was accused of anti-Catholic bigotry as videos of the exchange went viral on social media.

"[Judge Barrett's] been someone who had a lot of national prominence ever since she was attacked by Sen. Feinstein during her confirmation hearing," said Carrie Severino of the Judicial Crisis Network, an outside group that plans to spend as much as $10 million on political ads supporting Judge Barrett's nomination. Severino also attended the Rose Garden announcement Saturday.

"So many people were really impressed by her grace under pressure," she said. "That's something that is a hallmark of a Trump nominee, not just at the Supreme Court but at the circuit courts as well — people who have illustrated their courage and ability to withstand pressure."

The tough questioning backfired, said Shapiro. "The effect was to raise her stature. She became a martyr of sorts."

Since their disappointment by Justice David Souter, who drifted left over the course of his career, Republicans have made sure to pick candidates with a proven conservative judicial record.

In just three years on the Seventh Circuit, Judge Barrett has passed that test. Since her 55-43 confirmation in October 2017, she has penned dozens of opinions and dissents and joined many more revealing her strict textualist approach and ideological leanings.

In politically controversial cases, Judge Barrett has been reliably conservative. She has voted twice to review panel decisions blocking Indiana abortion restrictions, and she argued that a federal law barring felons from owning guns was unconstitutional as applied in another case.

Earlier this year, Judge Barrett dissented from a Seventh Circuit panel that upheld a federal judge's order temporarily blocking the Trump administration from enforcing its public charge immigration rule in Illinois, although the rule penalizing green card applicants who may use public assistance in the future remained in effect nationwide.

In so-called business cases, Judge Barrett has often sided with employers and companies over civil plaintiffs. Writing on behalf of a unanimous panel earlier this year, she said Grubhub delivery drivers in two proposed wage-and-hour class actions must arbitrate their claims.

And last year, she voted to bar job applicants from bringing claims that certain hiring practices have a discriminatory impact on older workers. The conservative Reagan appointee on the Seventh Circuit, Judge Frank Easterbrook, dissented.

"She doesn't have a decade's worth of work on the federal bench, but what's there is very solid," said Malcolm.

A Favorite Of Social Conservatives

With the November election looming large over Trump's third Supreme Court vacancy, experts say that Judge Barrett's popularity among social and religious conservatives is also what set her above the rest.

Republicans like Sen. Josh Hawley of Missouri decried some of the decisions that Trump's earlier nominees handed down during the 2019 Supreme Court term. The most notable example was a case involving Title VII of the 1964 Civil Rights Act in which Justice Neil Gorsuch sided with the liberal justices to make discrimination against LGBTQ workers a violation of the landmark federal law.

Hawley said he would only support a nominee with a strong record opposing Roe v. Wade. Out of the various names being considered for Justice Ginsburg's seat, Judge Barrett had the strong backing of the religious right and anti-abortion groups.

Justices Kavanaugh and Gorsuch were known for their strong views on constitutional issues like the separation of powers in administrative law, but perhaps less so on key social issues, said Malcolm. Barrett, meanwhile, "cuts across the spectrum," he said.