Law360 (March 31, 2020, 8:51 PM EDT) -- The coronavirus pandemic has upended daily life across the globe, forcing many people to telecommute indefinitely — and for those working in countries where they don't normally conduct business, there's potentially an added tax headache for their employers. 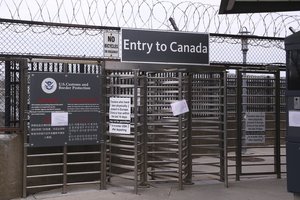 People who live in the U.S. and ordinarily commute to work in Canada by crossing the border at points of entry like the Rainbow Bridge in Niagara Falls, New York, are now working at home during the pandemic, and the tax implications for their employers are complex. (AP)

Around the world, people are working from home and taking other social distancing measures in response to the global pandemic of the virus, which causes the respiratory disease COVID-19. Cross-border travel restrictions mean that some employees are working where they're not technically based for company purposes. For example, people who live in the U.S. and normally commute across the border to Canada are now working in their home country.

Depending on the type of work and the relevant tax treaty, these newly remote employees could be creating a permanent establishment — a taxable presence in the countries where they're telecommuting from. Companies can take proactive steps in an effort to prevent their workers from creating a permanent establishment, but in some regards, their hands may be tied, said David Sites, a managing partner for international tax services at Grant Thornton LLP.

"These people are where they are," he said. "They're not there because it makes sense for … business. They're there because it's a situation that was out of everybody's control."

The question at the top of everybody's mind centers on what this definition means for the everyday worker and what it means for somebody in a management position, according to Sites.

"It's a place where there's a number of shades of gray, and it's a very fact-specific analysis," he said. "But it's important that there are some tried-and-true provisions in the treaty that protect you for certain types of activities."

The U.S. model treaty has carve-outs for certain activities that don't give rise to a permanent establishment, including work of "a preparatory or auxiliary character." Such conduct can refer to using a facility solely for storing goods or maintaining a fixed place of business solely for collecting information, according to the model treaty.

However, he noted, "there is a fuzzy line between oversight and management advisory services."

One of the most common ways to trigger a permanent establishment is through contract negotiations in a jurisdiction, one of the elements that can create a fixed place of business.

Companies could issue internal guidelines for remote workers affected by the coronavirus outbreak to prevent them from binding the company to a contract, according to Sites. In addition, companies could try to keep someone's decision-making authority subject to the appropriate oversight, he said.

To the extent a company can document that oversight, "I think that goes a long way towards you being able to make your case later with a tax authority," Sites said.

"It certainly makes you more sympathetic if you addressed the issue and provided guidelines," he said.

In a similar vein, companies could issue internal guidelines to make sure anyone stuck in the "wrong" place doesn't commit the business to any agreements involving nonexempt activities, such as sales, according to McDermott Will & Emery LLP partner David Noren.

If companies can't avoid a situation in which their workers create a taxable presence, these surprise permanent establishments can have a range of consequences.

The tax consequences directly tied to an unexpected permanent establishment aren't the only issues that companies have to worry about regarding their remote employees.

This new taxable presence can also set off cascading effects for employers, according to Richard Tonge, global mobility services principal at Grant Thornton. Employees would be deemed to work at the permanent establishment in the country where they're based, which means their employment income would be taxed in that country, he said.

For employers, this could mean withholding tax obligations, social security contributions and the need to set up a payroll, Tonge said, and at that point, "already you've gotten into some complexities and administrative burden."

Employers should also be wary of another effect caused by a new permanent establishment: the possibility that a taxable presence could be created in a third country, based on how the relevant tax treaties treat remote services.

For example, an employee who normally works in the U.S. may be providing remote personal services — such as customer support — to people in Canada. The U.S.-Canada tax treaty doesn't classify remote services as "performed or provided" in Canada, and therefore they wouldn't give rise to a permanent establishment.

However, if the person from the U.S. were stuck in Switzerland indefinitely because of travel restrictions, the Canada-Swiss tax treaty would kick in, according to Patrick McCormick, a partner at Culhane Meadows PLLC. That treaty, he said, might not provide the same insulation for remote services as the U.S.-Canada treaty and thus could create a permanent establishment in Canada.

"Each treaty needs to be evaluated on its own merits," McCormick said. "That's really the big variable that comes into play."

So far, tax administrations don't appear to have issued guidance specifically for situations in which companies find themselves with an unexpected permanent establishment. However, governments have recently taken steps to provide a suite of protections for individuals who find themselves working in another country, according to Tonge.

"These are scenarios that perhaps are not at the forefront of what governments and taxing authorities are addressing, understandably," he said. "It may be something that in due course we hear more of" in terms of determining a permanent establishment risk.

Meanwhile, the United States Council for International Business recently wrote to Treasury citing the relocation of employees as one of the group's "high-level concerns that have arisen as a result of the global pandemic."

USCIB asked Treasury to adopt policies that treat employees as continuing to work in the location where they conducted business before the outbreak for the purpose of determining permanent establishment in addition to other matters.

"COVID-19 has abruptly and dramatically changed where people work due … to travel restrictions, borders closing and guidance to remain at home," USCIB's executives wrote in the March 23 letter. "In many cases, workers live across a border from their office."

As for what Treasury and other tax administrations might end up doing for companies with workers in these situations, VanderWolk at Squire Patton Boggs said he didn't think there was any precedent for such relief.

"But in these extraordinary times, anything is possible," he said.