Law360 (April 6, 2020, 8:52 PM EDT) -- Arizona's secretary of state said Monday she won't argue against backers of four ballot question campaigns, including two tax petitions, who had asked the state Supreme Court to compel her to let them gather online signatures amid the novel coronavirus. 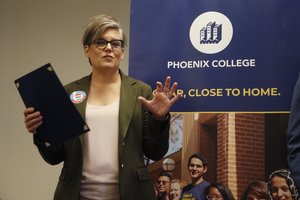 Arizona Secretary of State Katie Hobbs said that given the novel coronavirus pandemic, she would not oppose allowing supporters of four ballot questions to gather signatures electronically. (AP)

Secretary of State Katie Hobbs said in a statement that expanding E-Qual, the state's online signature gathering platform — currently only available for political candidates — to the petitions this year would be reasonable given the current public safety concerns. Political action committees, or PACs, backing the petitions lodged a complaint Thursday against Hobbs, alleging that the state discriminated against their constitutional rights by barring their participation in E-Qual.

Hobbs didn't push back on those claims Monday, saying that she wouldn't object to them and would instead let the justices know that her office could adhere to the PACs' requests to let them use the online signature-gathering platform. An adult-use cannabis question and a proposed income surcharge on high earners are among the four questions supported by the PACs.

"Given the challenges to in-person signature collection caused by the COVID-19 pandemic, allowing initiative campaigns to use the E-Qual system, as some candidates already do, is a reasonable option for protecting public health and supporting continuity in our democratic processes," Hobbs said.

However, Hobbs, a Democrat, criticized Republican Attorney General Mark Brnovich, who intervened in the case on Friday. Hobbs said his actions could prolong the litigation and a potential outcome in favor of the PACs. Brnovich filed a motion to intervene in the case Friday, and the court granted it that day.

"We can and should make reasonable accommodations in light of the global pandemic, and I'm concerned that the attorney general's request delays action," Hobbs said. "I hope that the court will recognize the need for workable solutions."

Brnovich's response to the PACs' brief is due April 17, according to the court's docket. Roopali Desai of Coppersmith Brockelman PLC, who represents the PACs, told Law360 on Monday that Brnovich had the opportunity to intervene because there was a constitutional challenge to a state law. She said she doesn't know what the attorney general's position will be, but added that she assumes he will oppose the PACs request to access E-Qual.

"That is disappointing because the [attorney general] should be on the side of Arizonans and not on the side of politicians and special-interest groups that have long opposed voter initiatives," Desai said.

A representative of Brnovich did not immediately respond to questions.

The petition to legalize recreational cannabis, called the Smart and Safe Arizona Act, would impose a 16% tax on sales of adult-use marijuana and mainly use the revenue to fund colleges, police and fire departments and the state's highway fund.

The Invest in Education Act is a different iteration of a question the state's highest court knocked off the ballot in 2018 after finding the proposition's description undersold the scope of the proposed tax hikes.

Each potential ballot question must garner 237,645 signatures by July 2 to qualify for the Nov. 3 election. The PACs filed their brief straight to the state Supreme Court, saying the dispute must be resolved quickly to determine whether they can continue their signature-gathering efforts.

Given the public safety restrictions in place to curb the spread of COVID-19, the illness caused by the virus, barring initiative petitioners from using E-Qual violates the state constitution's guarantees of equal protection, due process and free speech, the PACs said.

"Denying the initiative proponents access to E-Qual under the current state of emergency violates their right to vote under the U.S. Constitution, a violation that can be remedied by narrowly ordering the secretary to give them access to that system, albeit limited in duration," the PACs said in their brief.

The adult-use cannabis petition currently has "just under" the number of signatures needed to qualify for the ballot, while the income tax petition has gathered approximately 85,000 signatures, according to the PACs' brief.

Desai told Law360 that she was pleased that Hobbs said she wouldn't oppose the PACs' requests to be permitted to gather online signatures because she believes that would be the only way to place the petitions on equal footing with political candidates, especially in light of the pandemic.

"Indeed, it is my view that allowing my clients to use E-Qual is the only solution that simultaneously protects their constitutional rights and the health and safety of all Arizonans," Desai said.

Hobbs' office provided Law360 with her statement but did not immediately respond to further questions.

Representatives for the campaigns did not immediately respond to questions.

The PACs are represented by Roopali Desai and D. Andrew Gaona of Coppersmith Brockelman PLC.

Counsel information for Hobbs and Brnovich was not immediately available.