Law360, London (April 16, 2020, 2:11 PM BST) -- The European Commission believes that efforts to reform corporate taxation as well as work to combat tax fraud are essential tasks, and therefore they will continue as planned despite the COVID-19 pandemic, according to a draft document seen by Law360 on Thursday. 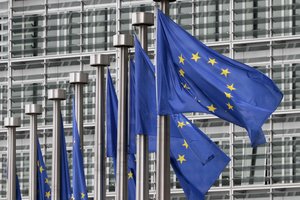 The EU's executive arm plans to issue a communication on fighting tax evasion, according to a draft document. (AP)

The commission is planning to stick to a timetable, set earlier this year, to issue a communication that would involve the tax challenges of moving to digital technology. It also plans to issue another in this quarter on fighting tax evasion, according to the text of a draft work program.

"Both action plans are strategic priorities for the commission, concerning fair taxation, the fight against tax fraud and the simplification of tax systems," according to the document, which was undated.

"In particular, the action plan on business taxation will take stock of the ongoing [Organization for Economic Co-operation and Development] discussion on the reform of the corporate taxation framework," it said. "This is particularly relevant for the recovery phase, during which member states will need to broaden their tax bases to finance the growing deficits. In that regard the fight against tax fraud and the taxation of multinational companies are essential."

The commission declined to comment on the document in line with its policy of not speaking about draft texts.

The document is an annex to a revised work program, which would adjust the version that the commission published in January setting out its plan for the year.

The draft document is color coded: items due to carry on as planned are in green, those that can be slowed down are yellow and those that should be put on hold are shaded in red. The business taxation action plan and the fight against tax fraud are green.

The proposal to stick to current timetables comes as policymakers race to reach a consensus on the two "pillars" of the OECD's program to redesign corporate tax policy by the end of the year. The pillars involve a realigning of some taxing rights to countries with large numbers of digital users and a global minimum corporate tax.

The OECD has said that despite the widespread economic shutdown and travel bans that COVID-19 has caused, it is still aiming to find a deal by the end of the year. Indeed, it said Wednesday in a document that tax reforms would become more important as economies emerge from the pandemic.

The expected plan on business taxation will be closely watched, as it could provide some insight into what the EU might do should the OECD fail to reach a consensus on its desired tax reform plans.

There was concern, before fighting COVID-19 dominated the minds of policymakers across the globe, that reluctance by the United States to implement fully the first pillar would scupper the project.

The EU's top tax official, Paolo Gentiloni, has said he wants a global deal, and suggested that the dramatic hit that economies are taking as a result the crisis strengthens the case for a digital tax.

"The need to have this is not diminished in these terrible weeks; I could even say it is augmenting," Gentiloni said last week.