Twenty-one percent of New Mexico's counties have five or fewer lawyers, and two counties have no attorneys at all. These legal deserts, a huge access to justice barrier, have forced the state court system to take a hard look at possible solutions.

In May, the New Mexico Supreme Court announced it has formed a work group to consider one idea in particular: allowing nonlawyer "limited license legal technicians" to provide civil legal services to people unable to find, let alone afford, a licensed attorney.

District Judge Donna Mowrer, who oversees courts in two counties that have just 58 total attorneys for a combined population of nearly 70,000 people, told Law360 that the inspiration for the idea came from Washington, which has allowed limited license legal technicians, or LLLTs, to help low-income litigants in family law disputes since 2015.

After New Mexico Chief Justice Judith Nakamura sent a cohort of staff and judges to observe Washington's concept last year, Judge Mowrer said she began thinking about bringing it home to the Land of Enchantment.

"We don't have extra attorneys in the rural areas, and we've seemingly priced even the middle class out of an attorney," Judge Mowrer said. 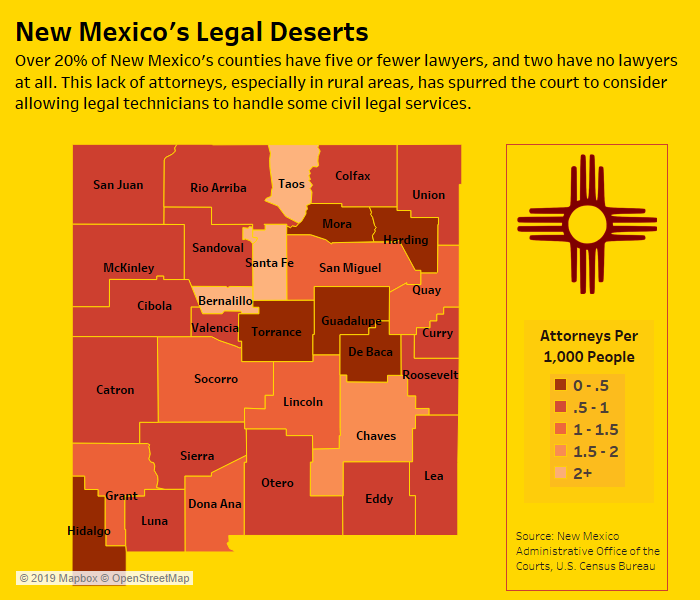 
According to the May 21 announcement, Judge Mowrer will chair a work group that includes lawyers, paralegals, law professors and even a journalist representative of one county with no lawyers. The group will submit a report by January on whether court rules and programs could be changed to improve the availability of legal services in the state.

A spokesperson for the New Mexico Administrative Office of the Courts told Law360 there will be an opportunity for public comment on any proposed court rules changes.

The report is expected to cover topics like what the licensing requirements should be as well as what types of services LLLTs should be authorized to conduct. Washington limits their licenses to family law, while Utah has a similar program for landlord-tenant and debt collection disputes, Judge Mowrer said.

"We may start with one are and see how it goes," she added.

The move comes against a backdrop of increasing self-representation in New Mexico.

The state's Administrative Office of the Courts reported that 51% of newly filed civil cases in 2018 had at least one party without an attorney. That's a marked increase from 2011, when pro se litigants appeared in just 36% of civil cases.

Judge Mowrer noted that the idea has garnered "pretty positive feedback" from the state bar, despite the fact that alternatives to lawyers could cut into the industry's market demand. When Utah proposed its program ahead of adopting it in September, some commenters questioned whether it would cause more problems than it solved.

Washington has also faced resistance when considering whether to expand LLLT service areas beyond family court. Judge Mowrer told Law360 that a key selling point is the notion that firms can actually have LLLTs in their offices to accommodate those who can't afford a traditional counsel.

"They would be filling an unmet need," she said.

She also pointed out that firms need not be limited by geographic area. Being based in a city like Albuquerque won't necessarily prevent a firm from hiring a technician in a rural area.

Any concerns about potential unauthorized practice of law, she said, should be assuaged by the fact that a representative from the state high court's disciplinary board is in the work group.

"I specifically asked the chief justice to put people on the committee who will challenge us to do the right thing and focus into the areas where we need to focus," Judge Mowrer said.

"We're envisioning if someone comes to a technician for an unauthorized case, they'll be trained enough to say, 'I'm sorry, I can't help you, here's an attorney who can,'" she added.