The Judiciary Committee voted along party lines to set the schedule for advancing Judge Barrett's nomination after two days of questioning. 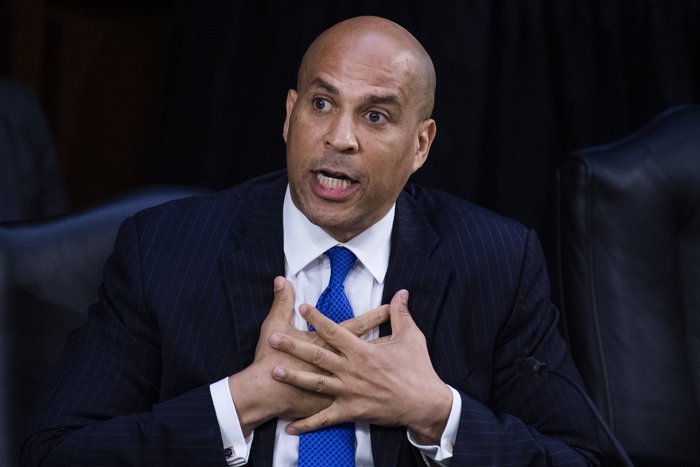 Senators' written questions for the record are due Friday; the judge will have a few days to respond to the dozens or hundreds of queries covering prominent legal issues as well as senators' lesser-known hobbyhorses. Another party-line committee vote is expected Oct. 22 to send the nomination to the Senate floor for confirmation a few days later.

After Thursday's vote, Democrats made an unusually direct and personal pitch to the Republicans sitting across the room.

In 2016, as Republicans held open a high court seat that opened in February, Graham told the committee, "If there's a Republican president [elected] in 2016 and a vacancy occurs in the last year of the first term, you can say Lindsey Graham said let's let the next president, whoever it might be, make that nomination."

"Senators have always kept their word," Leahy said, warning of potentially "irreparable" damage to the institution.

Graham countered that the heated confirmation process for Justice Brett Kavanaugh changed his mind; he has previously charged Democrats with smearing the nominee by springing allegations of sexual assault in the 1980s.

"Some of the greatest acts in American history are when people had the authority to do something and they showed the restraint of power and didn't use that authority," Booker said. "This is one of those moments, where that is the kind of grace that can stop the tumbling of this institution further towards what I think will be a real constitutional crisis."

A Rhode Island Democrat warned of consequences in the future, perhaps alluding to dramatic changes like expanding the Supreme Court.

"Don't think when you have established the rule of 'because we can,' that should the shoe be on the other foot, you will have any credibility to come to us and say, 'Yeah, I know you can do that, but you shouldn't,'" Sen. Sheldon Whitehouse said. "Your credibility to make that argument at any time in the future will die in this room."

Republicans on the panel largely sat back and let Democrats make their appeals, which may have targeted voters more than colleagues. Booker conceded that "this goose is pretty much cooked." Sen. Richard Blumenthal, D-Conn., later told reporters that "the fight this morning shows that we are determined to oppose this nomination."

After two hours of speeches, the American Bar Association's judicial evaluation panel presented a detailed report. The group interviewed hundreds of relevant people and the judge herself before awarding its top rating of "well-qualified."

The panel's leaders recounted unanimous praise from lawyers who practiced before Judge Barrett, scholars who worked with her and students she taught. The ABA also assembled an academic group to review her scholarship and a practitioners group to assess her three years of Seventh Circuit opinions.

The ABA panel concluded Judge Barrett had "an excellent reputation for integrity and outstanding character," a powerful intellect and a judicial temperament open to opposing views and collegial in disagreement.

However, a minority of the ABA panel voted for the middle "qualified" rating. There was no explanation from the dissenters, but it marked the first time in nearly 20 years a Supreme Court selection did not draw a unanimous top rating. In 1991, now-Justice Clarence Thomas received a "qualified" rating with a minority voting "not qualified."

A Michigan family physician, Dr. Farhan Bhatti, told of patients who benefited from Medicaid expansion under the ACA, like a diabetic who could afford insulin.

West Virginia resident Crystal Good described seeking an abortion at age 16 and needing a judge's permission because her mother was opposed and the state had parental-consent rules; she said she feared Judge Barrett would not protect abortion access.

The GOP's witnesses testified to the nominee's personal qualities.

Laura E. Wolk, a former student of Judge Barrett and the first blind woman to clerk at the Supreme Court, praised her as a compassionate and dedicated mentor who went above and beyond to ensure she received the adaptive technology she needed.

The hearing closed with the panel's top Democrat, Sen. Dianne Feinstein of California, thanking Graham for "one of the best set of hearings that I've participated in." The pair hugged.

The goodwill gesture by Feinstein, who is in line to chair the committee if Democrats take the Senate next month, irked Judge Barrett's activist opponents.

Progressive advocacy group Demand Justice, which has criticized Feinstein's opposition to dramatic changes like ending the filibuster, quickly called for her to step aside after "thanking Republicans for the most egregious partisan power grab in the modern history of the Supreme Court."

Democrats acknowledge they have little chance of derailing the process. They could try to block next week's committee vote by boycotting the meeting, since the panel's rules require two members present from the minority party. However, Graham has previously had Republicans vote to proceed regardless and said Thursday that he would do so again.

Once on the floor, the GOP plans to quickly send Judge Barrett's nomination to the Supreme Court.

"We have the votes," Majority Leader Mitch McConnell, R-Ky., told reporters Thursday. "She'll come out of committee a week from today and we'll go straight to the floor and confirm her over the next three, four days."

Senators must vote in person, which could pose an issue if there are new coronavirus infections or quarantines, but previously infected or quarantined Republicans have already recovered and returned.

Just a handful of Republicans might break with the party. Maine Sen. Susan Collins has committed to opposing confirmation before Election Day. Alaska Sen. Lisa Murkowski said she opposes a preelection appointment but has not committed to voting one way or another. Utah Sen. Mitt Romney announced Thursday that he would vote yes.

The only unknown on the Democratic side is Arizona Sen. Kyrsten Sinema, who has said only that she would evaluate Judge Barrett as she would any other high court pick.