Will Barrett Deliver Pivotal Vote To Strike Down The ACA?


Law360 (September 29, 2020, 8:05 PM EDT) -- Democrats are understandably scared that Judge Amy Coney Barrett will vote to vaporize the Affordable Care Act if she joins the U.S. Supreme Court. But whether she'll actually do so, much less deliver a decisive fifth vote against the landmark law, is far from clear.

Liberal lawmakers and activists began sounding alarm bells even before President Donald Trump announced Saturday that he would nominate Judge Barrett, a conservative on the Seventh Circuit, to replace the late Justice Ruth Bader Ginsburg, a progressive who was sure to reject a pending GOP challenge to the 2010 health care statute. 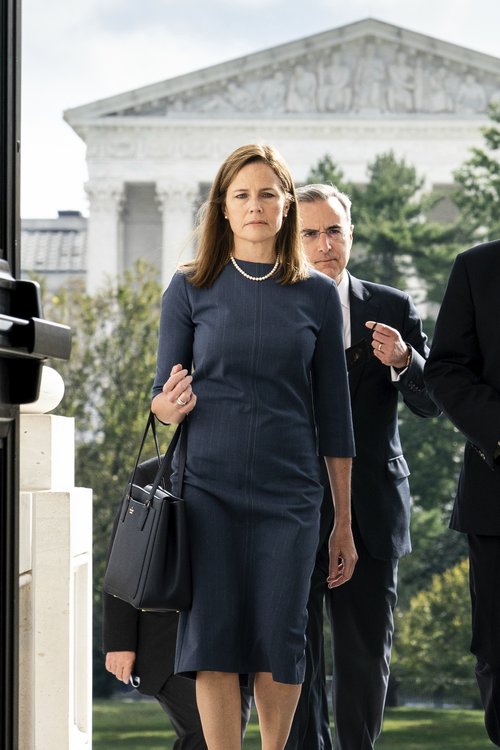 Katie M. Keith, who teaches ACA courses at Georgetown Law, told Law360 the concerns are "absolutely" warranted. She noted that shortly after the announcement, Trump wrote on Twitter that seeing his predecessor's signature achievement "terminated in the Supreme Court" would be "a big WIN for the USA!"

"You have to look no further than President Trump's statements the day after her nomination," Keith said. "The expectation is that she will vote that way, at least from the president who is putting her in place."

The consternation among Democrats stems largely from Judge Barrett's past criticism of two Supreme Court decisions — both authored by Chief Justice John Roberts — that saved the ACA from grave legal threats. Judge Barrett fertilized those fears even further at Saturday's announcement ceremony by saying she shares the judicial philosophy of the late Justice Antonin Scalia, who selected her for a clerkship in the late 1990s and dissented from both decisions upholding the ACA.

"Voters should be very clear about one thing: President Trump and his party and Judge Barrett will overturn the Affordable Care Act," Sen. Kamala Harris of California — the running mate of Democratic presidential nominee and former Vice President Joe Biden of Delaware — said in a speech Monday.

It's true that many observers expect Judge Barrett to agree with Republican state attorneys general that the ACA's individual mandate to maintain health insurance, previously upheld under congressional taxing powers, became unconstitutional when Congress eliminated its tax penalty for noncompliance.

But legal experts with varied ideological views told Law360 they aren't sure Judge Barrett will further agree that the mandate's importance means the entire ACA, or at least its protections for Americans with preexisting conditions, must fall as a result.

The case will be argued Nov. 10, by which time Judge Barrett may be Justice Barrett. The main legal issue to be argued is "severability" — whether the mandate, if deemed unconstitutional, can be severed from the rest of the ACA.

Before joining the Seventh Circuit in 2017, Barrett penned a law review article that recalled how Justice Scalia complained that Obamacare "should be renamed 'SCOTUScare' in honor of the court's willingness to 'rewrite' the statute in order to keep it afloat." But she doesn't appear to have published much about severability, which tends to be less divisive than the statutory interpretation issues that were central to the earlier ACA cases.

Ilya Somin, a right-leaning professor at George Mason University's Antonin Scalia Law School, told Law360 that if Judge Barrett were inclined to torpedo the ACA, she'd likely be in the minority when the case concludes.

"Even if Amy Coney Barrett decides that it's not severable — and there's no reason for thinking that she would decide that, but hypothetically, let's say that's her view — I think there still won't be five votes for that proposition on the Supreme Court," Somin said.

The high court's three liberals are virtually certain to leave the ACA unscathed. The law's supporters are also optimistic that Justices Roberts and Brett Kavanaugh — authors of recent opinions that deemed individual statutory provisions invalid but also severable from broader laws — will join them on everything but the mandate's constitutionality.

Epstein Becker Green member Stuart Gerson, who served as a high-ranking U.S. Department of Justice attorney in Republican and Democratic administrations, told Law360 there's a good chance Judge Barrett would wind up in that camp as well.

"It wouldn't surprise me, assuming that Judge Barrett is confirmed as a justice, that she well could go along with a significant group of other justices and hold that the offensive provision is severable, and the rest of the ACA can go on," Gerson said.

Georgetown Law's Keith told Law360 she expects a 5-4 decision preserving almost all of the ACA, with Justices Roberts and Kavanaugh siding with the liberals. But Keith added that the next-most likely scenario would see a fractured court decline to invalidate the entire ACA but nonetheless knock out its preexisting-conditions protections.

The logic for the latter outcome would probably work like this: The ACA's legislative findings call the individual mandate "essential to creating effective health insurance markets." In 2012, the Obama administration said that phrase "effectively serves as an inseverability clause" with respect to the preexisting-conditions protections. Democrats now argue that the mandate was essential to creating markets, but not essential to maintaining markets — a distinction that perhaps won't prove persuasive.

"I think there are going to be sympathetic views toward finding an inseverability clause in the legislative findings, which could really lead them to strike down the [preexisting-conditions] protections," Keith said.

A ruling of that sort would likely be unpopular. In a poll last year by the nonpartisan Kaiser Family Foundation, 72% of respondents said it was "very important" to preserve the ACA's guarantee that people with preexisting conditions can't be denied coverage.

And a ruling that wipes out the entire ACA would be deeply controversial, given that the law covered about 20 million Americans even before the coronavirus pandemic triggered enormous job losses that drove many Americans into the ACA's health insurance programs.

"If you threw out the Affordable Care Act, you'd be left with just a huge number of people who [could] be without insurance," Gerson said. "So, in a sense, both the easy way out and probably the right way out is just to sever the noxious provision."

The justices, of course, are ostensibly beholden first and foremost to reach the correct legal result, even if that result has some troubling consequences. And if Judge Barrett is confirmed, "she [and] several of the other justices are not going to consider exogenous circumstances, like what's going on in the world," Gerson said.

That's not likely to stop members of Congress from prodding Judge Barrett during her confirmation hearing, which starts Oct. 12, about the real-world impact of nullifying the ACA. And it's possible she'll be quizzed about her general views on severability — the sort of technical legal question that would be harder to dodge than an inquiry about, say, whether Roe v. Wade

"I expect a lot of questions about severability to come up during the confirmation hearing," Keith said.

And as the ACA case plays out, it's probably wise to expect the unexpected. Many scholars scoffed at the first ACA challenges, filed shortly after the law's passage in 2010, and yet they very nearly succeeded in bringing down the entire law in 2012. Academics and lawyers also forecast long odds for the ACA's second set of major challenges, which sought to curtail the law's subsidies, but they notched a D.C. Circuit victory and wound up at the Supreme Court before failing in 2015.

The current ACA case is widely seen as even weaker than the first two. And yet, a Texas federal judge in 2018 fully accepted the case's theory, and the Fifth Circuit in 2019 agreed that the mandate is unconstitutional but otherwise punted, simply telling the Texas judge to better explain the rest of his reasoning.

"The Obamacare litigation has a history of surprising people and [defying] expert predictions," Somin said. "I don't deny that could happen this time. And it could happen to my predictions as well as anybody else's."