Suits Show Conflict Even At BigLaw's Best Places For Women

Law360 (May 29, 2018, 10:07 PM EDT) -- Women have been gaining ground at firms like Ogletree Deakins Nash Smoak & Stewart PC and Morrison & Foerster LLP in recent years, but lawsuits against these firms and others suggest it'll take more than raising women's headcount to bring about true parity in the industry.

Over the five years Law360 has published its annual Glass Ceiling Report, both Ogletree Deakins and Morrison & Foerster have expanded the number of women they employ as lawyers or call partners, a sign of progress toward gender diversity.

The number of female equity shareholders at Ogletree Deakins, for instance, has doubled since the first Law360 survey was published in 2014. That growth has helped propel the Atlanta-based employment giant to near the top of Law360's list of best firms for female lawyers.

But a pair of recent lawsuits reflect a sense of discontent at these prestigious law firms. These suits respectively allege that Ogletree systemically holds back its female nonequity shareholders and that Morrison & Foerster discriminates against female associates who take maternity leave or use firm programs for working moms.

Experts say these matters reflect a new willingness by female lawyers to speak out against management structures and decision-making patterns they believe are discriminatory, particularly as it relates to compensation.

They also shed light on new pressures law firms are facing as they try to live up to pledges to support the advancement of women in their ranks.

Arin Reeves, president of the consultancy Nextions, said she believes many law firms act in good faith when they say they value gender diversity and are working to achieve it. But most, she said, are willing to only go so far.

Firms often broadcast their efforts to improve gender diversity and support female lawyers, but the Glass Ceiling survey has shown how slow and incremental progress for women in the profession is. 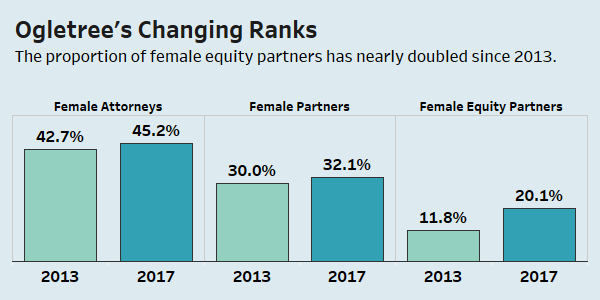 Women now account for about 35 percent of lawyers at surveyed firms, and they've inched up to about 20 percent of all equity partners.

Ogletree Deakins, on the other hand, can boast that 45 percent of its lawyers are women, while Morrison & Foerster can say that nearly a quarter of its equity partners are female — statistics that land them high on Law360's rankings.

Yet they still face claims that the way they make decisions on pay, promotion and credit for work is stacked against their female attorneys.

"There is a difference between having ample representation of women in the ranks at a law firm versus treating women equally once they're there," said David Sanford, chairman of Sanford Heisler Sharp LLP, whose firm represents the plaintiffs suing Ogletree, Morrison & Foerster and other firms.

In the case of Ogletree, former nonequity shareholder Dawn Knepper says the firm's systems and male-dominated leadership have kept women like herself from receiving the credit and opportunities they deserve, including a chance to join the firm's equity partnership, while certain male counterparts have been rewarded regardless of whether they've pulled their weight.

At Morrison & Foerster, three anonymous associates have alleged that the firm has delayed promotions and pay raises to women who've taken maternity leave or used other in-house programs for working moms.

Speaking to Law360, Sanford said the lawsuits aren't meant to paint a picture that women are miserable at those firms. "We're not saying women shouldn't consider working there. We're saying that there are pockets of problems, which represent in our view a systemic problem."

For their part, the firms dispute these discrimination claims.

In a statement after it was sued in April, Morrison & Foerster said it has a "long and proven track record" of supporting associates who return from maternity leave and said it is "confident that the firm will be vindicated." A firm spokeswoman had no further comment for this story.

Ogletree previously said it takes the allegations by Knepper and three other former nonequity shareholders who've joined her suit "very seriously."  But the firm also defended the way it decides partner compensation as "fair and equitable" and done in a transparent manner.

In an interview with Law360, Ogletree's managing shareholder, Matt Keen, wouldn't comment on the case beyond the firm's earlier statements. He instead pointed to the gains women have made in the firm as testament to its commitment to equality.

"Diversity has been a strategic objective of the firm. It's something we're conscious of," he said.

Even before facing a lawsuit, Ogletree was out front trying to highlight its efforts to promote gender diversity in its ranks.

In a January press release issued prior to Knepper's suit, the firm trumpeted that it has been promoting women to shareholder at a rate higher than the national average. Eight of the 11 attorneys most recently promoted to nonequity shareholder were women, as were six of the last 12 attorneys elected to be equity partner.

Keen also noted in the interview that three women now sit on the firm's nine-member board of directors and that two of the four members of the compensation committee are women. 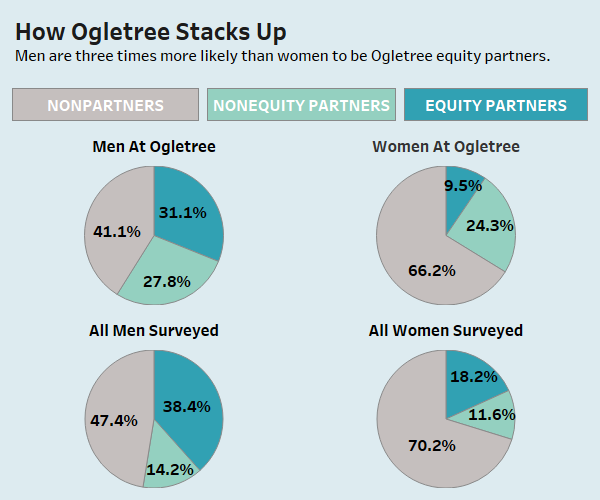 Law360's Glass Ceiling survey data reveals Ogletree has more than doubled the number of women in its equity partnership since the survey was first taken. At the end of last year, the firm had 36 female equity partners, up from 17 at the end of 2013.

Women now make up 20 percent of the firm's equity partnership, largely mirroring the industry overall. However, among all women at the firm, 9.5 percent were equity shareholders at the end of last year, compared with 18 percent of women at all firms surveyed.

Keen said the gains in the partnership reflect the firm's evolution as women come up through the ranks, rather than an intentional push to promote women at a faster clip.

"It's a natural progression," he said.

Keen predicts those numbers will continue to rise. While the firm doesn't set specific targets for gender diversity, he said it's possible Ogletree's equity shareholder tier could one day approach 50 percent female.

At Morrison & Foerster, women have gained ground in its all-equity partnership over the years, growing to just under 24 percent of the overall partnership from about 18 percent as of the end of 2013.

There's no shortage of ideas about how firms can improve women's representation in law firms and address the issues that lead to lawsuits and high rates of attrition among female lawyers.

Angela Beranek Brandt, current president of the National Association of Women Lawyers, said her organization has found when women are in leadership roles at firms, from heading practice groups to serving on management committees, it goes a long way to resolving issues that otherwise crop up.

"It gives women an opportunity to be in the room when important decisions are made," said Brandt, a partner at Larson King LLP. "If you have a compensation committee that has three or more women on it, then all of the women do better in terms of compensation."

Hilarie Bass, current president of the American Bar Association, is hopeful that a yearlong project the association has underway will help firms understand why so many women leave the legal profession by the time they reach the midpoint of their career, and what can be done about it.

The association's report and initial recommendations are due out later this year. If they are adopted more broadly, it could lead to lasting, equitable change in the industry, Bass said.

"We want to make sure the legal profession is hospitable for women and diverse attorneys, that they perceive it as an even playing field that they can take part in as long as they want to practice," said Bass, who is also co-president of Greenberg Traurig LLP.

And then there are those sacred cows.

Reeves of the consultancy Nextions said firms need to take a hard look at themselves and how they are doling out things like business development credit, pay and promotions to see if these systems truly are fair and free from implicit bias.

For example, Reeves noted that most firms focus on ranking individuals when awarding credit for developing new business. But her studies have shown that women consistently want a team-based approach to giving out business development credits.

Adapting to these needs and others is important as firms look to bring on new generations of diverse lawyers, she said.

"You want more people in, you've got to change somewhat," Reeves said. "Friction leads to lawsuits."