For the first time, the U.K. government was requiring large employers in the country to report their gender pay discrepancies, and law firms in particular were putting forth shocking results.

Were these top law firms really doing that much better? Or were the numbers not telling the full story?

The highest paid tier at law firms is made up of partners — that is, owners, not employees. Many firms had interpreted the law's requirement that they report the pay gap for employees to exclude partners, making the pay gap appear much smaller than it would if the full workforce were included.

The fallout for firms was swift. In a May 15 hearing before Parliament, Slaughter and May's director of human resources faced fierce criticism from Rachel Reeves, chair of the House of Commons business select committee, for what she called "bogus numbers."

Data that includes partners "is showing the true percentage of women in the top quartile of the organization," Reeves told Slaughter and May's Louise Merkle, "not the bogus numbers that Slaughter and May has published."

Slaughter and May was far from alone in its decision to exclude partners from the data. 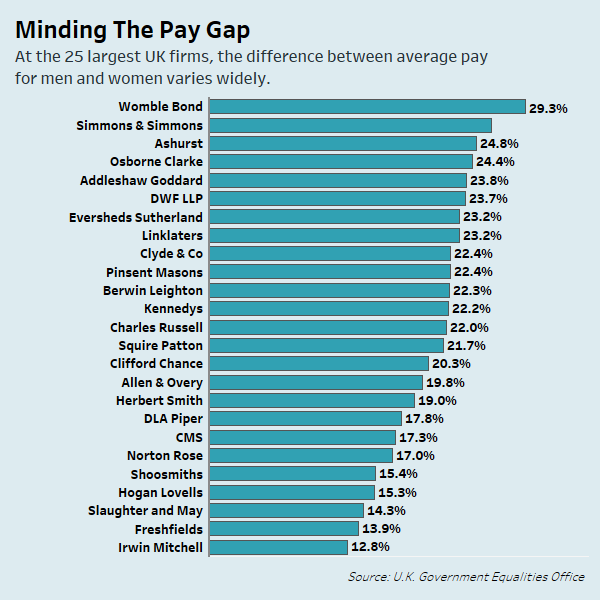 A Law360 review of the 25 largest law firms in the U.K. by attorney headcount found that 10 published data on partner compensation during the pay gap reporting this spring. Five of these included partner pay as a separate category that didn't affect the employee pay gap calculation, and the other five separated out partner pay while also including it in their overall pay gap figure.

Meanwhile, 15 of the 25 largest law firms excluded it altogether. The largest U.K. firms are tracked by the legal directory Chambers.

Amid the public outcry, some but not all of these firms provided additional information on partner pay after making their initial report. But the varied approaches to reporting the information ultimately resulted in an apples-to-oranges view of the industry that provides little in the way of useful data.

With year one of reporting in the books, legal industry watchers are anticipating what firms will do next time around.

Some predict law firms will retrench, minimizing what they report to keep the extent of their equity partner-fueled pay gaps under wraps. Others expect law firms to instead be driven by widespread criticism to begin reporting their partner pay.

Law360's Glass Ceiling Report, released Tuesday, shows law firms in the U.S. are making only incremental progress toward increasing opportunities for women, with representation at the equity partner level at just over 20 percent.

While industry data on representation is available, pay equality — as in the U.K. — has been much harder to gauge because of U.S. firms' resistance to sharing information on partner compensation.

Lisa Hart Shepherd, founder and CEO of the consultant Acritas, said the U.K. firms that did disclose partner pay demonstrated they recognize the issue by showing transparency, despite the negative results they've reported.

"It sets a baseline for moving forward in trying to make some improvements," she said.

The Spirit of the Law

The ability to use the information to make strides in gender parity was one of the reasons behind Clifford Chance LLP's decision to include its partner compensation gap in its report this spring, said Laura King, the law firm's global head of people and talent. The firm disclosed the metric as a discrete figure while also releasing a calculation of the workforce pay gap that included partners.

The industry's reports met an April 5 deadline to comply with the nation's Equality Act, which was passed in 2010.

"For us, we had to think: What is the legislation trying to get you to look at?" King said. "And what would be helpful to us when thinking about the issue and how to do something about it?"

Clifford Chance reported a mean hourly pay gap of 20.3 percent for employees only — placing it in the middle of the top 25 firms — but when including partners that figure grew to 66 percent.

To address its pay gap, the law firm has formed a working group in its London office with the goal of furthering the careers of women. According to its report, the firm also hopes its transparency on partner pay catches on and drives more change in the industry.

Some industry watchers predict the blowback in Parliament may drive a legislative change in which partner pay gap reporting is required, but such a move would not happen until the 2019 reporting season at the earliest. 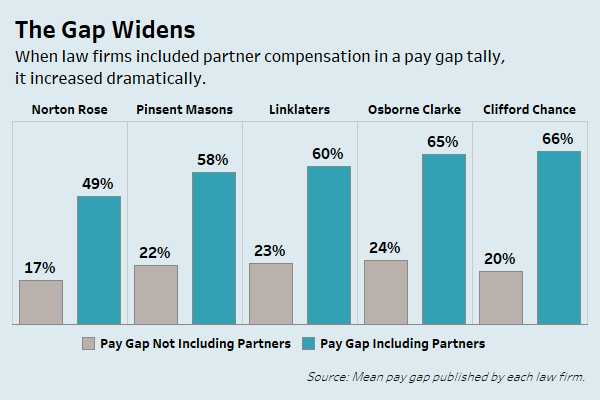 Based on her participation in discussions on the pay gap reports, King predicts that more law firms will include partner information next year regardless of what lawmakers do.

"Even in the absence of a legal change, it's looking like more firms will be taking that proactive step," she said.

Indeed, many legal industry watchers say not providing full pay gap figures could be a big public relations mistake, since such a move could suggest the firm has something to hide.

"Those that did choose to include it had pretty poor results," Shepherd said. "But in an era of increasing transparency, I think it was the right decision."

There's also the question of changing global norms. If partner pay reporting catches on in the U.K., some say, there may be a growing public perception that firms across the globe that refuse to turn over their numbers are part of the problem.

The trend being pushed forward in the U.K. may also have an impact in the U.S., said Jill Huse, founder of the consultant Society 54.

"As law firms are more global, we will see more pressure and an evolution happening," she said. "I think there's a perfect storm right now when it comes to women's equality."

But not everyone agrees the legislation will drive change in the legal industry — globally or even in the U.K.

One reason is that law firms can make what they want of the data, which creates an environment in which the usefulness of the information, at least as it stands now, may be compromised.

Under the current framework, a law firm that excluded partner pay could not be compared apples-to-apples to one that included it, and even the methods for calculating partner pay differ among the firms that reported it.

"We're in a bit of a mess at the moment," said Tony Williams of legal management consultancy Jomati Consultants LLP.

Some law firms complied with the law and then were criticized for doing so, he said. Some then submitted more information despite the fact it was not required, while others did not, and in the end the industry was left with "useless" data.

"It's the classic thing where, unfortunately, politicians aren't necessarily the brightest people on the planet, and their ability to think things through more than a second and a half is limited," he said.

Even if the data were straightened out, some predict there will be a large number of law firms that only cough up the information required by law.

The gender makeup of the equity partnerships of law firms in London could scare many large firms away from reporting their partner pay gap figures next year, even those that reported it this year, said Nick Crasner of Crasner Consulting.

Firms risk losing female talent when they learn the law firm's gender pay gap at the partner level is steep, and female partners will likely review the results across the industry and choose to join law firms with smaller gaps.

"I see law firms wanting to increasingly not declare specific information to the public," Crasner said.

But even if the law firms were fully transparent, some say the current regime for reporting pay may not provide the clearest possible picture of gender imbalances.

Other factors could help paint a fuller picture, such as how many women join the firm, how many stay for five or more years, how many make partner, and what the pay gap is within those upper-echelon roles, Williams said.

"Those are the questions that should be asked," he said.