For Matthews Johnson, the search felt daunting. Only a small number of the firms she initially looked at had women of color in the top ranks.

"Are these firms ready to have a woman of color in a position of authority?" she remembers thinking at the time. "I was concerned about whether firms in certain markets could handle me in the role I expected to be in."

BigLaw's lack of gender and racial diversity has become a dispiriting, self-fulfilling prophecy: Few women of color enter private practice, discouraged by the industry's lack of diversity. Fewer still rise to partnership, driven down — and often out — by isolation and lack of opportunity.

For the first time this year, we asked law firms for data on their minority female lawyers as part of our annual Law360 400 survey. According to the responses, women of color make up 8 percent of attorneys surveyed, a number that dwindles to 3 percent at the partnership level.

Meanwhile, last year's summer associate class was 18 percent minority women, a number that has steadily gone up since 2007, when minority women made up 13 percent of that group, according to data from the National Association for Law Placement.

These are grim numbers for an industry where clients are demanding more diversity — both in gender and race — from their outside counsel teams.

But the handful of firms that are outpacing their peers on attracting and retaining women of color do shed some light on what it takes to bring female minority attorneys into the fold: visibility, a voice at the table and advancement opportunities. 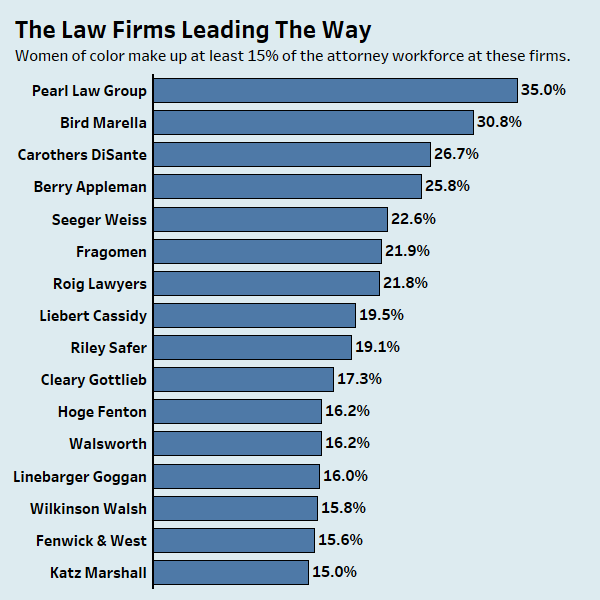 
A Lack of Community

At the forest-level view, decades of diversity talk and programs have largely failed to bear fruit for BigLaw.

Of the more than 300 firms that responded to Law360's survey, just under 5 percent — or 16 firms — have minority women making up 15 percent or more of their ranks, keeping approximate pace with the industry's summer associate hiring. Most of those firms have fewer than 100 attorneys. Only three have more than 300.

Daphne Bishop of Carothers DiSante & Freudenberger LLP, a black attorney who is a child of immigrants, told Law360 that joining a large law firm is not often attractive to women of color.

"A lot of black women I know didn't even try to go down that road," she said.

Some top turn-offs: BigLaw's billable-hour marks and competitive nature, which too often push a burn-the-candle-at-both-ends ethos that can be hard for working mothers, and little opportunity for success, given how few women of color you see in its top ranks, according to experts. That's why so many minority women decide to go in-house or into government roles instead, continuing to exacerbate the lack of community that turns women of color away from private practice.

Bishop bounced around several large firms in the early part of her career, never quite feeling like she fit in with the male-dominated cultures, until she landed at the 45-attorney Carothers DiSanti, a California-based employment firm. At the end of last year, its ranks were composed of 27 percent minority women, and its name partners include a black man and white woman.

Drawn in by a reduced schedule that fits in with her lifestyle as a mom to twin 8-year-old boys, Bishop has stayed in part because she believes she can go to her bosses if she has an issue and because she has finally found a collegial atmosphere that she feels comfortable in.

That sense of community is an asset BigLaw almost always lacks, according to attorneys who spoke with Law360.

For women of color in BigLaw, when conversations turn to partners and colleagues' personal lives, it can be hard to connect in the small talk. And few have anybody that matches their demographics to go to when they feel left out.

"You don't get to vent and be your authentic self for eight hours-plus. That wears on you," said Patricia Brown Holmes of Riley Safer Holmes & Cancila LLP. "It's a death by a million bee stings."

At the two-year-old Riley Safer, Holmes and her fellow partners have been proactively trying to create community at the boutique, which at the end of last year had 68 attorneys, 19 percent of whom were minority women.

Every so often, an attorney from the firm's Chicago base will run to the Target down the street to pick up olives, cheese, beer and champagne — Holmes' favored drink — for an impromptu happy hour. Sometimes, clients join in.

"It engages everyone and creates a camaraderie," she said.

In April, Holmes was elected to lead Riley Safer, making her the first black female managing partner of a national law firm with more than 50 lawyers that is not women- or minority-owned, according to the firm.

A Voice at the Table

Along with community, however, women of color are also looking for opportunities to be heard and recognized. 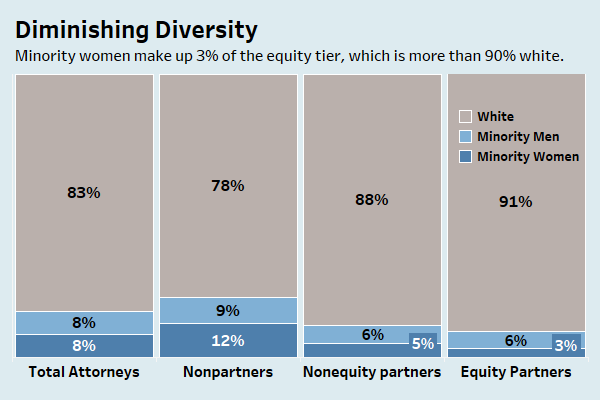 "Some of our research suggests that one of the biggest difficulties is that often women of color remain invisible within their organizations, particularly within law firms," said Carlos Davila-Caballero, director of diversity and inclusion for Cleary Gottlieb Steen & Hamilton LLP.

Cleary is one of the few large law firms to have a significant percentage of women of color — 17 percent of the firm's 698 attorneys last year were minority women. A large part of what makes Cleary different from its BigLaw brethren is that the firm constantly looks to remove blind spots that might keep leadership from recognizing talent, Davila-Caballero said.

On top of bias training and engaging experts in this area to speak to its attorneys, Davila-Caballero personally tries to make it a regular habit of asking senior partners about who is on their team and what those team members are working on. He hopes senior partners will shy away from relying on the delegation of a senior associate and be more mindful of giving opportunities to more diverse attorneys.

Such opportunities can have far-reaching effects as more women of color see attorneys who look like them doing high-level work.

Nearly 20 years ago, Audrea Golding, a black woman whose parents are from Jamaica, was an associate in a Canadian law firm when she found herself working with a co-counsel team from the immigration firm Fragomen, Del Rey, Bernsen & Loewy LLP.

"It was the first interaction I had with the most female partners as I ever had in my career," Golding said.

She got the sense that there was a high level of responsibility and autonomy given to female lawyers, not just partners, which led her to join the firm when she moved to the U.S. Of the firm's 360 attorneys at the end of last year, 22 percent were women of color, which is the largest percentage for any of the law firms with over 300 attorneys that Law360 surveyed.

Golding has been with Fragomen for 18 years now. Three years ago, she relocated to the firm's Toronto office, a base that has grown in significance as trade issues between the U.S. and Canada have gained prominence under the current administration

"One of the other great things about the firm, it allows you to develop practices or clients in spaces where it's not always traditional," Golding said. "The firm is willing to take risks on its lawyers to develop their own client base and some practice areas to really allow us to grow."

For most women of color, they simply want an opportunity to do good work and rise up the law firm ladder without their gender or race — or the socioeconomic factors those might tie in to — getting in the way.

For some groups, the barriers they face can start well before they get to law school.

For example, research has shown that black and Hispanic law school applicants are less likely to have a parent or family member who can offer guidance about entering law school, according to Tiffane Cochran, a research director at AccessLex Institute's Center for Legal Education Excellence, a nonprofit dedicated to understanding the barriers that impede access to law school. They also generally have more family or work responsibilities while enrolled.

Black and Hispanic law school applicants are also "less likely to have taken an LSAT prep course to help them earn a higher score and, by extension, law school merit aid," Cochran said.

Many BigLaw firms tend to recruit only out of the most prestigious law schools, which experts say can put some minority attorneys out of the running from the beginning, because recruiting from a smaller pool limits the number of racially diverse attorneys under consideration.

At places like Katz Marshall & Banks LLP — whose 20 attorneys at the end of last year were 15 percent minority female — that matters less, however. Harini Srinivasan, an Indian-American associate, said she was glad the firm considered her even though she didn't go to a top 15 law school.

"I felt less trapped by a lot of traditional ideas of prestige in the legal field," said Srinivasan, who has recently been working on a number of sexual harassment cases that have surged in the wake of the #MeToo movement.

At Liebert Cassidy Whitmore, whose 82 attorneys last year were 19 percent minority women, the firm has knocked out some of the barriers that can keep women of color from rising to partnership. The firm has dropped high billable-hour requirements and given all attorneys flexibility with their schedules, for example.

"My son was 3 years old when I made partner," said Melanie Chaney, a black attorney who started as an associate at the firm in 2007. 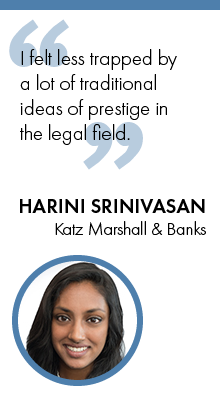 Chaney was worried that having a child would knock her off track or cause her career to stagnate. But in the year she was elevated to partner, two other women also made the cut. All three were moms to younger kids. Chaney doesn't think it was a calculated move — it just happened to be where the women were in both their careers and personal lives.

"Everyone just does what they do and they value what everyone brings," Chaney said.

That feeling of being valued — and being given a chance to climb upward — is critical for both young associates and seasoned partners who are women of color.

In searching for a firm that would offer those opportunities, Matthews Johnson made a call to a fellow Latham alum, Beth Wilkinson, about the firm Wilkinson had recently launched.

The litigation boutique Wilkinson Walsh & Eskovitz, which is headed into its third year of operation, has made a concerted effort to build a diverse workforce. The firm had 38 attorneys at the end of last year, and more than 15 percent were women of color.

In September, Matthews Johnson joined as a partner, with the firm giving her the flexibility — and opportunity — to split her time between D.C. and Alabama.

"I do think there is an issue at law firms," Wilkinson said. "We are trying to undo that pattern, and I think we've been successful."

Corrections: An earlier version of this story incorrectly stated Audrea Golding's role in the Toronto office and when she first worked with Fragomen as co-counsel. Those errors have been corrected.