When Tricia Moriates started her job as a principal law clerk for the Nassau County Supreme Court in New York, she couldn't have been happier. She enjoyed the work. The salary and hours were good. But then one day in 2011 things took a turn.

Moriates was in the middle of talking about a case with her boss, Justice Robert Bruno, in his chambers when she said he placed his hands on her shoulders and remarked that she looked tense. Startled, she stood up to face him, and Justice Bruno kissed her, putting his tongue into her mouth, she said.

Before she could react, a janitor came in to clear the trash, and Moriates took that moment to leave. The next day, Justice Bruno seemed apologetic and suggested they forget about the other day, she said. For Moriates – a married mother of two who didn't just like the job, but needed it – that's all she wanted to do at the time.

"I was afraid," Moriates told Law360 in a February interview. "I had gone back to work after my husband's business tied to commercial real estate had gone under. … I knew our livelihood depended on it."

Moriates' claims are now the subject of a suit against Justice Bruno and the New York State Unified Court System. But it's difficult to tell how isolated this suit is or how prevalent such claims against judges really are. Every state tracks the problem differently — if at all.

Law360 spoke with dozens of state judges, court administrators, judicial conduct review commission directors, court employees, civil rights lawyers, defense attorneys and legal industry experts. We reviewed data on judicial misconduct complaints in 50 states and the District of Columbia over the last 10 years. What we found was not evidence of a larger problem, but often, no evidence at all. 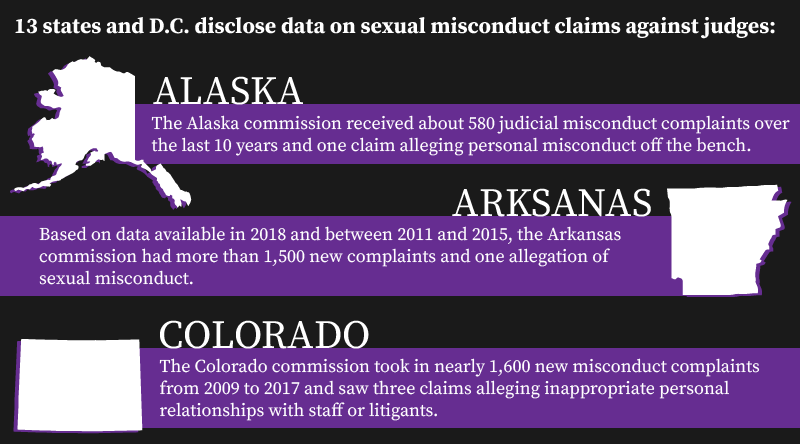 Cracks in the System

Judicial conduct commissions receive and investigate misconduct complaints against judges, and while many of them provide general details on the claims they receive, most don't share data on sexual harassment claims. And there is no way to obtain data on how many state judges nationwide are accused of sexually harassing their subordinates.

Fourteen judicial commissions currently disclose the number of complaints that involve sexual harassment claims against judges, either by including the data in their annual reports or providing it upon request. But the picture gets murkier from there.

Most of the other commissions don't disclose this complaint detail in a quantifiable format, or they lump it into more generalized categories – if they even track it at all. Some say they don't have the staff or resources to do more right now. Georgia, Indiana, Ohio and Virginia didn't respond to requests for information on what details they release, though Georgia posts sexual discrimination data in its annual reports.

General judicial misconduct complaint numbers across states don't tell us much either. Some commissions, like in California, Texas and Indiana, have seen increases in recent years, while others have seen numbers remain steady or even decrease slightly.

However, it's difficult to put a lot of stock in those numbers. Most complaints are brought by litigants unhappy with the results of their lawsuit. The proper venue for such a claim is appellate court, and so about 90 percent of complaints end up getting dismissed each year as a result, according to the National Center for State Courts.

Of the 14 commissions that share numbers on sexual harassment claims against judges, 10 of those separately share how many general judicial misconduct complaints are brought by court employees. But due to confidentiality provisions, no commission discloses how many of those are sexual harassment claims. And there is good reason for that. Confidentiality rules can help protect everyone's privacy, including a judge from a meritless attack. 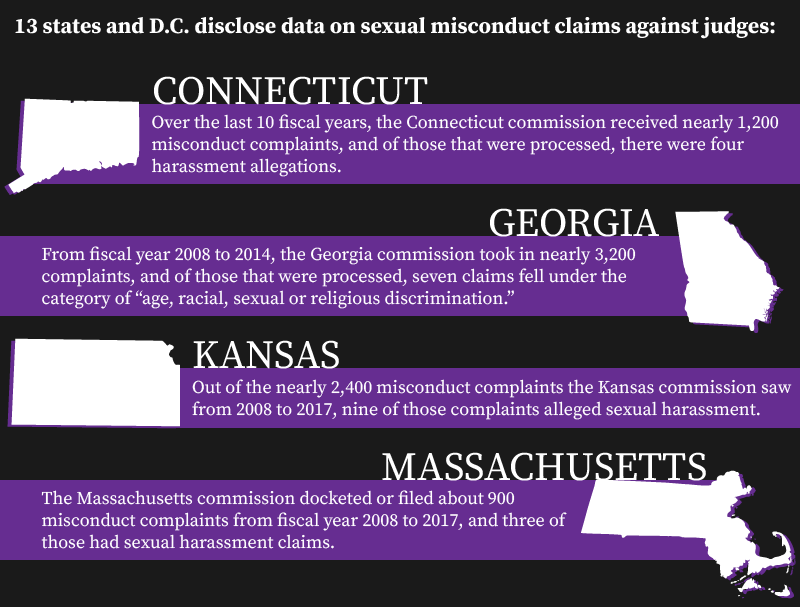 But some court watchers say greater transparency is needed for tracking complaint details and patterns at the state court level.

"One of the things we've learned from #MeToo is that complaints are often not isolated," said Elizabeth Tippett, an associate professor of the University of Oregon School of Law. "There may be multiple complaints over a period of time, and if that's happening, you don't want to lose that information."

David Sachar, head of the Association of Judicial Disciplinary Counsel and executive director of Arkansas' judicial discipline commission, has compiled a list of about 70 cases over the last three decades where state judges were disciplined for inappropriate sexual conduct with staff, attorneys or litigants and related misconduct, such as indecent exposure and viewing pornography at the courthouse. 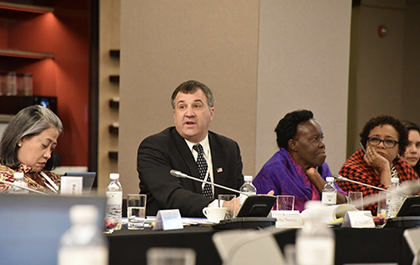 "There are a lot of cases nationwide that involve inappropriate relationships between judges and staff or lawyers who appear before them," Sachar said. "It proves the point that this issue needs more sunshine so that the bar knows about it and the judiciary knows as well."

He said it's important for the public to know the good and the bad with public officials, including the judiciary.

"The thread through all of this is sexual misconduct can't be kept secret," he said. "Hiding it doesn't help."

After she rejected his many overtures, the judge began leaving resumes for the principal law clerk position on her desk and warning her that she could be terminated at any time, according to the complaint. She continued to be wary of reporting the behavior, saying she'd seen other court employees get fired or transferred without explanation. She said she didn't trust that court officials would handle claims against a judge fairly.

If you are suffering from sexual harassment at the hands of a state judge, you have a few choices to make. You can takes steps to file a lawsuit. You can go to the state judicial conduct commission. Or you can go through the court's own complaint process. And that's where some complaints get stuck, never to see the light of day.

"Most often these claims get diverted, buried or ignored when employees go to human resources or the court administration or when they complain to another judge," said an attorney in California, who asked to remain anonymous to speak frankly about the issue.

The attorney, who has handled sex harassment cases against judges in the state over the years, said he has seen sex harassment and other employee claims of judicial abuse get swept under the rug. Sometimes court officials convince an employee to transfer to resolve potential claims, or they delay the investigative process for more than a year. More often than not, employees who are investigating on behalf of the court are scared of the judges. 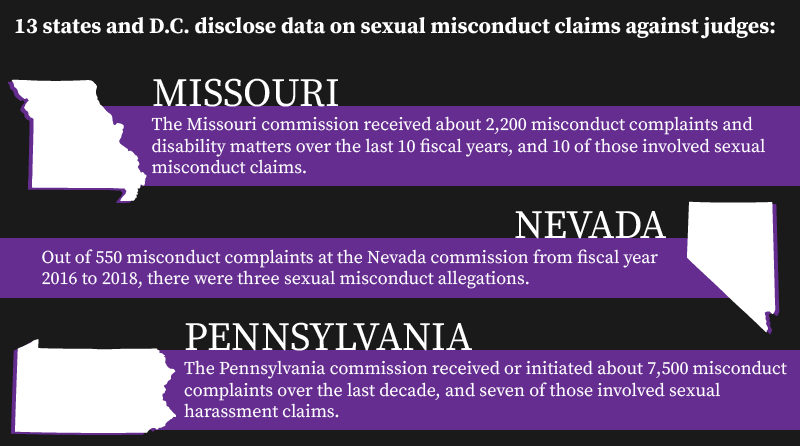 "It's a rare exception that someone in the rank and file has the chutzpah to refer a complaint to the [Commission on Judicial Performance]," the attorney said.

When claims are reviewed by judicial conduct commissions, it can be a slow, opaque process, and the lack of openness raises concerns over whether commission investigations are able to stay above powerful influences – the judges, politics and an old boys' network – said a former court employee who is familiar with the complaint process in Pennsylvania.

"It is so one-sided," said the former employee, who asked to remain anonymous. "Judicial conduct boards take 100 percent of your information, and they give you no information back. It's like you're entering into this dark tunnel, and you have no idea" whether there is a light at the end.

In addition, the uneven power dynamics between judges and court employees and the way some state court systems are structured can deter employees from ever raising a complaint, according to sources.

"There is a lack of an HR department in most judiciaries, and judicial clerkships and other judicial jobs are held in close quarters, usually in an atmosphere of secrecy," Sachar said. "This power imbalance is huge, which can lead to obvious issues here." 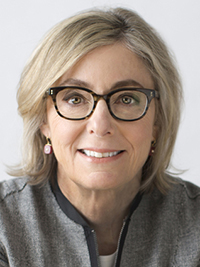 Deborah Gordon is a civil rights lawyer in Michigan.

In Michigan, where all state judges are elected, it can be tough to pursue claims against a judge because there is no clear gatekeeper who is responsible for the elected official's actions, said Deborah Gordon, a civil rights lawyer who has brought sexual harassment cases against private employers.

State district court judges are not vetted to the same degree federal judges or higher level state judges are, Gordon said. In some smaller, local courts, there can be a mentality among some judges that they're "king of the castle," and they can do what they want, she said.

By 2015, Moriates was pregnant and things with Justice Bruno had gotten worse, she told Law360. He asked if he could touch her stomach, and when she reluctantly agreed, he suddenly groped her breast and kissed her, she said.

She pushed him off and left chambers, she said, and their working relationship grew strained. The judge fired her in a text message in 2016 while she was on maternity leave, she said, stating he decided to "move in a different direction." 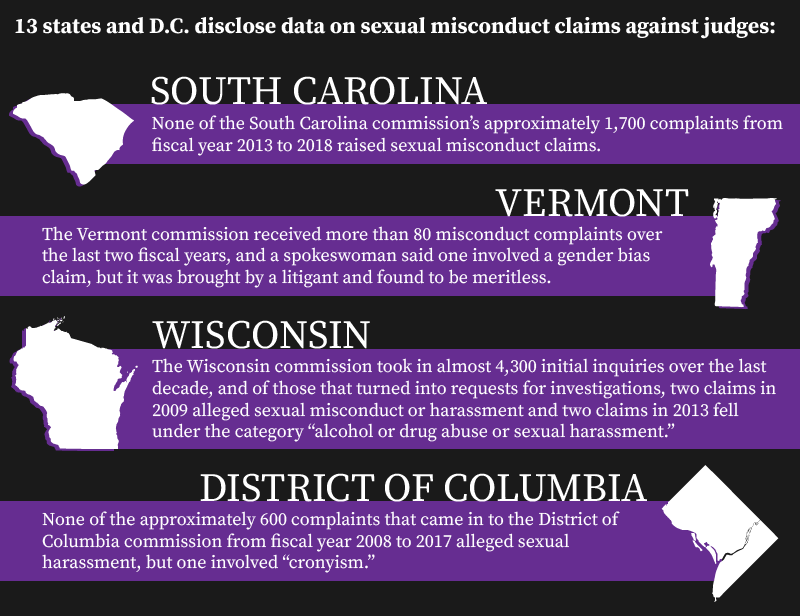 Moriates said she has sought recourse ever since. In August 2017, she filed a federal suit in New York against the judge and the state court system, and it is among several pending sexual harassment suits in federal court against New York's judges and court system.

"I got fired because I didn't want to have sex with him," Moriates said in an interview. "Now he still sits on the bench, and I don't have a job. … He's earning a paycheck, he gets his pension and vacation and all those things. I'm left scrambling."

New York State Unified Court System spokesman Lucian Chalfen said Moriates took her case to the media and the U.S. Equal Employment Opportunity Commission before meeting with the court system's bias investigators. He said if the court system substantiates judicial misconduct allegations, it turns the findings over to the state judicial conduct commission, and it has done so in the case against Justice Bruno. The judicial commission didn't confirm or deny the existence of any complaint, but Moriates said she was interviewed.

"The Unified Court System takes all allegations of sexual harassment very seriously," Chalfen said. "[The pending cases] were all comprehensively investigated by our inspector general." 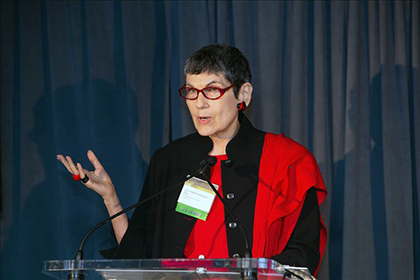 Ultimately, it may be these kinds of federal suits accusing the system of not responding properly that bring the issue of sexual harassment in the state judiciary to light and create a catalyst for change, said Lynn Hecht Schafran, director of Legal Momentum's National Judicial Education Program.

"By and large, it would seem the plaintiffs have found the court disciplinary system so unsatisfying and nonresponsive that they have turned to the federal courts and turned these complaints into formal lawsuits," she said.

But it can be a long haul.

Moriates is still struggling to find a stable job. She has sent out more than 100 resumes and tried networking, but she thinks her suit against a judge gives potential employers pause.

"A lot of people said to me: 'If [Justice Bruno] is on the bench, who is going to hire you?'" Moriates said. "Two and a half years later, I guess they were right. He's still on the bench, and I'm unemployed. What's the justice in that?"

Erin Coe is a features reporter for Law360. She last wrote about the growing number of female clerks at the U.S. Supreme Court. Editing by Anne Urda, Jocelyn Allison, Pamela Wilkinson and John Campbell.