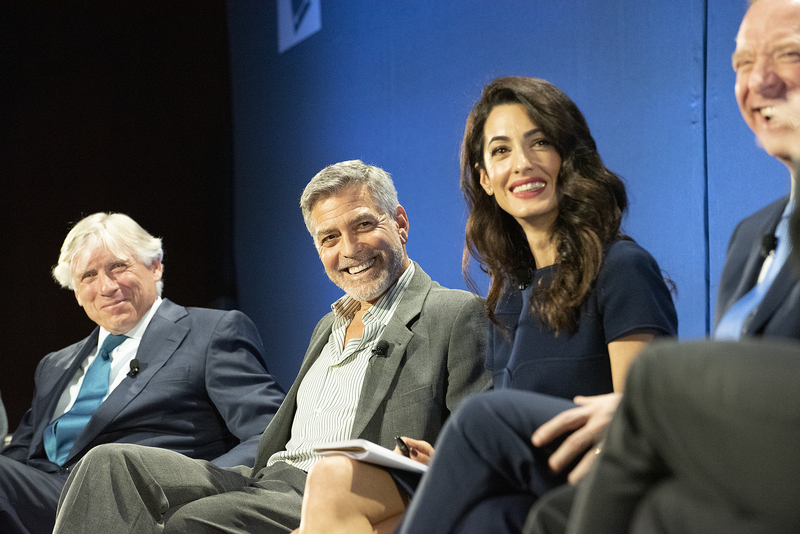 
It's not every day the former United Nations high commissioner for human rights makes fun of George Clooney's basketball game while the presidents of Microsoft and Columbia University look on.

Through U.N.-designed online training, the Clooney Foundation program will equip people around the world to attend trials where the law may be used to target minorities or government critics. Using a Microsoft app connected to cloud services, these monitors will take digital notes on each trial's fairness.

During the launch event, Nicholas Kristof, a New York Times columnist, moderated a panel that sometimes saw participants like Al-Hussein and actor Clooney vying for time on the microphone.

At one point, the veteran Jordanian diplomat quipped, "I used to play hoops with George and Amal — she always passes the ball, but George, he has to go for that three-pointer."

The room tittered, marking one of the lighter moments in a discussion that focused on the potential of court-monitoring to shine a light on international human rights abuses that occur under the auspices of justice.

The launch followed a daylong TrialWatch conference for Columbia Law School students that featured appearances by former President of the Maldives Mohamed Nasheed and Filipino-American journalist Maria Ressa, both of whom have faced justice abuses abroad.

We need people to be angry and to care. ... That doesn't mean send money — it actually means tell us about trials that you're worried about. Volunteer to be a monitor. 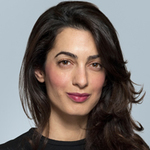 Amal Clooney, having seen Myanmar's highest court on Tuesday decide to leave her Pulitzer Prize-winning clients Wa Lone and Kyaw Soe Oo in prison for six more years on dubious charges, said one of her main takeaways from the day's event was that "apathy is the enemy."

"We need people to be angry and to care," the Doughty Street Chambers lawyer said. "And if you go to TrialWatch.com, you will see a 'get involved' button. That doesn't mean send money — it actually means tell us about trials that you're worried about. Volunteer to be a monitor."

Speaking for Microsoft, Brad Smith said he first sat down with the Clooneys two years ago to discuss their vision to "make the world a witness to what happens in courtrooms around the world."

He called the ensuing app a first-of-its-kind tool that will allow monitors to respond to a set of fact-based questions, capture photos and audio in courtrooms that allow it, and ultimately contribute to comprehensive reports.

These monitors can be anyone, according to Amal Clooney.

"Our monitors do not need to be lawyers, as long as they have completed the training program that we have developed with the United Nations, based on international human rights standards," she said.

The ABA and Columbia will help recruit and deploy the monitors, some of whom have already begun court-watching in countries like Algeria and Zambia. Columbia University President Lee Bollinger said "any student who gets involved in this is going to feel that's a life-changing experience."

"If they get arrested," Kristof asked, "do they get extra credit?"

American Bar Association President Bob Carlson pointed out that the ABA's Center for Human Rights has been monitoring trials since 2011. He said he's learned that just having someone present in the courtroom often makes a huge difference — and TrialWatch will allow the ABA to expand to "trials we could never have reached before."

"Through the technology and training, we can put journalists, laypeople, law students — whoever — in courtrooms," Carlson noted, "and give them the ability to monitor what's going on and report back [in] real-time."

Once enough data has been collected, George Clooney said the TrialWatch initiative, first announced in December, aims to create country-specific reports that could be used to pressure unlawful regimes. But Kristof challenged that notion, pointing out that many dictators are all too happy to trumpet the sort of corruption that the program seeks to uncover.

"Is that light that you shine on unfair trials, is it actually going to help get people free?" Kristof asked.

The actor also pointed out that while you can't always shame governments, you can sometimes shame "good people who are complicit."

He recalled a trip to Chad in which he and Kristof roomed together — "I've got tape you guys don't want to see," he joked — and observed justice abuses stemming from the Darfur genocide in neighboring Sudan.

"And it's funny how quickly things change," he added wryly.