ABA's Bob Carlson On Protecting The Rule Of Law

As the American Bar Association's current president, Bob Carlson wants to make clear that his more than 400,000-member organization has a mission that goes beyond its best known functions like certifying law schools, vetting judges or setting ethical standards for attorneys. 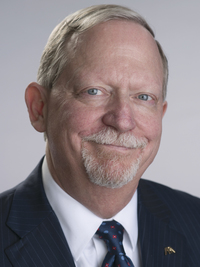 The ABA is also working to promote access to justice around the world through projects such as a new trial watch program, according to Carlson, who started his one-year term in September 2018.

A shareholder with Montana law firm Corette Black Carlson & Mickelson PC, Carlson previously served as head of the state bar in Montana and chair of the ABA's House of Delegates before succeeding Hilarie Bass as ABA president.

When he took the job last year, Carlson stressed the importance of the rule of law and the ABA's role in protecting it. Both the legal community and the country needed "the ABA's strong, national, collective voice as so many other voices — powerful voices — mock due process, ridicule equal justice under the law and scorn our independent judiciary," Carlson said at the time.

Here, Carlson talks about the association's work helping disaster victims, migrant families separated at the U.S. border and others.

The ABA does a lot of different types of work, including a lot with an access to justice focus. What makes the ABA well-positioned to address those types of issues?

We're the world's largest voluntary bar association, and we have connections with state and local bar associations, and other national bar organizations. We have great resources and great volunteers and great staff who are able to bring people together and convene people to assist around the country.

I'll give you a perfect example with respect to natural disasters. Shortly after Hurricane Katrina, we realized that something had to be done, not only to directly assist folks that were displaced but also to plan for the future. One of the things we did was create what's called the "Katrina Rule" or the "Katrina Order."

It was something our policymaking body adopted to use to reach out to a particular state's supreme court when that state has recently suffered a disaster to allow lawyers not admitted to practice in those states to provide pro bono assistance to people who have been victims of natural disasters. So you can be in your office in Montana and help someone in North Carolina.

We coordinate these efforts through a platform called ABA Free Legal Answers. It's designed to help the lawyer and let them just get online and find someone to help.

The ABA also does a lot of work in the immigration arena, too, I understand.

We have contacts around the country with state and local bar associations and we go to them and reach out to help in terms of attorneys to provide pro bono assistance. And again, because we have such a broad scope and so many talented members, we're able to do that in this country and around the world.

[In response to the government's family separation policy,] we partnered with the Luna Foundation to provide social workers to work with our staff to help the children and families that were being united. We also continue to monitor that situation to continue to make sure that the children who are still not reunited with their families get united.

We also are coordinating not only staff but also direct legal representation by our staff in South Texas. Right now we have about 100 lawyers and support staff. We are working to coordinate efforts for pro bono attorneys to come help — helping people fill out forms for credible fear hearings, prepare for hearings.

Given that the ABA is the American Bar Association, it might surprise some people how much work you also do internationally. How does that all fit into the ABA's mission?

Two recent examples are Vietnam, which is trying to develop a more independent judiciary, and Poland, where the judiciary is under attack.

The initiative was designed to spread what we have here, particularly with the independent judiciary. The ABA has long been a vocal spokesperson for an independent, impartial, diverse judiciary in this country, and we have been invited to other countries around the world to assist there as well.

We also have a center for human rights that works with governments to increase justice sector participation and understanding, increasing access to justice in countries around the world. Our center for human rights has been working on a project for a number of years called the Justice Defenders Program, which mobilizes the global community to provide pro bono assistance to at risk human rights advocates and also to observe trials against civil society leaders around the world.

What is one of the things that the ABA does to promote access to justice that you are most proud of?

There are so many things, but one of the most recent examples is the trial watch program.

That collaboration — and the partnership with the Clooney Foundation for Justice and Columbia and Microsoft — will really allow us to democratize trial monitoring around the world and allow us to put the tools in the hands of the people.

They don't have to be lawyers — they can be college students, journalists, community activists, local government officials, everyday businesspeople, etc. The goal is to give them the tools to monitor trials to make sure that the government knows that someone is watching them. Lawyers and nonlawyers alike can work together to raise awareness of fair trial violations.