Access To Justice At The High Court: The Term In Review 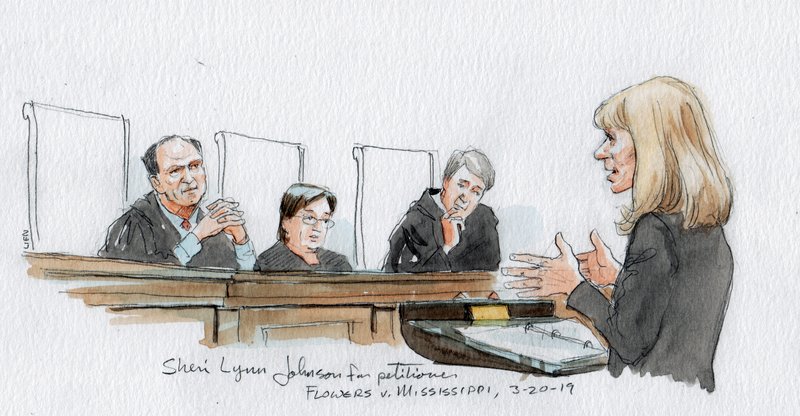 The U.S. Supreme Court's finding in Flowers v. Mississippi, following arguments in March, that a prosecutor engaged in race-based jury selection was among the term's big access to justice moments. (Art Lien, courtartist.com)


The recent U.S. Supreme Court term pleasantly surprised access to justice advocates. While not every case was a win, some of the court's most conservative members found themselves ruling in favor of progressive advocates, often by relying on a strict reading of the Constitution.


Among those conservatives was the court's newest member, Justice Brett Kavanaugh, who upheld a ban on race-based jury selection, writing, "The Constitution forbids striking even a single prospective juror for a discriminatory purpose." Traditionalist Justice Clarence Thomas also took an unusual turn; he backed an opinion that will benefit low-income criminal defendants, citing the Magna Carta.

"Things probably went as well as could have been expected under the circumstances, given the current makeup of the court and the nature of some of the issues with which they were presented," said Ted Howard, the pro bono partner at Wiley Rein LLP who also serves as chair of the American Bar Association's Standing Committee on Legal Aid and Indigent Defendants.

Here, Law360 highlights some of the biggest cases of the term affecting access to justice issues.

decision, the court officially extended the Eighth Amendment's bar on excessive civil forfeitures. The ruling, which could help criminal defendants nationwide fight seizures of their assets, started with a Land Rover.


After Tyson Timbs pled guilty to selling heroin, the state went after the car he drove while dealing. It was worth $42,000, more than four times the maximum $10,000 fine associated with his crime. A trial judge denied the state's forfeiture bid, saying it flouted the Eighth Amendment. Indiana's high court reversed, finding there was no indication that law applied to state jurisdictions.

But writing for the majority, Justice Ruth Bader Ginsburg said under the 14th Amendment, the protection "applies identically to both the federal government and the states." The Timbs decision was unanimous, and though Justice Clarence Thomas disagreed with Ginsburg's invocation of due process, he said that "the historical record overwhelmingly demonstrates" the bar on excessive fines was intended by the Bill of Rights.

The scope of the ruling was small, according to Myesha Braden, director of the Lawyers' Committee for Civil Rights Under Law's criminal justice project. But it has "big implications" for civil forfeitures and criminal fines that she called "an excessive form of punishment," frequently instituted before a defendant is even convicted.

The ruling didn't say what's considered "excessive." Lower courts will litigate the standard, according to Lisa Foster, co-director of the Fines and Fees Justice Center, and they may look to language in the Magna Carta saying fines shouldn't bankrupt an offender.

The high court held firm on its definition of intellectual disabilities with a 5-3 vote in Moore v. Texas

, ruling for a second time in the same case that a Texas court had used the wrong standard when it found Bobby Moore could be executed.


The justices had found in 2017 that Texas' test for determining Moore's mental competency relied on an outdated analysis. On remand, an appellate court found Moore, who'd been convicted in 1980 in the fatal shooting of a grocery store clerk, was eligible for execution under modern medical standards as well.

But that conclusion still rested on dubious metrics, like whether Moore showed leadership capabilities and whether he could respond rationally to questions. In an unsigned opinion in February, the high court said the new finding "suggest[ed] reliance upon what we earlier called 'lay stereotypes of the intellectually disabled.'"

Nicole Austin-Hillery, executive director of Human Rights Watch's U.S. program, called the Moore v. Texas decision one of the term's "pleasant surprises," that suggested "the court is developing a greater understanding for how mental abilities can impact a person's behavior."

That understanding spurred justices to use modern medical standards as they defined what constitutes a mental disability under the law, said Foster, a retired judge and former director of the Justice Department's Office for Access to Justice.

But Foster also said the majority in Moore may have been laying down the law when it said the second finding of competency "too closely resembles what we previously found improper."

That could signal the justices' frustration with "a current in the country that is troubling": the notion that lower court judges can ignore judicial hierarchy. She points to the Alabama Supreme Court's former Chief Justice Roy Moore, who ordered probate judges not to issue marriage licenses to same sex couples after the high court's 2015 Obergefell v. Hodges

"That's just not the way our system works," Foster said. "I think the court may be signaling that it means what it says and expects the lower courts to follow what it says."

In an opinion that could provide a road map for challenges to race-based jury selection, newly minted Justice Kavanaugh wrote in Flowers v. Mississippi

that a state prosecutor had demonstrated a "relentless, determined effort to rid the jury of black individuals."


The case was "an extreme example," Austin-Hillery said, since the same prosecutor tried Curtis Flowers six times for the same murder, and each time the result was either a hung jury or a higher court tossing the verdict due to prosecutorial misconduct. But she added the decision "sends a message to the lower courts that this is not going to be tolerated, even before this court which many people feel is conservative."

The Flowers opinion rests on high court precedent. Under the 1986 Batson v. Kentucky

ruling, parties can't use peremptory challenges — which allow them to dismiss jurors without stating why — to eliminate a juror because of race.

But challenging a dismissal under Batson is difficult, Braden said, because "there are so many ways prosecutors can come up with race-neutral reasons for striking jurors."

What's new about Flowers, she said, is Justice Kavanaugh pointed to specific ways in which jury selection can be discriminatory. He noted that two people had been biographically identical apart from race, and the white one was seated while the black prospective juror was dismissed.

"The ruling has given some clear examples of information that judges can rely on in determining whether something was used as a proxy for race in striking a person from participating as a juror," Braden said.

Last Rites and Rights for Ray and Murphy

The term included several death penalty appeals — not challenging the executions themselves, but how they would be performed. The results were mixed.

ruling, the court blocked the execution of a Buddhist prisoner, Patrick Murphy, because his Texas prison wouldn't allow a Buddhist priest to be with him as he died. Justice Kavanaugh wrote Texas' policy permitting prisoners to be accompanied by Christian and Muslim advisers, but not Buddhist ones, amounted to "denominational discrimination."

But a month earlier, the court had reversed the Eleventh Circuit's stay of execution for Muslim inmate Domineque Ray. His Alabama prison wouldn't allow his imam into the execution chamber, though it made similar accommodations for Christian chaplains. The conservative majority found Ray's establishment clause appeal had been filed too late.

"short-circuits" the appeals process "just so the state can meet its preferred execution date."

It's possible that the court thought Ray's case was a one-off, Howard said, and when a second appeal on the same issue reached them, they may have said, "Well, wait a second, we can't have this be a regular practice where one religion is favored over another. If that means we got the other case wrong, so be it."

The analogy between the religious inequality alleged in the two cases, and the court's own disparate rulings may have contributed to "the passion with which competing justices expressed their views," Howard said.

The Ray case also reflects a decades-old tension in death penalty appeals, Howard said. Inmate advocates believe "a meritorious constitutional claim irrespective of how it was raised deserves the court's full consideration," while the court maintains an "interest in the finality of resolutions, almost irrespective of the merits."

That tension came up again when the court rejected death row inmate Russell Bucklew's argument that Missouri's lethal injection drug, pentobarbital, would cause tumors in his head and neck to rupture.

decision that the Eighth Amendment's bar on cruel and unusual punishment "does not guarantee a prisoner a painless death," and added it was unlikely Bucklew could make a compelling case for a less painful alternative, "assuming, of course, that the inmate is more interested in avoiding unnecessary pain than in delaying his execution."

In his dissent to the Bucklew decision, Justice Stephen Breyer invoked Ray, and criticized his colleague's concerns about timeliness.

"It might be possible to end delays by limiting constitutional protections for prisoners on death row," Justice Breyer said. "But to do so would require us to pay too high a constitutional price."