Inside The Mind Of A Sentencing Judge

By his own estimate, U.S. District Judge Frederic Block has sentenced more than a thousand people to jail in the course of his judicial career. And while the system strives to eliminate disparities, he concedes in a new book: "There is no uniformity in the sentences judges hand out." 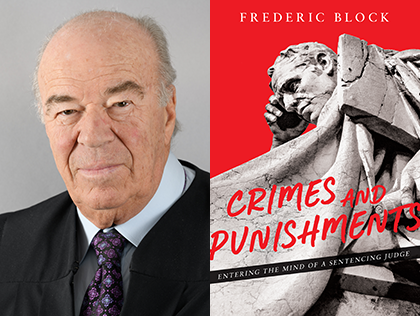 In sentencing, Judge Block has weighed the impact of convicted felons' actions on their victims, considered the uncharged or acquitted conduct a convict was implicated in, and striven for detachment amid criminal trials that boil over into public spectacles, all while wrestling with internal motivations that he may scarcely be aware of.

The internal calculus of a sentencing judge has been an especially ripe topic in the years since the Supreme Court's 2005 decision in U.S. v. Booker, which unshackled federal judges from imposing required sentences and gave them much more discretion. But in the judge's telling, he always kept his eye on the big picture.

"I never felt terribly strapped in pre-Booker, because there is a part in the sentencing guidelines that allowed you to consider the totality of circumstances, if they rose to a level of great concern," Judge Block told Law360. "And I would do that all the time."

In his third book, "Crimes and Punishments: Entering the Mind of a Sentencing Judge," the senior judge from the Eastern District of New York reflects on seven cases, which each illustrate a different dynamic of the sentencing process and the judge's personal considerations that are inevitably in play.

More than anything, he hopes his book gives readers a "heightened appreciation for the degree of difficulty, on the human level, that all judges face at having to decide whether to deprive someone of their liberty," he said.

Over lunch at a diner across the street from the Downtown Brooklyn courthouse, where he is warmly greeted by servers as "Judge," the 85-year-old jurist explained that the book is intended to inspire judges to speak out about the aspects of the justice system that trouble them and to help the public understand what he calls "the toughest part of the job."

Mandatory minimums, in particular, and the way in which they can usurp judicial discretion to satisfy political ends, are one of the book's principal concerns and one of Judge Block's primary banes.

"[Legislators] decide what crimes should be prosecuted, they often decide what the punishment should be for the crimes," the judge told Law360. "They're not necessarily acting as judges are supposed to act when [having] those discussions. When a judge makes a decision, it's supposed to be entirely nonpolitical. But when Congress makes a decision, it's loaded with political considerations."

In the book, Judge Block employs a nimble narrative mode pitched to a general audience to convey the relevant facts and law of each case, touching on prosecutors' and defense counsel's arguments, as well as details about defendants' circumstances and victims' suffering. He also takes the additional step of infusing the book with fragments of autobiography, where he shares scraps of personal history and contemplates how they shaped his judgment.

The interstitial memoir pieces, which appear in italics, include a reflection on the death of his brother Sheldon, who died in 1969 of a self-inflicted stab wound while using LSD. The judge thinks of him "whenever I have a drug case," he said.

Another chapter, involving the sentencing of defendants convicted of trafficking young women from Mexico and forcing them into prostitution, begins with an admission that Judge Block thought of his daughter often during the case, even as he acknowledges the importance of separating "emotional baggage" from the case at hand.

"Crimes and Punishments" isn't the first time Judge Block has used his writing to bring a wider readership into his chambers. In 2012, he published a memoir about his career as a federal trial judge titled "Disrobed." Amid the positive notices he received was a personal phone call from fellow district judge-turned-writer Michael Ponsor, the author of two novels about tough cases overseen by a federal district judge in Massachusetts, who encouraged him to try his hand at fiction.

Judge Block's second book, the 2017 novel "Race to Judgement," fictionalized a series of high-profile cases, including a 2003 criminal trial over a murder during the 1991 Crown Heights riots and a wrongful conviction civil suit against New York City that eventually settled. The judge said the book is in the process of being adapted into a television pilot.

While collaborating on the adaptation, Judge Block sent the screenwriter a draft of a nonfiction piece he had written years earlier and subsequently shelved, regarding the case of David Fitch.

Fitch had been found guilty of multiple counts of fraud, but the trial judge ruled in sentencing that prosecutors presented persuasive evidence that, in order to commit said fraud, Fitch must also have committed a murder, and factored that into his sentence.

Judge Block sat on a Ninth Circuit panel that in 2011 upheld the sentencing of Fitch, effectively for a murder for which he was not charged.

Once again encouraged by another writer, Judge Block developed the material into his latest full-length book, an examination of the legal, personal and logistical factors in play when a judge renders a sentence.

The Fitch case became the first chapter of "Crimes and Punishments," and serves as a "stark example of the extraordinary power of the sentencing judge — and, by contrast, the relatively minor role of the jury," Judge Block writes.

The profound power of the bench weighs heavily on the judge throughout the book, and the notion of sentencing-judge-as-God appears in two wildly different contexts: one in which the judge bristles at a defense attorney making the comparison, and another in which he volunteers it while speaking to a defendant.

But as "Crimes and Punishments" unfurls, one of the issues Judge Block wrestles with is where that power reaches its limits.

"I tell people I sentence when I have to impose a mandatory minimum: I'm not sentencing you. People down in Washington sentenced you," the judge told Law360. "I'm just telling you what the sentence is."

If mandatory minimums place an onerous restriction on the bench, one thing jurists should not be constrained against, Judge Block argues fiercely, is educating the public about what they perceive as flaws in the justice system, as he did in a 2016 sentencing opinion that brought him a wave of public attention.

As recounted in the book's final chapter, shortly before imposing a sentence on a young woman convicted of drug trafficking, Judge Block had completed reading Michelle Alexander's "The New Jim Crow." In her book, Alexander delves into the raft of state and federal laws that bar someone with a criminal record from wholly reentering society.

Judge Block recounts how Alexander's examination of the history and ramifications of these "collateral consequences" had a profound impact on his approach to sentencing.

Inspired by "The New Jim Crow," Judge Block requested that the attorneys in the drug trafficking case submit opinions outlining the specific collateral consequences the convict would face, and to weigh in on whether the judge could legally consider them when imposing the sentence. It was the first time he had ever made such a request.

Sufficiently convinced that it was lawful for him to consider those consequences as factors, he imposed a sentence of one year's probation, even though the advisory sentencing guidelines were 33 to 41 months. He penned a forceful 42-page opinion explaining why he was now "allowing a clearly guilty drug courier to escape prison," he writes in the book.

The opinion ended with him exhorting legislators to reexamine the use of statutory penalties for released convicts. It drew an outraged editorial from the New York Post, which accused him of trying to "rewrite laws," but an array of attention and praise from national publications as well as apparent concurrence from the conservative Heritage Foundation think tank.

It was, he writes, the most important case of his career, and collateral consequences remain one of his animating concerns.

"There's no effective check and balance against the legislative branch at the federal and state level just piling on all of these hurdles that a person out of jail has to jump over to be able to engage in meaningful rehabilitation," Judge Block told Law360.