Law360 (March 6, 2020, 8:42 PM EST) -- The presiding judge of the federal court covering Seattle and Tacoma on Friday halted all in-court proceedings for the foreseeable future due to the new coronavirus, while Los Angeles-area federal courts told jurors and attorneys to stay home if they feel sick. 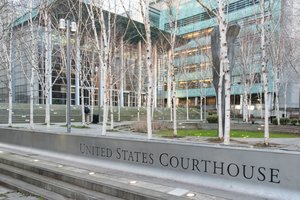 The federal courthouse in Seattle, where all in-court proceedings have been suspended because of the coronavirus. (Getty)

In a three-page general order, Chief U.S. District Judge Ricardo S. Martinez of the Western District of Washington wrote that the move is warranted due to the more than 50 confirmed cases of the virus, known as COVID-19, in the county where the court is located.

Judge Martinez wrote that to fulfill local public health authorities' recommendations that employers try to avoid bringing large groups of people together, the court is ordering all civil and criminal matters scheduled for an in-court appearance to be continued until a further order from the court.

Exceptions may be granted on a case-by-case basis in matters that don't require a jury, however, with the court to make that call after consulting with counsel. The continuance also doesn't affect matters that can be resolved without oral argument, according to the order.

Grand jury proceedings are also continued and for criminal cases that are affected by the order, the delay caused by the continuance will be excluded from the deadlines set by the Speedy Trial Act.

The Seattle and Tacoma federal courthouses will remain open, the district clerk's office will be available by telephone and intake desks will remain open for filings, according to the order.

Judge Martinez put a roughly three-week deadline on the freeze, writing that it must be vacated or amended by March 31, 2020.

A spokesman for the district court declined to comment Friday.

The Washington federal court's move comes as courts across the country are taking measures to deal with the spread of the virus, which the Centers for Disease Control and Prevention has said is likely on its way to becoming a global pandemic.

Also on Friday, the Central District of California released an announcement on its website asking people who are supposed to appear in court or who have been called for jury duty to stay home if they are coughing, sneezing or experiencing any flu-like symptoms.

The court will make "reasonable accommodations" and reschedule appearances and hearings as needed, according to the announcement.

The announcement from the Central District, which has courthouses in Los Angeles, Riverside and Santa Ana, also said the court is closely monitoring the national response to the virus and is following all of the CDC's safety guidelines.

No individual district judges in the Western District of Washington or Central District of California have issued their own standing orders pertaining to the coronavirus, according to representatives from those courts.

U.S. District Judge Rodney Gilstrap of the Eastern District of Texas issued such an order earlier this week. Judge Gilstrap ordered attorneys and parties to promptly notify opposing counsel if it is reasonably suspected — "while erring on the side of caution" — that a hearing, trial or disposition may expose an individual to the virus.

Correction: A prior version of this story misstated the planned length of the freeze. The error has been corrected.