Law360, New York (March 9, 2020, 11:10 AM EDT) -- The Southern District of New York on Monday enacted new restrictions on who may enter the courts due to the coronavirus outbreak, barring entry to anyone who recently traveled to countries that are hardest hit by the virus or those who have come into contact with it. 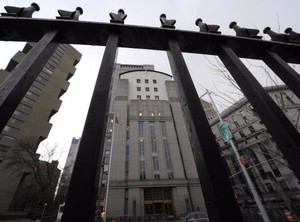 Monday's ban applies to anyone who has traveled to China, South Korea, Japan, Italy or Iran in the past 14 days, or has been around someone who traveled to one of the countries in the same period. (Getty)

In an order, Chief Judge Colleen McMahon said the ban applies to anyone who has traveled to China, South Korea, Japan, Italy or Iran in the past 14 days. Also banned are people who live with or have come into close contact with anyone who has been in one of those countries during that period; people who have been asked to self-quarantine; and those who have either been diagnosed with the disease — called COVID-19 — or come into contact with someone who has been diagnosed.

The order cited guidance by the U.S. Centers for Disease Control that the best way to avoid illness is by avoiding the virus altogether.

"Anyone attempting to enter in violation of these protocols will be denied entry by a court security officer," Judge McMahon wrote. She added that the restrictions would "remain in place temporarily until it is determined to be safe to remove them."

The new policy applies to courthouses for both the U.S. Court of Appeals for the Second Circuit as well as U.S. Bankruptcy Court in the district.

SDNY District Executive Edward A. Friedland told Law360 that the office had circulated its new policy nationally and that two other federal district courts had called for more information about the policy, though he declined to identify which courts.

"Whether or not other courts will adopt it, I don't know," he said.

"We have remote capabilities in many courthouses, but depending on how the situation continues to evolve, other than arraignments, matters could be adjourned," he added.

At least one trial was adjourned in the state court on Monday due to COVID-19 precautions, namely the opening day of trial in Lehman Brothers v. AG Financial, a long-simmering contract lawsuit over crisis-era credit derivatives, which was delayed following news on Sunday that an unnamed attorney at Quinn Emanuel Urquhart & Sullivan LLP tested positive for the virus.

Out west, the U.S. Court of Appeals for the Ninth Circuit announced on its website that it "has cancelled its en banc hearings and all non-case related meetings scheduled for the week of March 9th."

While all oral arguments are set to continue in that circuit, "counsel who wish to appear remotely for any hearing may file a motion in that case for such relief," the court noted on the website.