Law360, New York (March 13, 2020, 5:40 PM EDT) -- New York state courts and the Southern District of New York on Friday suspended all new trials amid the COVID-19 pandemic, while a security guard in the Manhattan U.S. Attorney's Office tested positive for the virus. 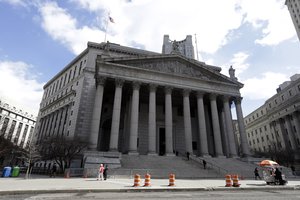 All new trials in the New York state court system will be suspended starting Monday, as the state faces more than 400 coronavirus cases. (AP)

In a sign that the outbreak in New York has begun affecting a basic function of the courts, Chief Administrative Judge Lawrence K. Marks announced in a letter that starting Monday the statewide court system will suspend new civil and criminal jury trials, halt jury selection and no longer empanel grand juries "absent exceptional circumstances," although current grand juries will remain on duty along with some trial jurors.

Judge Marks said the actions were taken "as part of our ongoing efforts to reduce courthouse traffic to combat the spread of the coronavirus and protect the health and safety of our workforce, and consistent with recent action by Gov. Cuomo to limit large public gatherings."

Bench trials are set to continue, and other appearances will proceed with various exceptions laid out in the two-page letter. The state court's sweeping decision vastly expanded on previous restrictions that barred anyone who had been exposed to the virus or had traveled to a short list of affected countries.

Chief U.S. District Judge Colleen McMahon followed suit on Friday, indefinitely postponing all civil and criminal trials in the Southern District that were scheduled to begin before April 27.

Ongoing trials in the Southern District are unaffected and existing grand juries will continue, the judge said. Criminal defendants who wish to opt-out of the order by invoking their right to a speedy trial can apply to the presiding judge, but the chief judge will have to sign off on any decision to move forward.

Hearings, conferences and bench trials may continue at each judge's discretion, Chief Judge McMahon said, but they are "strongly encouraged to conduct court proceedings by telephone or video conferencing where practicable."

Criminal matters, such as arraignments, detention hearings or applications for search warrants, will continue as usual, according to the order. Bankruptcy court, probation, pretrial services, the clerk's office and the office of the district executive all remain open.

Separately, a guard at the U.S. Attorney's Office for the Southern District of New York tested positive for the coronavirus in the first such diagnosis for the office. Building employees were notified on Friday.

A spokesman for the federal prosecutors' office told Law360 that the guard had only worked "a few shifts" in recent weeks and that the entrance and lobby area were cleaned extensively. Staffers at the U.S. Attorney's Office were given the option of working from home, he added.

By Friday afternoon, the federal district court had banned anyone coming from a list of 33 countries, including many in Europe, in the past 14 days in an expansion of its previous restrictions issued earlier this week.

The virus has spurred dramatic actions in recent days with the city and state declaring emergencies and prohibiting gathering of 500 people or more, while slashing legal occupancy limits in public establishments by half in an effort to promote social distancing and stem the rising number of diagnoses.

As of Sunday afternoon, New York state had 729 diagnosed cases of the virus and New York City had 329. Westchester County, with 196 cases, was the center of the outbreak in the state, after a lawyer was the first there testing positive for the new coronavirus.

Law360 is tracking court closures across the country here.

Update: This article has been updated with new information about the courts' restrictions and statewide diagnoses.