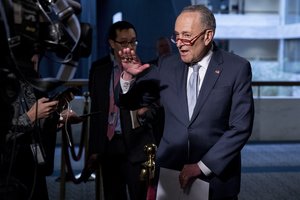 Sen. John Cornyn, R-Texas, said the wish list of requests has shrunk as Treasury Secretary Steven Mnuchin met with Senate Minority Leader Chuck Schumer, D-N.Y. Absent an agreement that satisfies all senators and can pass with unanimous consent, the next vote on the legislation will likely take place Wednesday, lawmakers said.

Senate Democrats said they oppose the bill because it would provide the U.S. Department of the Treasury with an unaccountable $500 billion "slush fund" to address the impact of COVID-19, the illness caused by the coronavirus.

"I don't think our Republicans colleagues would want to give any administration a blank check to spend $500 billion however they want without clear safeguards or some process for accountability," Sen. Chris Van Hollen, D-Md., said.

Negotiations also continued over the limits to expanding unemployment benefits for workers whose jobs are furloughed or lost because of government actions to stem the spread of the virus. Lawmakers were getting close on issues such as unemployment insurance for gig workers, Van Hollen said, and also on providing payroll funding for small businesses facing lost sales.

During a press briefing at the White House, Vice President Mike Pence said he and President Donald Trump have encouraged governors to pressure their members of Congress to quickly move the bill and put $3,000 into the hands of a family of four. Pence also touted payroll subsidies to keep people on the payroll even if forced to stay home, as well as unemployment insurance and assistance to industries.

Speaking with Neil Cavuto on Fox News Channel, Senate Finance Committee Chairman Chuck Grassley, R-Iowa, disputed accusations by Democrats that the legislation would bail out corporations at the expense of working Americans. He maintained that unless the legislation helps airlines survive, then travel will come to a halt and thousands of people would lose their jobs.

Meanwhile, House Speaker Nancy Pelosi, D-Calif., released a coronavirus relief bill that reflects the Democratic Party's priorities, called the Take Responsibility for Workers and Families Act. In remarks to reporters, Pelosi criticized the GOP efforts in the Senate. She said the COVID-19 relief bill should be "worker-oriented, not give away the store to those who might do buybacks, dividends, CEO pay and not honor the responsibilities they have to their workers."

Under the bill, obtained by Law360, the IRS would receive $602 million to postpone the April 15 tax-filing date to July 15 and implement tax credits. The bill would provide premium tax credits for uninsured Americans to enroll in the Affordable Care Act marketplace to receive coverage for the COVID-19 treatment.

The House bill would also provide that businesses could carry back losses from 2018, 2019 and 2020 for up to five years. Also, net operating losses would temporarily not be subject to a taxable income limitation, meaning they could fully offset income. The bill would provide a refundable tax credit against the employer's share of Social Security taxes for employers who retain their workers.

Update: This story has been updated with the release of the Democrats' bill.