Law360, London (March 24, 2020, 2:59 PM GMT) -- Britain's Supreme Court conducted a case entirely by video link for the first time in history on Tuesday after deciding to close its building to the public, becoming the latest court to impose restrictions because of the coronavirus pandemic. 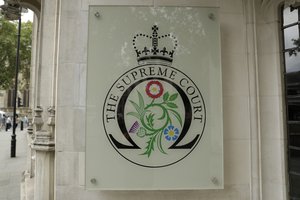 The U.K.'s highest appeals court will switch to video conferencing and hand down judgments remotely after the nationwide lockdown over the coronavirus. (AP)

The U.K.'s highest appeals court said it would switch to video conferencing and hand down judgments remotely in an update following the nationwide lockdown imposed by Prime Minister Boris Johnson on Monday night in response to the escalating COVID-19 crisis.

"Cases and judgment hand-downs will continue via a web-based video conferencing system until further notice. The parties, their legal teams, counsel and each of the justices will be located in different places," the Supreme Court said in a statement.

The first hearing to use the technology is the case of Fowler v. Commissioners for HM Revenue and Customs. The dispute is over whether Britain or South Africa is entitled to tax income derived from a South African resident's diving work in the waters of the U.K. continental shelf.

The first judgment to take place behind close doors will be handed down on Wednesday in the case of Elgizouli v Secretary of State for the Home Department. That case concerns the fate of El Shafee Elsheikh, who is accused of being a member of a group of terrorists operating in Syria who kidnapped and murdered several Western hostages, including a U.S. citizen.

His mother is fighting to have her son tried in the U.K. rather than the U.S., where he could face the death penalty.

HM Courts and Tribunals Service, an executive agency of the Ministry of Justice, also said that, from Tuesday, magistrates' courts would hear only urgent cases. It has told parties involved in all other cases not to attend court.

An update released by the Bar Council, which represents barristers in England and Wales, said urgent cases include all overnight custody cases from police stations, including arrest warrants and breach of bail cases, and extradition hearings.

A bail application for WikiLeaks founder Julian Assange is due to be heard at Westminster Magistrates Court on Wednesday on the grounds that he is vulnerable to the coronavirus outbreak in the London prison where he is on remand.

"The prime minister's message yesterday evening was clear that everyone must stay at home to inhibit all contact and stall the spread of COVID-19," Amanda Pinto QC, chairwoman of the Bar Council, said. "The situation for magistrates' courts is unclear, but we suggest you do not attend in person until the guidance is clear."

On Monday, the head of the judiciary said all jury trials in England and Wales would be temporarily suspended until they can be held safely, building on an earlier decision to only permit jury trials that lasted up to three days.

The Ministry of Justice had insisted last week that courts would be kept open despite the government advising citizens to work from home and avoid socializing to stem the spread of COVID-19 — particularly in London.

But, in guidance issued Thursday, civil and family court judges were told that the "default position"now is that hearings should be conducted with one or more participants attending remotely.

Robert Buckland, the secretary of state for justice, defended the judiciary's response to the coronavirus crisis as he appeared before Parliament's Justice Committee on Tuesday.

"We are having to respond at great pace to a fast-moving situation," he told the committee. "I do not think, with respect to people who have been commenting about this, that it is fair to judge us as harshly as some people are doing, bearing in mind the imperative of making sure we have a functioning justice system."

Buckland said the judiciary had to balance "trying to protect vulnerable people and save lives" at the same time as "making sure law and order and public protections are maintained" and that the courts are not overwhelmed by a backlog of cases.

"Later in the year we will be able to return with gusto to making sure we can list cases for trial and deal with what would be quite an alarming backlog if no work whatsoever was able to be done between now and then," he said.

Update: This story has been updated with commentary from the justice secretary.