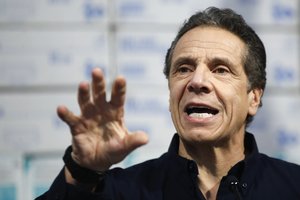 New York Gov. Andrew Cuomo said he wanted his administration to be able to adjust appropriations to match state revenues, which are expected to come in $10 billion to $15 billion below earlier projections. (AP)

Cuomo, a Democrat, said during a news conference that to deal with expected budget shortfalls caused by measures to stem the COVID-19 pandemic, he wanted his administration to have the power to adjust appropriations on an ongoing basis to match revenues. Cuomo said he didn't think the state Legislature would want to keep coming back to Albany to make changes and didn't know if it was responsible for lawmakers to return anyhow considering the COVID-19 pandemic.

In addition, Cuomo pushed back against some calls for a bare-bones budget that wouldn't include broader policy initiatives. He said the state budget should include such policy initiatives because he wasn't confident the Legislature would be able to act on any other initiatives this year because of the pandemic.

“I don't just want to do a budget. I want to do the policy initiatives we need to do because my expectation at this point is there's going to be a budget and nothing else,” Cuomo said.

But despite Cuomo's call to include major policy decisions in the state budget, details on those considerations were scarce on Thursday. Cuomo didn't specifically mention any tax policy he would or wouldn't consider, and his office didn't immediately respond to requests for comment on what tax policy measures he would prefer. Cuomo said last week he didn't want to increase taxes.

New York's new fiscal year begins on April 1, and some, like Senate Republican Leader John J. Flanagan, R-Smithtown, have called for a “streamlined budget” that keeps critical operations on track and deals with coronavirus issues, but leaves other policy issues for later.

Robert Mujica, Cuomo's budget director, said during the news conference that new estimates show the state is facing revenue forecasts that are $10 billion to $15 billion below projections from earlier this year. He said appropriations could be projected out on a quarterly or bimonthly basis and spending could be adjusted according to how revenues come in.

Cuomo's stance on the state budget came as he excoriated federal lawmakers for supporting a COVID-19 relief bill he said didn't provide New York with enough funds to deal with the revenue shortfalls associated with COVID-19 and actions the state and localities have taken to try to stem the pandemic. Cuomo's office has estimated New York would get about $3.1 billion from the federal government, although the state has a larger number of people infected by the virus than other states. A Cuomo spokesperson said on Wednesday that the $3.1 billion for New York, as a percentage of the state's total budget, was just 1.9%, while South Dakota, for example, would receive funding that's 17.9% of that state's budget.

The U.S. Senate approved the $2 trillion bill on Wednesday, and the House is expected to take up the bill on Friday.

The offices of Senate Majority Leader Andrea Stewart-Cousins, D-Yonkers, and Assembly Speaker Carl Heastie, D-Bronx, didn't respond to requests for comment Thursday. Stewart-Cousins, in a radio interview on Thursday morning, said she understood the need for “nimbleness” in order to react to ongoing situations, and said that's why the Legislature passed a bill earlier this month giving the governor additional powers during crisis like the pandemic. But she played down giving the governor unilateral power over the purse strings moving forward.

“I would never be in favor of giving wide latitude without involvement of the Legislature in most of these decisions,” Stewart-Cousins said.

Despite legislative leaders and the governor sharing little details on what tax policy may come out of the budget, others have weighed in. Michael Kink, executive director of the Strong Economy For All Coalition, an umbrella group that represents labor unions and education groups, panned Cuomo's call for cuts and instead said increased taxes should be considered.

“New York still has more billionaires and multimillionaires than anywhere else on the planet, and in this time of great need, we should be asking them to pay higher taxes to help all New Yorkers,” Kink said. “They need to get out of their Hamptons hideouts and emergency bunkers and do their fair share.”

Kink called for Cuomo and lawmakers to pass an “ultramillionaires” income tax, an emergency billionaire tax on unrealized capital gains and a tax on luxury second, third, fourth and fifth homes.

E.J. McMahon, research director for the fiscally conservative Empire Center for Public Policy, told Law360 the budget process in New York this year was even more cloaked in secrecy than usual, perhaps because those in Albany were hoping for a federal government bailout. But he opposed any new or increased taxes.

“There should not be any tax hike, and I resist any question proceeding from the assumption that there must be,” McMahon said. “What we need to see now is a more detailed financial plan detailing their actual expectations for tax revenues and a range of spending cuts to adjust to that.”

McMahon said that considering the federal bill passed last week, which he said addresses some of the state's previous budget shortfalls dealing with Medicaid, the state budget shortfall is closer to $3 billion to $5 billion.

Cuomo's budget also proposed to repeal a 1-cent-per-liter tax on liquor with less than 2% of alcohol by volume. Cuomo would also change the state's $420 million annual film production tax credit by reducing the credit rate for production and post-production from 30% to 25%, requiring a minimum of $1 million in spending in the New York City region, except for pilots, and disallowing variety shows to qualify for future credits. The credit would also be extended from 2024 to 2025.

While details on what would make it into a final budget deal remained opaque on Thursday, there were some signs that cannabis legalization might not make it into a budget deal by Tuesday. Justin Flagg, a spokesman for Sen. Liz Krueger, D-Manhattan, who is sponsoring cannabis taxation and legalization legislation that differs from Cuomo's proposal, shared a statement last week from Krueger that said while it was important to end cannabis prohibition as soon as possible, it was also important it be done the right way.

“If that cannot be achieved in the midst of a public health crisis, then we will all be better off waiting,” Krueger said. “There is no reason we cannot negotiate and pass a nation-leading legalization model when the crisis is over.”