By Pedram Sameni
Law360 is providing free access to its coronavirus coverage to make sure all members of the legal community have accurate information in this time of uncertainty and change. Use the form below to sign up for any of our weekly newsletters. Signing up for any of our section newsletters will opt you in to the weekly Coronavirus briefing.


Law360 (April 8, 2020, 1:23 PM EDT) -- Coronavirus and its global impact have affected almost every sector of the economy. With all of the job losses and the continued lockdown in more than 80% of U.S. cities, at this point, it is clear we are in one of the worst recessions in recent decades.

We decided to analyze the impact of coronavirus on the intellectual property sector, specifically patents, for the next few years. We hope our analysis enables the IP community, specifically patent firms and IP-intensive companies, to better prepare and plan for this uncertain period.

To begin, we divide the patent-related work into three main areas: patent prosecution, patent litigation and patent transactions. We plan to have separate studies to cover litigation and transactions, but, historically, litigation has been recession-proof. Companies use litigation as a tool to improve their bottom line during a recession.

On the other hand, transactions usually disappear quickly during recessions. This is not limited to patents alone. Usually, a recession affects all kinds of mergers and acquisitions deals, and they may come to a complete stop during uncertain times. Patents are no different. We recently reached out to some well-known nonpracticing entities to see how they anticipate the market reaction. Not surprisingly, they all confirmed that they've sidelined their ongoing negotiations and deals for the time being.

Prosecution, on the other hand, is different, as it is a long-term investment. Smart companies look at new patent applications as capital investment with a potential return beyond the one or two years of recession (for up to 20 years or the lifetime of the patent).

While the above statement is generally true, depending on many macroeconomic factors — such as market segments (e.g., life sciences vs. high-tech), driving forces behind the recession, response of local governments, etc. — companies may take different strategies to navigate through a recession.

To gain more insights, we are going to analyze the U.S. patent data during the last two recessions (the tech bubble of the early 2000s and the financial crisis of 2008). We will look at how everything played out during those downturns.

To build a strong foundation for this analysis, first, we need to gather some insights about the overall growth in application filing, comparison of applications of foreign-origin versus those of U.S. origin and activities of different technology centers during the last 20 plus years.

We will use our findings to draw some conclusions about the current uncertain environment coronavirus is causing and make some predictions about the direction in which we are heading, as well as consider best practices during this time.

Baseline Growth in U.S. Filings Over the Last Two Decades

However, the growth was not constant every year. We divided this period into two timelines: the first one between 1997 to 2010, which covers the last two recessions, and the second between 2011 to 2018.

The following chart shows the U.S. filings by year from 1997 to 2010. During this period, the U.S. application filings had a positive growth for every year except 2009. 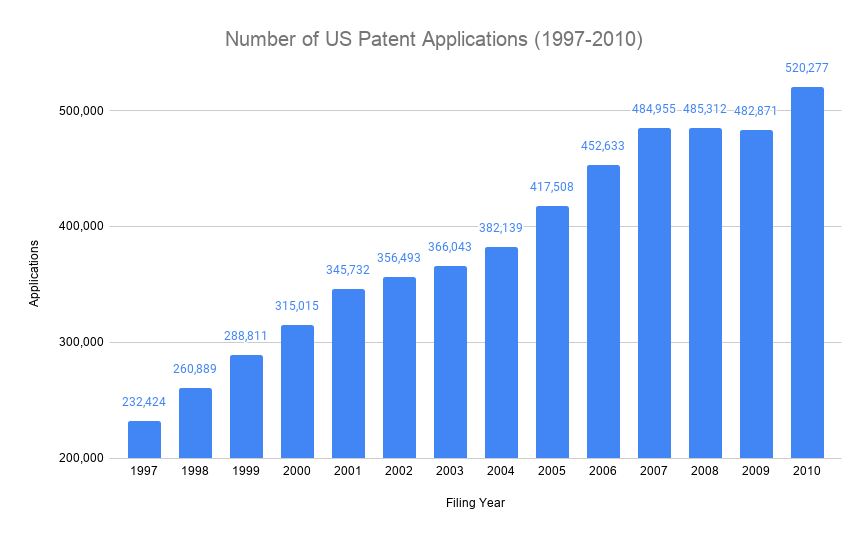 While studying increased foreign filings is interesting and shows that foreign companies' interest in protecting their U.S. market shares has been growing faster than U.S. companies, we are not going to further examine it at this time, as it is not relevant to the subject of this study. 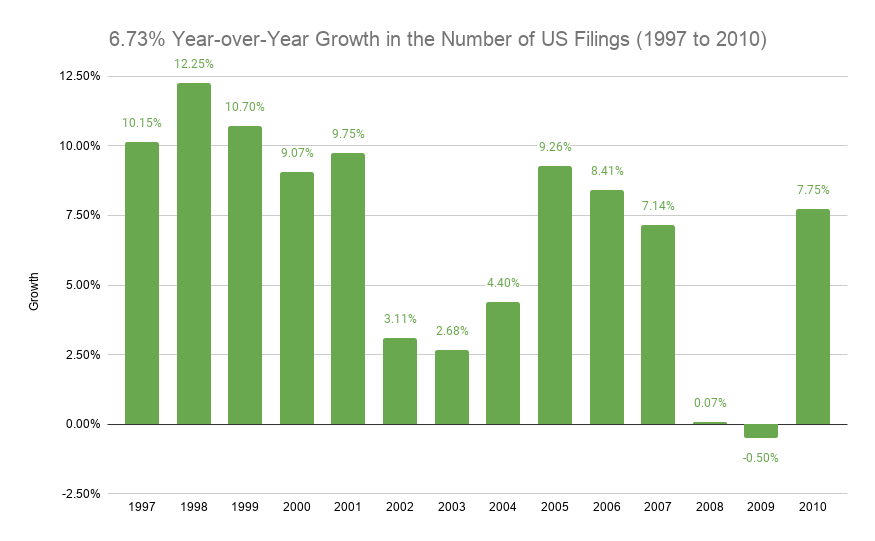 The second period is from 2011 to 2018. The following chart shows the filing activity for this period. 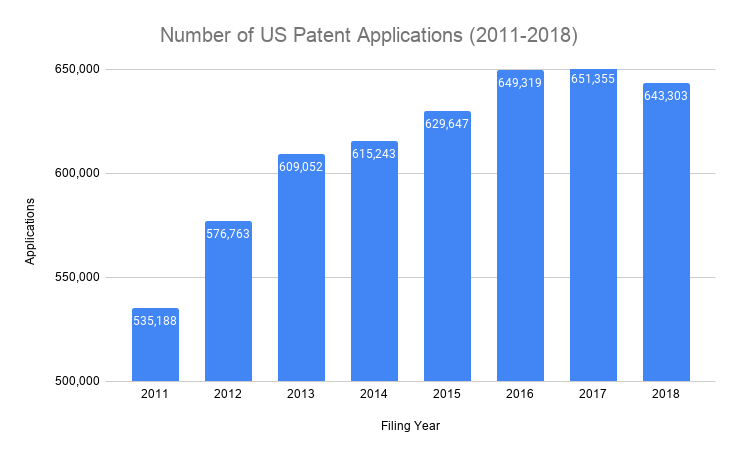 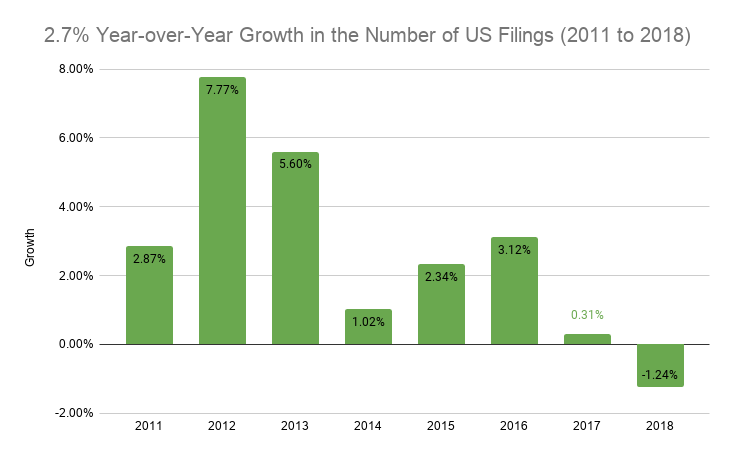 Looking at the growth period and comparing that with the stabilization period, we can see a sudden drop in average year-over-year growth. This drop may stem from different factors; it is difficult to attribute it to a single source. The several factors that we believe contributed to this sudden drop in growth include:

Impact of the Dotcom Crash on U.S. Filings

The tech bubble triggered the early 2000s recession. It officially started in March 2001 and ended after eight months in November 2001.[2] As shown in the first two charts, the U.S. filing growth dropped to 3.1% and 2.7% in the two years immediately following the recession.

While a portion of those abandoned applications may have been due to examiners' rejections, the big increase may have indicated a temporary shift in the corporate IP management strategy. Corporations decided to cut costs during the recession by dropping less essential applications.

Analyzing the technology centers and areas of filing during this period exposes another fact about this period: The decline was not consistent for all sectors. While almost all technology centers saw a sharp decline in their year-over-year growth in 2002, some technology centers, including 2100 (computer architecture) and 2600 (communications), had negative growth. These two areas were at the heart of tech bubbles, and companies in those sectors saw the greatest effect. 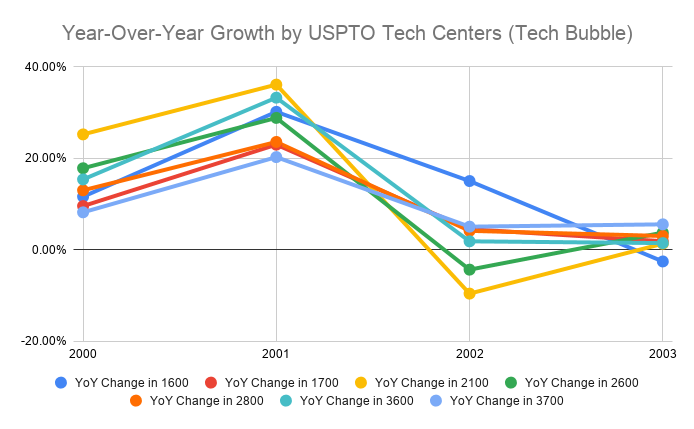 Two other observations we made during this recession were a slight rise in provisional applications and an abandonment of issued patents due to nonpayment of maintenance fees.

The first may show the desire of corporations to defer the filing of the utility applications before making a larger investment (postponing the cost).

And the second one indicates the tightening of budgets and careful review of patent values internally before making a decision to pay the renewal fees.

Impact of the Financial Crisis on U.S. Filings

The subprime mortgage crisis triggered the most recent recession, leading to the collapse of the housing bubble in the U.S. This recession, which was worse than the dotcom bubble and spread to many sectors, officially started in December 2007 and ended after 18 months in June 2009.[3] Examining the first two charts above, we see zero growth in 2008 and half a percent decline in 2009. 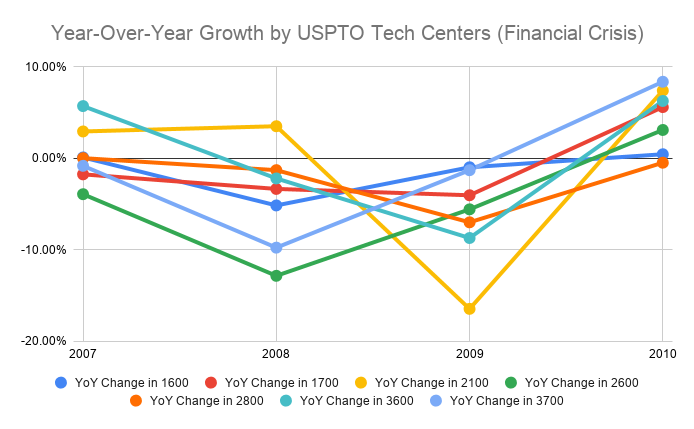 The recent filing trends, as well as the U.S. application filing fluctuations during the two most recent recessions (the tech bubble in the early 2000s and the financial crisis of 2008), helped us arrive at the following conclusions:

Corporations tried to postpone some decisions to reduce their spending in the short term as much as possible. This was partly accomplished using provisional applications whenever possible.

The number of abandoned applications rose significantly during both recessions, which indicated that corporations tried to cut costs through abandoning nonessential applications.

The number of expired patents because of nonpayment of renewal fees went up during both recessions.

The impact of coronavirus is global and is affecting almost all sectors of the economy worldwide. While some will feel the pain with a delay, there will be a small group, such as particular sections of health care and life sciences or e-commerce, that may even benefit directly.

Overall, we expect this recession to last longer and cut deeper than the two most recent recessions, and, during this downturn, the IP landscape may change, as a result of which, we would be facing a new norm.

Patent practitioners were already feeling some pressure, as growth slowed in recent years and as corporations attempted to reduce the prosecution cost as much as possible.

The recession will only accelerate the changes that were already happening. Therefore, we expect to see a larger decline in filing activity (i.e., 2% to 4%) in 2020 and 2021.

We believe corporations will give quality more weight than quantity. The internal corporate IP departments will need to adjust their operations to make smart decisions when they choose what to file or maintain. This requires further integration of analytics, as well as market and business intelligence in their day-to-day operations.

Analysis of the portfolio strength and weakness will help companies determine what to maintain, drop or license out in order to minimize their portfolio's cost while opportunistically licensing the unused IP.

In addition, regular performance review and cost comparison of the patent firms working for companies can help them create proper guidelines and manage their patent counsel more efficiently.

On the other hand, the need for patent firms to improve their efficiency is more important than ever. Cost control and using analytics and business intelligence can help firms achieve these goals while making them more fit to operate under the new environment imposed by corporations and ongoing recession.

As Bob Goff says: "Embrace uncertainty. Some of the most beautiful chapters in our lives won't have a title until much later."


Pedram Sameni is the CEO and founder of Patexia Inc.

[2] Wikipedia: List of recessions in the United States https://en.wikipedia.org/wiki/List_of_recessions_in_the_United_States