By Amy Lee Rosen
Law360 is providing free access to its coronavirus coverage to make sure all members of the legal community have accurate information in this time of uncertainty and change. Use the form below to sign up for any of our weekly newsletters. Signing up for any of our section newsletters will opt you in to the weekly Coronavirus briefing.


Law360 (April 13, 2020, 7:46 PM EDT) -- Although the IRS extended deadlines for the identification and purchase of properties in like-kind exchanges in response to the novel coronavirus pandemic, it is still unclear whether the deadlines are extended until July 15 or for an extra 120 days. 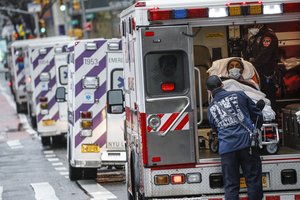 The spread of the novel coronavirus in the U.S. prompted the IRS to extend deadlines for identifying and buying properties in like-kind exchanges, but tax attorneys say it's unclear just what those extensions mean. (AP)

allows similar parcels of real estate to be swapped in a tax-deferred transaction in which no gain or loss is recognized. To qualify for the benefit, a taxpayer generally must identify similar property within 45 days of the sale of a property and purchase one of those identified properties within 180 days, according to the statute. The replacement property and relinquished property must be held for investment or productive use in a trade or business, so personal residences cannot be exchanged.

Many organizations, such as the National Association of Realtors, had called for the government to delay the 45- and 180-day like-kind exchange deadlines because the COVID-19 crisis had hindered showing real estate, and therefore identifying properties, and also delayed processing bank loans and closing transactions. Sticking to the original deadlines could result in many small and medium-size businesses as well as middle-class investors paying significant capital gains taxes if the 1031 transaction failed and a taxpayer had to recognize a taxable event, according to a letter written by NAR and 20 other real estate groups.

, including like-kind exchanges. Under the 2018 revenue procedure, if the president declares a federal disaster, then the IRS gains extra authority under IRC Section 7508A

to extend certain deadlines. President Donald Trump declared a national emergency on March 13, and the IRS has relied on Section 7508A to extend other deadlines in a flurry of previously issued notices.

But it is not clear how Notice 2020-23 affects Section 1031 exchanges, since the notice says only that "specified time-sensitive actions," such as any exchange transactions under Section 1031 that have a deadline between April 1 and July 15, can be postponed until July 15. Meanwhile, Revenue Procedure 2018-58 specifically extends both the 45- and 180-day like-kind exchange deadlines by a minimum of 120 days, which could place those deadlines after July 15, according to Todd D. Keator, the tax practice leader at Thompson & Knight LLP.

"While the industry is thankful for the notice, it would have been more beneficial if the IRS had issued guidance expressly including 1031," Keator said.

The IRS did not respond to questions from Law360.

Keator told Law360 that according to his interpretation, Notice 2020-23 does not invoke the extra 120 days under the 2018 revenue procedure. The reason, he said, is that the IRS is instead using its ability to provide tax deadline relief as allowed under Section 7508A to allow any deadline that falls between April 1 and July 15, 2020, to be postponed until July 15, he said.

If the correct interpretation is that July 15 is the deadline for all transactions that had due dates between April 1 and mid-July, it will provide different levels of relief to different taxpayers depending on when their deadlines fall. For example, a taxpayer whose 180-day exchange deadline is up on July 1 would get a 15-day extension, while one whose due date is in April or May would get a longer extension.

More recently the IRS invoked Revenue Procedure 2018-58 to provide tax relief for victims of earthquakes in Puerto Rico in January, and the agency used the same procedure to relax like-kind exchange deadlines for Tennessee victims of severe storms, tornadoes and flooding in March.

Notice 2020-23, then, "is less helpful than simply invoking the relief under … Revenue Procedure 2018-58, which would have given all affected taxpayers at least 120 days of extension," he said.

The IRS could theoretically still use Revenue Procedure 2018-58 to extend Section 1031 deadlines nationwide and apply them retroactively to the beginning of the crisis, so that those who may have just missed a 45- or 180-day deadline would receive relief, Keator said.

The April 1-July 15 period in the notice also may not reach all those who have been affected by the pandemic. For example, the California governor imposed a shelter-in-place order on March 19, so if someone sold a property in the state on Sept. 30, that seller might not have been able to purchase an already identified property by March 28, the 180-day deadline, according to Mary Cunningham, president and CEO of Chicago Deferred Exchange Co.

Under the shelter-in-place order, a potential buyer cannot schedule inspections to identify replacement property or get loans from banks, Cunningham said. Missing the deadline could potentially result in a large tax hit, she said.

The taxes in California would require paying federal capital gains tax at a maximum of 20%, state tax at a rate of 13.3% if in the highest income bracket, and federal net investment income tax of 3.8%, known as the Medicare tax, as required under Internal Revenue Code Section 1411

"So all in you're looking at a pretty substantial tax bill, not to mention the loss of income from their rental property that they don't own any longer," she said. "So it's not a good result."

Extending all Section 1031 deadlines just to July 15 could lead to some odd results and may cause problems down the road when taxpayers try to close on their identified properties, according to Brad Borden, a law professor at Brooklyn Law School.

So if a 45-day identification period ended on April 1, the transaction date would have begun around Feb. 16, which means the deadline for the identification period would be pushed back until July 15, Borden said. However, in that case the 180-day period would end after July 15 and that deadline would remain the same. That means the identified property could be chosen as late as July 15 but would still have to be purchased by Aug. 14, he said.

"If you identify by July 15, then you only have one month to pick a property and close on it, and that doesn't make sense [because] in a lot of geographic areas it's hard to close within 30 days of identifying," Borden told Law360.

Since the IRS has been generous with deadline extensions in other areas, it's hard to imagine that the agency intended the relief for like-kind exchanges to be relatively restrictive, Borden said.

Another interpretation of Notice 2020-23 is that it extends both the 45- and 180-day deadlines for another 120 days, according to Libin Zhang, a partner at Fried Frank Harris Shriver & Jacobson LLP.

Because the IRS has issued guidance for a federally declared disaster, one could argue that triggers the 120-day postponement rules under Section 17, Zhang said. One could also interpret the revenue procedure as providing relief beginning on March 13, the day Trump declared a federal disaster, rather than April 1, he said.

"People are debating this, and it would be good for the IRS to actually confirm," he said. "People just want certainty."