Law360 (April 10, 2020, 9:52 PM EDT) -- As anxiety over the coronavirus pandemic has caused the stock market to tumble, and efforts to contain it mean shuttering businesses and halting swaths of the economy, professional liability experts who remember the wave of legal malpractice allegations post-2008 are bracing for a new surge in such claims.

"It is clear that the number and severity of claims against lawyers increased after the economic downturn of the [Great] Recession," said Roger Warin, a partner at Steptoe & Johnson LLP. "Having lived through 2008, I would expect something like that will happen here."

Even small, one-off jobs could unravel into malpractice claims from distressed clients, just as they did then.

Take the example of Dechert LLP.

The firm's attorneys were not the ones who swindled real estate investors out of $400 million with false promissory notes in the years leading up to the Great Recession of 2008. And yet, when Marc Dreier's Ponzi scheme collapsed, the global law firm was sued.

Dechert took the job, and found that the deal's terms were fair and binding. But once it came to light that the signatures on the paperwork were forged by Dreier, Fortress sued Dechert for legal malpractice. Eventually, an appellate court sided with Dechert, finding in a 2011 decision that Fortress was not Dechert's client and that nothing suggested the law firm "was a knowing participant in the fraud."

But Dechert was hardly the only law firm blamed for losses in the wake of the Great Recession.

As the economy tanked, lawyers began filing more insurance claims, according to an American Bar Association survey of the largest legal malpractice carriers. The total number of insurance claims for the five practice areas most vulnerable to client litigation — personal injury, real estate, family, bankruptcy and estate law — nearly doubled in the four years after 2005, hitting 9,509 claims in 2009.

Expect another wave of legal malpractice claims in the wake of the coronavirus-fueled economic slump, as both individual clients who've been laid off and corporations that are hit potentially turn on their attorneys, according to Jonathan Bruno, a partner at Rivkin Radler LLP.

"They may be disgruntled, not necessarily because of the lawyer's wrongdoing, but because of the situation," he said. "I do think there are going to be people who will view this as an opportunity to make claims and try to collect some money, unfortunately."

But how and when that will shake out remains unclear.

Malpractice claims go up when the economy tanks, but the reaction is often delayed, according to an analysis by Law360 comparing 12 years of American Bar Association malpractice insurance data to historical S&P 500 annual average returns. 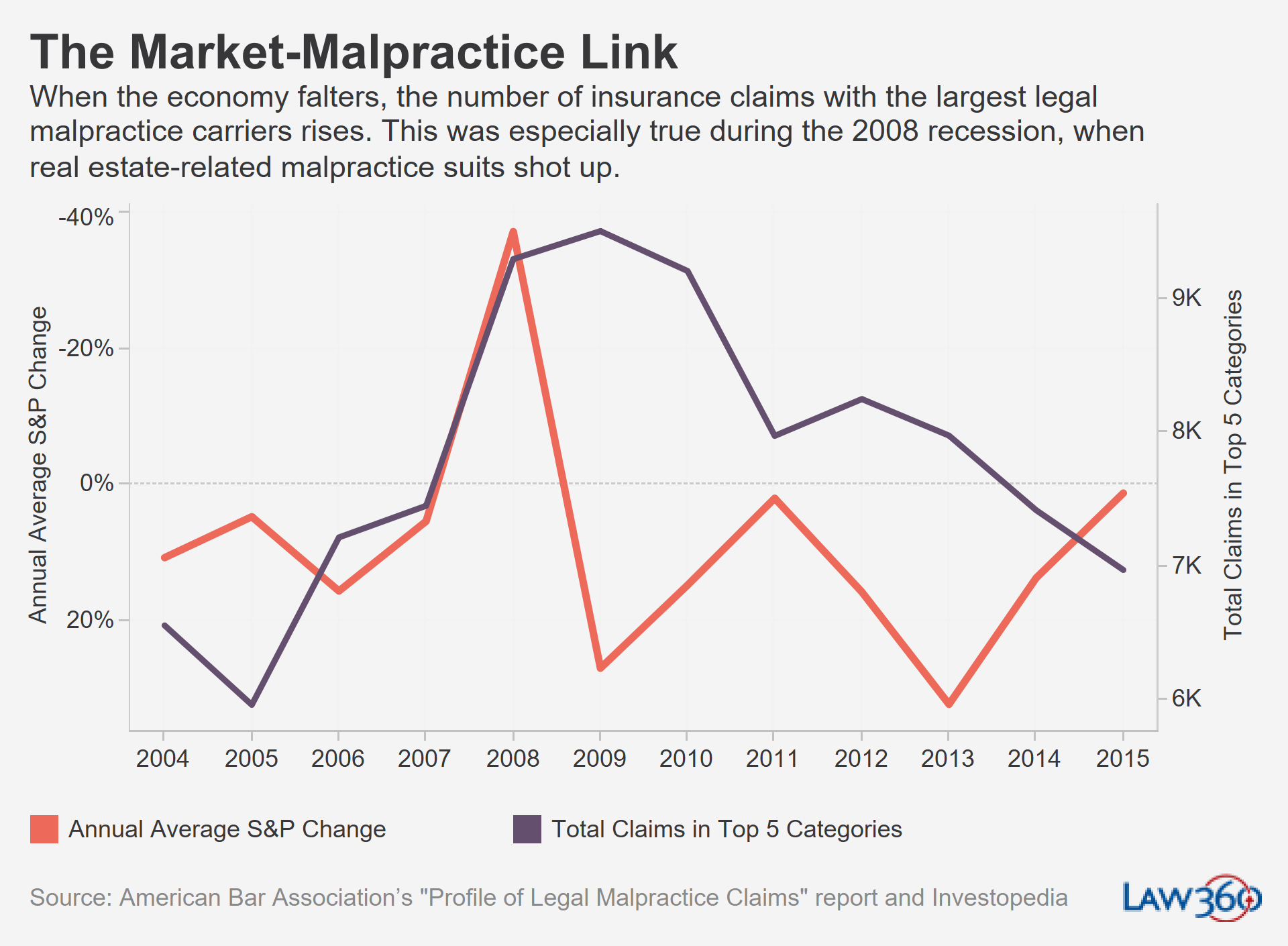 
While the stock market hit a low in 2008, the number of claims filed against attorneys in the five hardest-hit practice areas reached their peak a year later. Markets fell again in 2011 — a reaction to the European debt crisis and a downgrade in the United States' credit rating — and malpractice claims saw an uptick the following year.

That trend is likely to continue, given the triage that goes on during an economic crisis, says Nicholas Cutaia, a litigator with professional liability expertise at Goulston & Storrs.

"It takes some time to unwind alleged negligence. A plaintiff with a malpractice claim has a statute of limitations they're working under, and they're typically two to three years long," he said. "People are focused on much more pressing matters than suing their lawyers right now."

But that lag could be stretched out this time around, because the pandemic has also stymied litigation. Many courts have delayed proceedings and prohibited new filings for non-essential matters in an effort to keep dockets clear and prevent the need for in-person appearances. That could prolong the onset of a malpractice backlash, Bruno said, because "everything's going to be pushed back."

It also presents a double-edged sword for attorneys. In many cases, the statute of limitations are tolled and filing deadlines delayed. That means, at least for now, that attorneys are less likely to miss a deadline — the error most frequently alleged in malpractice claims, according to the ABA's most recent report analyzing claims from 2012 to 2015.

But with different extensions coming out of each court, attorneys have a lot to keep track of, especially as some firms furlough or fire support staff like calendar clerks and paralegals who ordinarily monitor deadlines, according to Bruno.

"From a risk management point of view, attorneys need to still be cognizant of executive orders from their governors and the different courts where they practice," he said. "Everyone's working remotely, and communications might not be as good as they were before the pandemic arose. So, there's still risk there."

Another potential pitfall for attorneys is evaluating their prior work, said Cutaia, especially when assessing whether a contract includes pandemics among the "acts of God" that free parties of their obligations.

"Attorneys have to make sure they don't have a conflict of interest in interpreting a clause in a way the client thinks is negligent," he said.

During the 2008 recession, allegations of bad advice soared to the top of the list of error allegations against attorneys, joining long-time favorites, like failures to file on time, send along documents and prepare.

That could happen in the wake of the coronavirus as well, says Warin, and BigLaw firms could be particularly vulnerable.

"It's more likely to hit firms in commercial markets, firms that are representing major businesses," he said. "And if those businesses fail, lawyers may have often been involved in business advice that had legal implications. And so if the lawyer failed to warn [a client] off of a risky deal, you could easily see a claim being made."

Sometimes, malpractice claims reflect the cause of the economic downturn, as they did during the Great Recession, which was triggered by a crisis in the mortgage industry. In 2006, real estate lawyers filed the most malpractice claims, surpassing personal injury plaintiffs' attorneys — the top claim generator since at least 1983, when the ABA started collecting data. By 2008, malpractice claims related to real estate had tripled over the course of three years, reaching 3,190 claims.

The coronavirus-fueled economic standstill has led to significant business interruptions, and could result in a surge of contract and insurance-related malpractice claims, says Cutaia.

Contracts dictate almost every aspect of business — employees, supply chains, investments and insurance — and the fate of some companies could rest on whether their contracts have teeth during a pandemic.

"You're going to be seeing folks who believe they had insurance or contractual protection against this [and] find out they don't," he said.

And just as the 2008 recession revealed many Ponzi schemes, the current drop could unveil another wave of long-standing fraud.

Warin says that as the market drops, people may want to cash out their holdings, and that's how many schemes are uncovered. Law firms associated with fraudulent deals could be vulnerable.

Those schemes can also lead to an uptick in bankruptcies, Warin said, and that means even if attorneys weren't in on the fraud, they can be vulnerable to negligence lawsuits years later.

"Lawyers are frequently viewed as having deep pockets, and the trustee has no loyalty to the lawyer," he said. "Once the Ponzi scheme is outed, the bankruptcy trustee is looking for anybody who had any relationship with the fraudsters. So you see law firms and accounting firms get dragged in, and claims are brought against them."

What can a firm do to protect itself? Bruno says it's important attorneys track filing deadlines, and he also recommends attorneys communicate with clients and document that communication.

"If clients are not kept in the loop, they're more likely to sue if they don't get the result they expected," he said.