Law360 (May 14, 2020, 7:25 PM EDT) -- California's governor on Thursday confirmed a grim fiscal picture for the nation's most populous state, saying the abrupt recession brought on by the novel coronavirus will lead to a $41.2 billion drop in tax revenue. 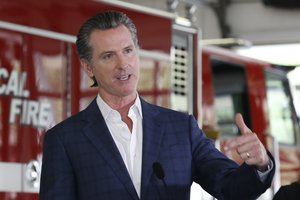 Giving California's traditional May budget update, Gov. Gavin Newsom, a Democrat, offered a far different scenario from an initial projection he made in January, when the state enjoyed an estimated $5.6 billion surplus and a record $21 billion in reserve.

In early March, revenues for California were running $1.35 billion above the January estimate. Then came the coronavirus and a precipitous economic collapse, as Newsom's Department of Finance first revealed May 7, and the governor formally outlined Thursday. Before transfers are taken into account, the drop in tax revenue would be more than $43 billion.

He said the budget would come down to about $203 billion from the $222 billion he estimated in January.

"Not surprisingly, our sales and use projections are taking the biggest hit," Newsom said. "People are tightening their belts."

These measures include suspending net operating losses for 2020, 2021 and 2022 for medium and large businesses, limiting incentives that offset more than $5 million in tax liability for the same three years and delaying changes in the way the state collects tax revenue on cannabis.

Newsom's plan for a new tax on vaping, at $2 per 40 milligrams of nicotine in the product, would also stay and is estimated to raise about $33 million in 2020-21 that would be deposited in a special fund.

Otherwise, the state would bring out various tools, in addition to using reserves, to close the budget gap.

"There's no printing press here in the state of California," Newsom said, referring to the fact that states, unlike the federal government, must balance their budgets.

California would take advantage of the rainy-day fund it built, drawing down more than $8 billion for the next fiscal year. It would get rid of more than $8 billion in expansions and one-time expenditures, borrow and defer more than $10 billion and make up the rest in cuts, unless additional federal aid comes through.

To that end, Newsom implored Congress and President Donald Trump to enact a House bill, the HEROES Act, which would provide state and local governments with $900 billion, but Republican senators have expressed reluctance to pass additional coronavirus relief legislation.

"To the federal government: We need you," Newsom said. "These cuts can be negated; they can be dismissed with your support. The HEROES Act is the best approach."