3 Ways State Audits Are Adapting To The COVID-19 Pandemic


Law360 (June 1, 2020, 8:06 PM EDT) -- As the COVID-19 pandemic sweeps the world, state tax agencies must continue to find ways to perform audits, including remote operations and the adding of more flexibility to the process. 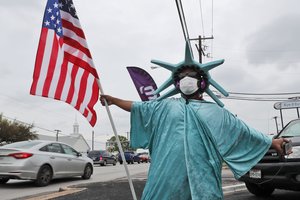 In April, Richard Pruitt drummed up business for a Liberty Tax office in Dallas. Facing restrictions from the COVID-19 pandemic, state tax agencies have had to think creatively about performing audits and accommodating taxpayers. (AP)

The global economy has ground to a halt because of lockdowns to prevent the spread of the novel coronavirus, which causes COVID-19, a respiratory disease. State tax agencies are scrambling to adapt to a world where in-person contact and operations are not an option. Agencies have had to come up with creative ways to perform core functions, such as remote audits, to keep work flowing and accommodate taxpayers.

While all state revenue departments have scrapped face-to-face interaction, other changes have been less uniform, with varying ad hoc approaches to reviewing and offering extensions, penalty and interest waivers, and other relief. Many states are not initiating new audits for now, and some, such as Maryland, have moved to pause even existing matters.

But as states adapt to the current crisis, they are also making sure that these controversies and the potential revenue that may come through resolving them do not fall through the cracks. States such as California have said that if extensions are necessary, they will ask taxpayers to sign waivers allowing them and will temporarily allow those signatures to be electronic. New York is also allowing digital signatures, as is Massachusetts, as long as a taxpayer submits documentation that the signature is valid.

Scott Peterson, of the compliance firm Avalara, said it is his experience that states are generally willing to accept electronic signatures for various audit documents, although they may still require penned signatures for powers of attorney.

Ultimately, the goal of the agencies is to be as flexible as possible for taxpayers and employees, according to 31 departments contacted by Law360 over two months. This is not the time to be adversarial, they said.

"The Arizona Department of Revenue strongly favors working with customers rather than taking enforcement actions," Ed Greenberg, a spokesman for the department, told Law360. "This approach is more cost-efficient, serves state and municipal interests, and benefits the taxpayer."

Here, Law360 presents three ways state agencies are handling audits in the middle of a pandemic. 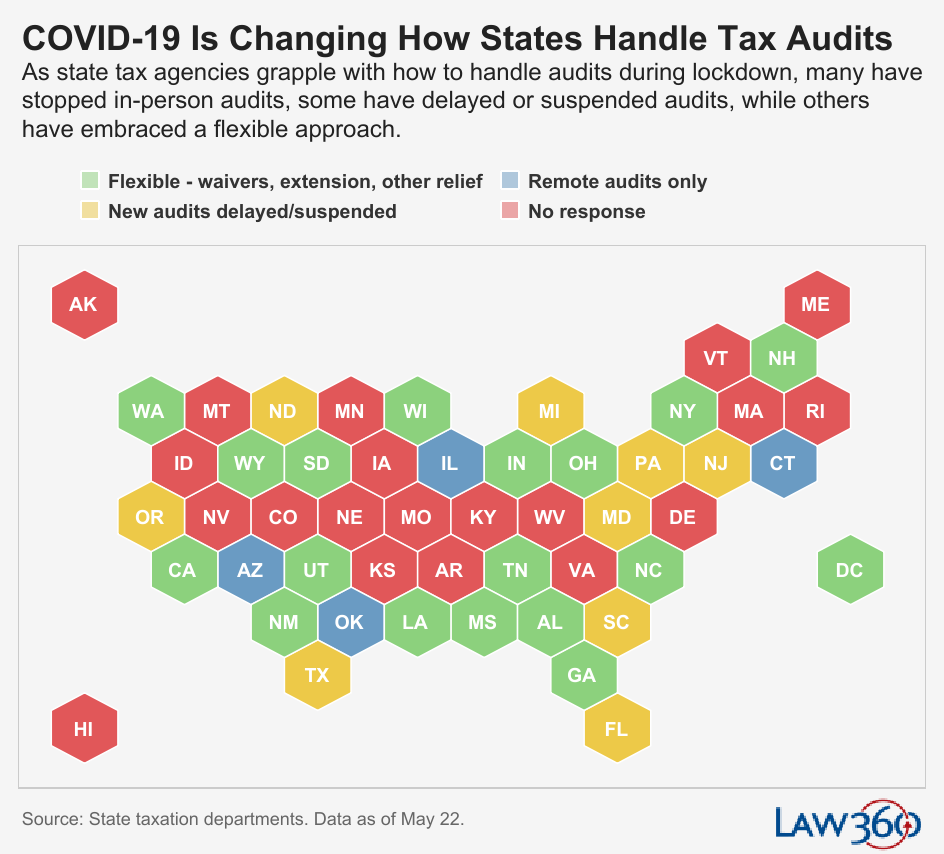 Like most tax professionals, tax department staff members are generally working from home; departments said on-site work is not happening. That is a shift from prior practice, but in the electronic age, departments have a strong base from which to continue. They have been doing a lot of the work remotely for some time, they said, although methods may vary by state.

Representatives of revenue departments said that generally, any function of the audit process that was conducted in person is being done remotely for now. Meetings may have switched to video calls, and other usual methods of communication, such as phone and email, are being used more widely.

Chris Smith, a spokesman for the California Franchise Tax Board, which handles income taxes in the state, said the FTB is communicating now through methods that include secure email, secure web internet file transfer, audio conference and videoconference.

"During this pandemic, these tools have been very efficient and effective in assisting our customers, especially in the absence of in-person meetings," Smith told Law360.

Some state tax departments, including California's and New York's, have also expressly said they would accept electronic signatures for documents and agreements, which may be used to extend the statute of limitations on audits. Others, such as the Washington state department, said they were "encouraging the use of electronic records."

Illinois provides an example of how remote audits can work. The state has a secure channel for exchange of electronic documents and correspondence, which it calls "the virtual audit room."

Sam Salustro, a spokesman for the Illinois Department of Revenue, told Law360 the approach had been working well for the department, which even before the pandemic was increasingly employing virtual methods to be more efficient and cut down on costs.

A corporate taxpayer can also be the one hosting the data room, noted David Blum, deputy chair of the tax practice group of Akerman LLP.

"Oftentimes you have a director of tax instructing the IT people to provide a data dump in a secure website, a secure link," Blum said. "And then the auditor uploads the link."

If Texas taxpayers find that such methods don't suit their needs for a particular matter, then the state, with its audit field offices temporarily closed, can grant extensions to begin field work later. Otherwise, work proceeds on existing matters, through electronic document exchange, and new matters began May 18 in some cases, said Kevin Lyons, a spokesman for the Office of the Comptroller of Public Accounts.

Things have been different for everyone, but the tax agency and taxpayers are adapting, Lyons said. He said auditors are going to taxpayer locations, if need be, to pick up records as long as they do not have to stay overnight or travel by air.

"Overall, we are still getting the job done with the vast majority of audit staff continuing to telework, and we continue to work with taxpayers regarding the flexibility and timing of the ongoing and new audits," Lyons said.

Work is also continuing for some taxpayers who are before the State Office of Administrative Hearings, Lyons said, because most of those hearings are conducted via written record. Those records are still being submitted and proposals for decision issued, he said. Another option is a hearing held by phone.

"Some taxpayers are choosing that rather than wait until oral hearings resume," Lyons said.

Practitioners who spoke to Law360 said they had noticed a definite change since the beginning of the pandemic, when things seemed frozen for a period of weeks.

"I've seen, in the last couple of weeks, renewed outreach. Some of the audits and negotiations, on matters and some litigation, have resumed," said Zach Gladney of Alston & Bird LLP, speaking of state tax departments generally. "It took maybe a month for them to readjust and get all the technology up and running."

Tax departments have come up with a variety of ways to do things differently to help address taxpayer needs, representatives told Law360.

For example, in Washington, audits of businesses with less than $5 million in gross income have been delayed at least through the beginning of June, according to the Department of Revenue's website. The department was given authority, via a proclamation from Gov. Jay Inslee, a Democrat, to waive or suspend statutes that might prevent it from offering timely assistance to taxpayers amid the pandemic. That proclamation was extended at least through the end of May.

Some states said they would waive penalties and interest based on certain conditions at this time. For example, Mississippi is among states that will agree to waive penalties and interest during the pandemic if taxpayers pay the tax due and settle audits without appeal, according to a statement from the Department of Revenue. It is also extending deadlines for production of records.

Florida will also consider waiving penalties and interest "based on reasonable cause," Bethany Webster, a spokeswoman for the state Department of Revenue, told Law360.

In Oklahoma, the state paused current audits and will not open new ones for certain businesses that it deemed hardest hit. Those included hotels, restaurants, bars and small, locally owned businesses that had to close because of state orders, Paula Ross, spokeswoman for the Oklahoma Tax Commission, told Law360.

"The idea is simple: We are making the decision not to impose financial hardship on these business types at this time," Ross said.

Blum, at Akerman, said he and his clients felt that as well. He said he had noted, for example, states' being more willing to approve requests for abatement of penalties.

"One thing I'm finding is an improvement in overall tone," Blum said. "Everyone seems to be more cordial and patient with each other."

In an attempt to get through a backlog of existing audits and to avoid putting additional pressure on taxpayers and their own staffs, many states are not conducting new audits amid the pandemic. New Jersey is among states that said it will not initiate new desk audits or field audits for now.

The state said it is accepting both written and electronic correspondence and working with taxpayers to reschedule any necessary field work. New Jersey also passed legislation on April 14 to extend the time frame for the Division of Taxation to make an assessment.

In Michigan, the compliance bureau "will generally not start" new field, office and correspondence examinations, Ron Leix, a spokesman for the Michigan Department of Treasury, told Law360. However, he said the department realizes there are some taxpayers who want to begin the process, and it is working to accommodate them.

Maryland has a contingency plan for taxpayers who are affected by the state's policy of suspending new audits and requesting extension agreements for audits in progress.

If a taxpayer does not want to sign such an agreement, the state will issue an estimated assessment based on the information it already has, and the assessment will be held in abeyance until 30 days after the state of emergency in Maryland has been lifted, said Alan Brody, a spokesman for the state comptroller, Peter Franchot.

Shail Shah, a state tax partner with Reed Smith LLP, said pausing audits offers both positives and negatives for his clients. Extensions were particularly welcome at the beginning of the pandemic.

"It was nice because people were trying to get their lives together, and figure out, OK, how are we going to proceed?" Shah said.

At the same time, he said, it is concerning for clients to have matters that may already be a year or two old continuing to linger.

"It's another layer of uncertainty," Shah said.