COVID-19 May Usher In Digital Taxes Despite US Tariff Threat


Law360 (June 3, 2020, 8:29 PM EDT) -- As digital taxes gain momentum around the world, the U.S. is preparing to levy more tariffs in retaliation — but many wonder whether the administration is prepared to escalate trade wars in a global economy hobbled by the COVID-19 pandemic. 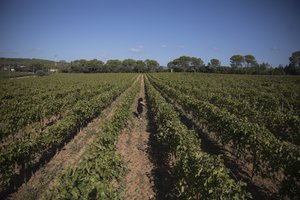 A vineyard in Provence, France. The U.S. held off enacting tariffs on wine and other French products in retaliation for France's digital services tax, but the administration now plans to investigate more countries' online levies. (AP)

The Office of the U.S. Trade Representative announced Tuesday it would investigate several more countries that have enacted or are considering taxes aimed at online or technology companies, measures that U.S. officials have long claimed disproportionately target American corporations. The investigations follow an earlier threat from the White House to enact tariffs against France over its 3% digital services tax if the countries can't reach an agreement through the Organization for Economic Cooperation and Development by the end of the year.

Hopes that the countries of the world can work out a deal that avoids singling out digital transactions seem to be dwindling. With citizens around the world trapped in their homes and reliant on the internet for basic needs, the focus on the tech giants and how much they pay in taxes has only increased. Some form of digital taxation may be inevitable, and many experts disagree on how much power the U.S. has to prevent it.

"We are all aware that the winners of this crisis will be the digital giants," French Finance Minister Bruno Le Maire said Wednesday during a Web livecast with the European Leadership Network, a London-based policy research group. "Nobody could understand that the winners of the crisis could avoid a fair taxation in the countries in which they are making profits."

Tech companies, because of their very nature, have long been at the center of debates on tax avoidance. Online commerce, only a few decades old, often falls outside the rules of the much older bilateral treaties that form the foundations of the international tax system. As a practical matter, many countries cannot collect taxes from a company without a physical presence within their borders. And companies in the technology sector are likelier to rely on intellectual property — which can be more easily moved to low-tax jurisdictions — in their business models.

During the last decade, many countries, as well as the European Union, looked into more aggressive measures to tax the digital giants. With the consensus on the international system apparently breaking down, in 2017 the OECD embarked on a project to fine-tune the global norms and address what it called the "tax challenges from digitalization of the economy."

By 2019 it appeared that all sides, including the U.S., were nearing an agreement on a new, broader principle that would allow countries some taxing rights on companies that sell or take advantage of their markets, even if they aren't physically present. But in December the U.S. balked and said it would oppose the proposal unless it could be used as an optional alternative to the existing tax system.

In the meantime, the U.S. looked at potential tariffs against French products such as wine and makeup to retaliate against France's 3% tax on revenue from certain online activities. The two countries reached a detente to hold off until 2021 while the OECD tries to complete its work. The U.K. also enacted a digital services tax, but it's not set to begin collection until next year as well.

But despite U.S. opposition, the idea took hold and spread worldwide. According to a recent report by the Tax Foundation, a conservative-leaning economic research group, 22 countries had either enacted or proposed some form of the tax as of last month.

Leaders around the world may be wondering just how far President Donald Trump, who has raged against France's digital services taxes on Twitter, would be willing to go to oppose them.

"I believe the EU still thinks this is a bluff, and the U.S. won't start a trade war over such relatively small amounts of tax," Dan Neidle, a partner at Clifford Chance in London, wrote to Law360. "I'm not sure that's right!"

The Office of the U.S. Trade Representative and the White House did not respond to requests for comment.

Additional tariffs — on top of those the Trump administration has already imposed on Europe and China on other matters — could further damage a global economy that has already plunged into a recession amid the global outbreak of the novel coronavirus, which causes COVID-19, a respiratory disease.

"It's hard to know whether countries will take tariffs as a credible threat amidst a pandemic, with national economies facing negative GDP growth," said Brian Jenn, a partner at McDermott Will & Emery LLP in Chicago, referring to gross domestic product. "Of course, since nobody has a clear idea of what the president might do, they would do well to not discount the prospect of tariffs entirely."

Itai Grinberg, a tax professor at Georgetown University Law Center who agrees with the U.S. view that the digital taxes are discriminatory, said the spillover consequences for a trade war in this environment could be substantial.

"Post-COVID, I think that a tit-for-tat, with tech on one side and luxury goods on the other as the global economy comes back, is quite dangerous," he said.

As more countries enact digital taxes, the OECD's project has also seemed to shift toward a more digital-specific proposal. Even before the pandemic struck, the organization's most recent document segregated the potential taxpayers between "consumer-facing businesses" and "automated digital services." The latter group expanded the scope of the tax to include cloud-based computing and other digital business-to-business transactions.

"What seems for sure is that digital is still the focus, not to say the target," Pascal Saint-Amans, the OECD's deputy director for tax policy, said May 21, speaking at a webinar hosted by the University of North Carolina Tax Center and the Tax Policy Center. "Having something tangible on digital will be highly expected."

He added that while the U.S. opposes "ring-fencing" digital companies, in the view of others, "the digital economy has ring-fenced itself" as street shops and restaurants close while online companies thrive.

Grinberg said: "It is unsurprising that in the present environment, when many consumer-facing businesses are doing quite badly and tech is relatively unaffected, the OECD finds itself contemplating the idea of a digital-only solution. I think that the difficult question that U.S. businesses face is how to confront this proposal."

The OECD's previous proposals could have captured a large portion of the world's multinational companies, a notion that might have been acceptable in thriving times but seems more difficult in a recession. Officials had already struggled with how to consider unprofitable companies in the new system, a question that becomes much more pertinent in 2020 and beyond.

"There may be some wariness in designing something that could end up affecting a lot of companies that are already pretty hard-hit by the economic effects of this time," said Lilian Faulhaber, a professor of tax at Georgetown Law.

The most recent U.S. announcement on trade investigations, targeting nine nations and the European Union, demonstrates how far the digital services tax concept has spread.

The U.S. plans to investigate not only laws modeled on France's tax but measures that try to capture digital revenue in other ways. For instance, it includes Indonesia, which recently passed a so-called electronic transactions tax ensuring that the country's 10% value-added tax applies to digital sales.

While the idea had previously been popular with wealthier European countries — with large populations of consumers — it is also being adopted by nations in the developing world.

Kenya is considering a 1.5% tax on gross revenue from digital marketplaces, while Nigeria has proposed new nexus rules that would require remote digital businesses to pay taxes in Nigeria.

Neither country was included in the U.S. announcement.