Law360 (June 4, 2020, 10:23 PM EDT) -- The director of the Centers for Disease Control and Prevention on Thursday warned of "serious problems" with lax social distancing, predicted a one-two punch of seasonal flu and COVID-19, and discussed new regulatory duties tied to the pandemic's toll on African Americans and Native Americans.

Robert R. Redfield, the CDC's leader since 2018, made the comments during a 2.5-hour hearing at the House Appropriations Committee's health panel. Redfield testified in a sparsely attended room in the Longworth House Office Building — most lawmakers asked questions via videoconference — and he was the sole witness at the hearing, which focused on the Trump administration's ongoing response to COVID-19.

Democratic lawmakers at Thursday's hearing repeatedly displayed photographs of shoulder-to-shoulder crowds at bars in Lake of the Ozarks, Missouri, and areas near the SpaceX launch site in Cape Canaveral, Florida. Few people in the images appeared to have donned masks. 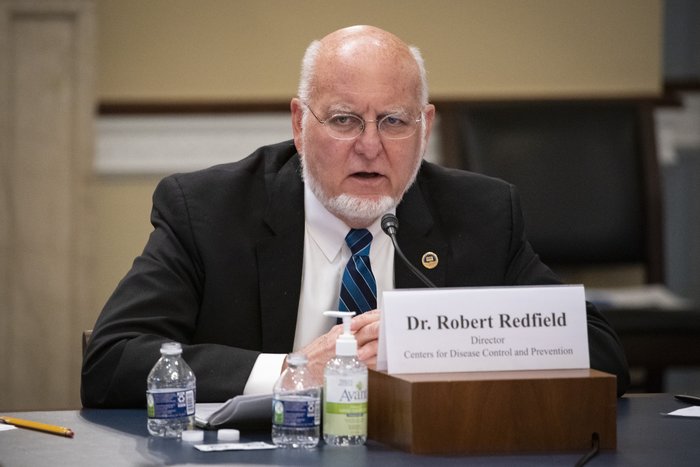 Dr. Robert Redfield, director of the Centers for Disease Control and Prevention, testifies at the House Appropriation Committee's health panel hearing about the COVID-19 response on Capitol Hill on Thursday. (Al Drago/Pool via AP)

He voiced similar worries when asked about scenes of Americans gathered at beaches and other outdoor spots without wearing masks, which the CDC recommends be used when six-feet social distancing is hard to consistently maintain.

President Donald Trump has avoided wearing a mask in public, while his Democratic challenger, former Vice President Joe Biden, has switched his Twitter and Facebook avatars to a photo of himself wearing a black mask and sunglasses during a Memorial Day event.

Redfield on Thursday came down firmly on the side of mask-wearing, stressing that it may prevent asymptomatic coronavirus carriers from unwittingly spreading the pathogen, which has killed about 108,000 Americans, according to Johns Hopkins University.

"We continue to see this as a critical public health tool," Redfield said. "We ask the American public to be vigilant about utilizing [masks], particularly as a major mechanism that we have to protect the vulnerable."

African Americans appear to be especially vulnerable, constituting about 13% of the U.S. population but roughly 23% of coronavirus fatalities, according to CDC data.

The disproportionate impact might be linked to limited health care access and preexisting conditions. It has been increasingly spotlighted amid Black Lives Matter protests, which have featured dense rallies that could spread COVID-19 and which were mentioned repeatedly at Thursday's hearing.

In one notable exchange, Rep. Mark Pocan, D-Wis., asked whether the use of tear gas to disperse protesters could worsen the pandemic by causing people to cough in close proximity to one another.

Redfield called that "an important point" and said he would discuss it with colleagues.

Rep. Tom Cole, R-Okla., the panel's ranking member, cited "the tragic death of Mr. [George] Floyd" in an encounter with four Minneapolis police officers — who have been criminally charged in Floyd's death — and "the health care disparities that this health care pandemic has shone a bright light on."

Redfield, who practiced medicine in Baltimore for more than 20 years, began his prepared testimony at Thursday's hearing with a poignant acknowledgement of the pandemic's disparate racial impacts.

"This nation is not only hearing a wake-up call; rather, we are hearing a clamoring for equity and healing — for a positive, permanent change to health and social disparities that persist in our nation," Redfield said Thursday.

Rep. Barbara Lee, D-Calif., an African American lawmaker, prodded Redfield on Thursday about the lack of data on where the black community is suffering most. In response, he noted that the U.S. Department of Health and Human Services on Thursday ordered every laboratory that screens for COVID-19 to report the race of tested patients.

"HHS and the entire Trump administration are deeply concerned that COVID-19 is having a disproportionate impact on certain demographics, including racial minorities and older Americans," HHS Secretary Alex Azar said in a Thursday statement.

HHS released a frequently asked questions document and guidance on the data collection requirements for labs. The guidance mandates the reporting of 18 data elements, including race and ethnicity; the latter element refers to whether someone is of Hispanic origin.

Some Native American tribes — including the Mississippi Band of Choctaw Indians and the Navajo Nation in the southwestern U.S. — have had extremely high infection rates. Congress has responded with special funding for the Indian Health Service as part of larger relief funds for health care providers.

Shoddy data collection likely weakened the U.S. coronavirus response. Notably, the CDC until recently did not publish up-to-date statistics on infections and deaths, forcing the public and the press to rely on academic institutions, especially Johns Hopkins.

Rep. John Moolenaar, R-Mich., on Thursday said it appears that "the CDC's response was hampered by an antiquated data system and a fractured public health reporting system across the United States."

Redfield on Thursday acknowledged the CDC's shortcomings but also indicated that problems run deeper, saying that some states "are still collecting data on pen and pencil."

"To get us over the goal line, it's going to require a substantial enhancement of that investment" in the CARES Act, Redfield said. "We're talking about building a comprehensive data system for the public health system of this nation. But when that is accomplished, it's going to be a gold mine."

Better data, he said, could help with a wide array of public health problems, including the opioid crisis.

Rep. Rosa DeLauro, D-Conn., the health panel's chairwoman, asked Redfield whether he stood by an April prediction that coronavirus infections — which are down significantly, but still growing by about 20,000 cases per day — could soar later this year in conjunction with the annual flu season, potentially overwhelming hospitals.

"Yeah, I think we're going to have a difficult time," the CDC boss replied.

To make things more manageable, Redfield said it's crucial that the U.S. increase its flu vaccination rate, which usually hovers around 40% for adults.

"The flu vaccine is one major way [Americans] can help the nation get through this fall," the director said.

Redfield added that it's his "expectation that we will have one or more [vaccines] available before the end of the year for COVID." But even if that happens, quickly producing and distributing enough vaccine doses to achieve herd immunity — typically pegged at about 70% of a population, so that a virus can't spread easily — will be a major challenge.

In the meantime, it remains to be seen whether coronavirus fatalities will keep dropping from their current level of slightly less than 1,000 per day. Although that's well below the peak of more than 2,000 deaths per day, the national decline is attributable in large part to dramatic improvements in New York, New Jersey, Connecticut, Massachusetts and Pennsylvania; some states are seeing a rise in deaths.