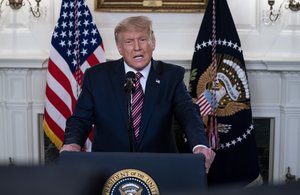 Trump announced the 20 additional judges that he would consider for a future opening on the Supreme Court during a press conference at the White House, a move aimed at energizing conservative voters by making the high court a top issue for the November election. The additions bring the total number of his potential Supreme Court picks to around 43.

"Apart from matters of war and peace, the nomination of a Supreme Court justice is the most important decision an American president can make," he said, describing a dystopian future of American law should Democratic nominee Joe Biden win and be able to choose his own nominees for the court.

"My original list of potential justices include many of our nation's brightest legal minds, such as Bill Pryor, Amy Coney Barrett and Thomas Hardiman, outstanding people. Like those distinguished individuals, the 20 additions I am announcing today would be jurists in the mold of Justices Antonin Scalia, Clarence Thomas and Samuel Alito."

"Every one of these individuals will ensure equal justice, equal treatment and equal rights for citizens of every race, color, religion and creed," Trump said. "Together we will defend our righteous heritage and preserve our magnificent American way of life."

The new additions include several young, conservative judges that Trump has recently appointed to the federal circuit bench. It is also possible that one of them will end up the nominee, as Trump's first and second choices for the Supreme Court, Neil Gorsuch and Brett Kavanaugh, were not among the original 10 people he named as possibilities, but added later.

Apart from some of the president's political allies, like the sitting Republican senators, the new names include Washington insiders who have long been linked with a potential Supreme Court nomination, such as Kirkland's Clement, a veteran Supreme Court lawyer who served as U.S. solicitor general under President George W. Bush. Ambassador Landau, a former clerk to Justice Scalia, also has substantial experience arguing at the high court as a former partner for Kirkland and Quinn Emanuel Urquhart & Sullivan LLP.

Meanwhile, Sen. Hawley of Missouri took to Twitter to distance himself from a Supreme Court nomination.

"[A]s I told the President, Missourians elected me to fight for them in the Senate, and I have no interest in the high court," he wrote.

Many of the names would spark fierce backlash from Democrats for their views on Roe v. Wade. Fifth Circuit Judge Ho has used his judicial opinions to rail against the "moral tragedy of abortion," while Judge Pitlyk represented anti-abortion groups in litigation prior to becoming a judge. Around the time of the president's announcement, Sen. Cotton, one of three Republican lawmakers added to the list, tweeted: "It's time for Roe v. Wade to go."

Indeed, the progressive group Demand Justice announced shortly after the president's remarks that it would launch a digital ad campaign in key states "highlighting the extreme views of several individuals on the list."

The recent federal appeals court judges added to the list include D.C. Circuit Judge Katsas, who was confirmed in November 2017 after a stint as White House deputy counsel in the Trump administration. The veteran Washington litigator replaced retired D.C. Circuit Judge Janice Rogers Brown on what's often called the country's second most powerful court. Katsas gained prominence arguing high-profile appeals as a partner at Jones Day, including the first challenge to the Affordable Care Act at the Supreme Court.

The list also includes Judge Lagoa, who became the first Hispanic woman confirmed to the Eleventh Circuit in November 2019 shortly after joining the Florida Supreme Court. Her confirmation to the appeals court flipped the court to a majority of Republican appointees. She previously worked as a commercial litigator for Greenberg Traurig LLP.

Perhaps the biggest omission from the list was D.C. Circuit Judge Neomi Rao, who has made headlines in recent months siding with Trump and his allies in a number of politically charged cases, from access to Trump's financial records to the federal prosecution against former national security adviser Michael Flynn.

Although they were not picked the last go-round, Judges Amy Coney Barrett and Amul Thapar remain front and center in conservative circles when discussing possible Supreme Court appointees.

Judge Barrett was confirmed to the Seventh Circuit in October 2017 after a contentious confirmation process in which Democrats seized on her strong Catholic faith to question whether she could serve as an impartial judge. In June 2018, Judge Barrett dissented when the Seventh Circuit refused to reconsider a decision striking down a so-called eugenics statute that made it illegal to perform an abortion because of the fetus' sex, race or disability.

She has also voted to limit the reach of the Age Discrimination in Employment Act and to uphold the Trump administration's "public charge" rule for immigrants that progressive groups have attacked as an illegal "wealth test." Should Trump win reelection, Judge Barrett is considered a potential front-runner to replace Justice Ruth Bader Ginsburg, the 87-year-old liberal icon who is fighting her fifth battle with cancer.

Judge Thapar was Trump's first appellate nominee to take the bench, after a 52-44 vote largely along party lines in May 2017. Republicans praised his nine-year tenure as a U.S. district judge in Kentucky.

deference, which instructs courts to defer to agency interpretations of ambiguous statutes.

Judge Thapar said Chevron is "not a free pass" and declined to give discretion to the Board of Immigration Appeals in a ruling in 2018.

He did the same in a dissenting opinion in August 2019 when the full circuit declined to rehear a challenge to IRS regulatory taxes. Nowadays, the IRS "exercises the power to tax and to destroy, in ways that the founders never would have envisioned," he said.

Biden has also tried to energize his base with plans for the Supreme Court, including a pledge to name the first African American woman to the nation's top bench. Biden has long tried to redeem his reputation among Black women after what many saw as his unfair treatment of law professor Anita Hill during the confirmation proceedings for Justice Clarence Thomas, whom she had accused of sexual harassment.

"We are putting together a list of a group of African American women who are qualified and have the experience to be on the court," Biden said in late June, though he added that he was still vetting the candidates.

Progressive activists are calling for not just racial diversity in Biden's judicial picks, but diversity in background as well. Groups like Demand Justice want to cut off BigLaw's pipeline to the federal bench, arguing that law firms' practice of defending corporations aligns with Republicans' conservative political interests.

Update: This story has been updated with additional information about the potential future nominees.