Law360 (September 26, 2020, 5:47 PM EDT) -- Seventh Circuit Judge Amy Coney Barrett, nominated by President Donald Trump on Saturday to sit on the U.S. Supreme Court, has written a limited number of tax decisions, but they demonstrate a faithful adherence to the Internal Revenue Code. 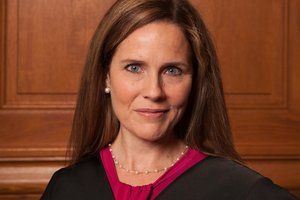 Seventh Circuit Judge Amy Coney Barrett, who made a name for herself as a professor at Notre Dame Law School, has expounded on the virtues of originalism and textualism, two conservative judicial doctrines.

Trump announced Judge Barrett as his third pick for the Supreme Court eight days after Justice Ruth Bader Ginsburg, whom Judge Barrett would replace, died of cancer complications. Judge Barrett, a Roman Catholic and prominent conservative legal scholar who taught at the University of Notre Dame, has published widely on topics of constitutional law, statutory interpretation and the role of precedent. She has also expounded on the virtues of originalism and textualism, conservative judicial doctrines championed by Justice Antonin Scalia, for whom she clerked.

VHC Inc. v. Commissioner was an appeal of a U.S. Tax Court decision from 2017 involving the IRS' disallowance of $92 million in bad-debt deductions claimed by a Wisconsin holding company for loans made to the founder's son. The Tax Court agreed with the IRS and found that the debt at issue was not bona fide and therefore didn't meet the statutory requirements in the code. VHC had argued that the bad-debt deductions were wrongly rejected because the company expected that the payments made to the son, Ron Van Den Heuvel, would eventually be repaid.

Last month Judge Barrett affirmed the Tax Court's ruling, agreeing with the lower court that the transactions between the company and Van Den Heuvel didn't amount to a true creditor-debtor relationship, making them ineligible for the deduction under Internal Revenue Code Section 166

. For example, the company consistently deferred the fixed maturity dates on the signed promissory notes for the loans, Judge Barrett said.

Samuel Brunson, a tax law professor at Loyola University Chicago School of Law, told Law360 that he thought Judge Barrett came to the right conclusion in the case and that her opinion did not really show any ideological leanings.

"She follows the text of the code and she follows precedent, so she does exactly what you'd hope a judge does," Brunson said. "What it suggests to me is that whatever her ideological ideas are, they don't bleed into the tax world. Because there's no real left-right question about whether a debt is a bona fide debt or not."

In this case, Judge Barrett found a group of Cook County, Illinois, landowners were allowed to proceed in federal court to challenge their property tax assessments since they had no avenue to dispute them at a state level. In her January 2020 decision, Judge Barrett reversed a lower court's finding that the group was barred by the Tax Injunction Act

from pursuing claims that it collectively overpaid more than $27 million in property taxes because of what the group alleges were discriminatory practices by Cook County.

The complaint asserted that from 2000 through 2008, the county assessor did not determine valuations of single-family residential, commercial and industrial properties at the percentages of market value required under the state property tax code and the Illinois Constitution. As a result, the group alleged, it collectively overpaid property taxes by more than $27.8 million on six properties, according to court documents.

The district court had found the group's lawsuit was barred by the TIA, which prohibits federal courts from interfering with the state collection of revenue if "a plain, speedy and efficient remedy may be had" in the state courts. However, a state law barred the property owners from challenging the methods employed by the Cook County assessor in Illinois courts, according to the opinion.

"We are left to conclude that this is the rare case in which taxpayers lack an adequate state court remedy," Judge Barrett said. "The Tax Injunction Act therefore does not bar the taxpayers' federal suit, so we reverse the district court's dismissal."

Edward Zelinsky, a professor of tax at the Yeshiva University Benjamin N. Cardozo School of Law, said Judge Barrett's opinion demonstrates a competent application of tax law and shows she can reach a consensus with her colleagues.

"I think in both [VHC and Moore] she gets to the right conclusion in a competent way where her identity as a Republican judge or Democratic judge doesn't get in the way," he said. "I think [Moore is] a very straightforward, persuasive professional decision where her ideological considerations played no role whatsoever."

Joseph Bishop-Henchman, a vice president at the National Taxpayers Union Foundation who is a tax and constitutional lawyer, said the TIA bar normally is extremely difficult to overcome, but Judge Barrett's conclusion was a strict and straightforward interpretation of the statute.

Bishop-Henchman also noted that the Cook County assessor asked the Supreme Court to review the case this month, and if it does take it up, Judge Barrett will likely have to recuse herself if she is confirmed.

In this Seventh Circuit case from 2019, accountant Philip G. Groves challenged the Internal Revenue Service's determination of a $2.3 million civil penalty against him for promoting abusive tax shelters in 2005. The dispute before the appeals court, however, mainly centered on whether a lower court correctly extended the 10-day window for filing an application with the Seventh Circuit after the initial application didn't arrive on time. A paralegal had mistyped an email address, and the error was not discovered until two days after the window closed.

Groves and the government had both argued that under a Seventh Circuit case from 1981, Nuclear Engineering Co. v. Scott,

the 10-day rule should be considered a claim processing rule and not a jurisdictional one, and therefore that the district court was allowed to reset the clock.

Judge Barrett and the other two judges on the panel, however, disagreed and overturned Nuclear Engineering. In her opinion, Judge Barrett cited a 2007 Supreme Court case, Bowles v. Russell

, in conjunction with a 2017 decision, Hamer v. Neighborhood House Services of Chicago

. Both cases found the 10-day deadline was not a claim processing rule. Under the Hamer decision, if a time prescription governs the transfer of a case from one Article III court to another, then it is jurisdictional, Judge Barrett said.

"In light of the court's precedent [in Hamer] we conclude that we were wrong to hold that district courts can extend the 10-day window by simply reentering or recertifying their orders," Judge Barrett wrote. "We therefore dismiss this appeal for lack of jurisdiction."

In the past the Seventh Circuit allowed parties to use the precedent set in Nuclear Engineering to recertify an order for interlocutory appeal when there was a mistake, Fischer said. But in Groves, Judge Barrett overruled that finding in light of Supreme Court precedent, he said.

"This was a strict statutory interpretation," he said. "Both parties and the district court wanted the Seventh Circuit to have jurisdiction; [however,] Barrett found that it did not."

The case is Philip G. Groves v. United States of America, case number 17-2937, in the U.S. Court of Appeals for the Seventh Circuit.