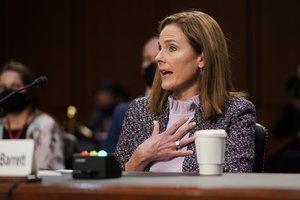 Judiciary Committee Chairman Lindsey Graham, R-S.C., opened the third day of hearings with Judge Barrett by arguing that, while she is indeed conservative and personally opposed to abortion, she would not rashly reject high court precedents even when she considers the original decision flawed.

, the 5-4 ruling in 2015 that legalized same-sex marriage nationwide. Two conservative justices last week called for reconsidering the decision because of "ruinous consequences" for religious freedom.

"Reaching a decision that the case was wrongly decided doesn't end the debate," Graham said. "There is a very rigorous process in place to overturn precedent."

"There is. Many factors, reliance being one," Judge Barrett agreed, referring to "reliance interests:" the principle that people should be able to rely on settled legal rules as they make personal and economic decisions. She agreed reliance interests would matter in cases involving same-sex marriage.

Graham also highlighted the ACA case pending at the high court. He asked Judge Barrett to explain the doctrine of severability, which could save the overall law even if a portion is found unconstitutional.

"The question is whether that one section can simply be rendered null and excised from the statute, severed, so that the rest of the law stands — or whether that provision is so central to the statute that … once it's pulled out, the whole house of card collapses," the nominee said. "And the presumption is always in favor of severability."

Graham jumped on that final phrase, effectively telling Republicans not to be surprised or dismayed if the law is not "terminated in the Supreme Court," as President Donald Trump tweeted the day after he nominated Judge Barrett last month.

"I want every conservative in the nation to listen to what she just said," Graham said. "The goal is to conserve the statute if that's possible. ... That's the law, folks."

While the Trump administration has joined GOP-led states asking the justices to strike down the entire health care law, Republicans on the Judiciary Committee have suggested the ACA is not actually at risk and argued Democrats are fearmongering.

"They're framing you as a real threat to health care coverage and especially protections for pre-existing conditions," Sen. Chuck Grassley, R-Iowa, told the judge. "This is all a charade."

The senator quoted a 2013 law review article in which then-Professor Barrett wrote that for a Supreme Court justice it is "more legitimate for her to enforce her best understanding of the Constitution rather than a precedent she thinks clearly in conflict with it."

The judge said she wanted to clear up the "misunderstanding" about that article and her view on respect for precedent, also known as stare decisis.

She paraphrased other lines from the article that urged restraint.

"A new majority cannot impose its vision only with votes," she told Feinstein. "It must be very sure that its interpretation of the Constitution is the right one and that reliance interests, et cetera, don't counsel in favor of its overruling. … Uncertainty in that regard counsels in favor of preserving the status quo."

However, she later noted precedents can still be overruled even if there are substantial reliance interests, pointing to segregation cases.

"Reliance interests are not dispositive," she said. "In Brown v. Board of Education

, clearly the South had an entire system of segregated schooling, so they had relied on Plessy v. Ferguson

Another Democrat, Rhode Island Sen. Sheldon Whitehouse, focused on a 1977 labor law precedent on union dues, arguing that conservative justices and legal funders mounted a decades-long campaign against the ruling, culminating in a 5-4 decision to overturn it in 2018. He pressed Judge Barrett on the idea of a campaign to roll back a precedent.

Throughout the hearing, Judge Barrett declined to answer questions on a wide variety of issues she said could come before the court, from False Claims Act cases and antitrust principles to humans' role in climate change and the morality of separating families to deter immigration.

, the 1965 precedent that found a right to privacy and decriminalized birth control. She said she couldn't imagine Griswold being overturned but wouldn't give her opinion because abortion cases build on it.

Coons charged that Judge Barrett seemed willing to upend precedents and launch "a new chapter of conservative judicial activism unlike anything we've seen in decades [that] could touch virtually every aspect of American life."

A GOP senator, Marsha Blackburn of Tennessee, responded that conservatives don't want any kind of judicial activism and accused liberals of projecting their own goals.

Sen. Richard Blumenthal, D-Conn., asked about gay-rights decisions protecting same-sex relationships and marriage that also draw on Griswold. Judge Barrett said that as a sitting circuit judge she cannot grade binding precedents, aside from a few unchallenged "super-precedents," including Brown v. Board.

"You're pushing me to try to violate the judicial canons of ethics and offer advisory opinions, and I won't do that," she said.

Blumenthal decried her refusal to address gay-rights cases: "I think a lot of Americans will be scared by the idea that people who want to simply marry or have a relationship with the person they love could find it criminalized, could find marriage equality cut back. I think it would be an America where I wouldn't want to live."

"Well, senator," the judge replied, "to suggest that that's the kind of America I want to create isn't based [on] in any facts in my record."

Wednesday marked the final day where Judge Barrett appeared before senators, for a total of about 25 hours this week.

On Thursday, several legal experts will testify about her record, including evaluators from the American Bar Association. The committee is expected to vote along party lines Oct. 22 to send her nomination to the Senate floor, where a final confirmation vote would come the week of Oct. 26.

Although Democrats protest plans for the fastest Supreme Court confirmation process since 1981, they acknowledge they can't keep Republicans from approving Judge Barrett before Election Day.

Update: This story has been updated with more details and with comments from Judge Barrett and members of the Judiciary Committee.