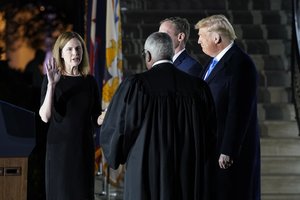 Senators approved Judge Barrett's elevation to the Supreme Court on a 52-48 vote, with one Republican joining all Democrats in opposition, making it the first high court confirmation without any support from the minority party since the Reconstruction era. Justice Clarence Thomas administered the first of Justice-designate Barrett's two oaths Monday night at the White House. Chief Justice John Roberts is set to administer the second oath Tuesday at the Supreme Court, which will formally install the newest justice.

"The confirmation process has made ever clearer to me one of the fundamental differences between the federal judiciary and the United States Senate, and perhaps the most acute is the role of policy preferences," Justice-designate Barrett told the crowd of Republican dignitaries. "A judge declares independence not only from Congress and the president but also from the private beliefs that might otherwise move her."

President Donald Trump said the Senate hearings showed the new justice's "deep knowledge, tremendous poise and towering intellect" and added that she "will make us all very, very proud."

Majority Leader Mitch McConnell, the Kentucky Republican who has made reshaping the courts the cornerstone of his legacy, praised the jurist as "one of the most qualified nominees for judicial service that we have seen in our lifetimes."

"Her intellectual brilliance is unquestioned. Her command of the law is remarkable. Her integrity is above reproach," McConnell said Sunday on the Senate floor. "But just as importantly, Judge Barrett has displayed zero willingness to impose personal views or clumsily craft new policy with her gavel. She has demonstrated the judicial humility, the neutrality and the commitment to our written Constitution that are essential for this office."

The final vote came after a rare overnight Senate session, with Democrats coming to the floor at all hours to denounce the process. Democrats were unified in opposition and joined by Sen. Susan Collins, R-Maine.

"I want to be very clear with the American people about what is going on here," Minority Leader Chuck Schumer, D-N.Y., said Sunday on the Senate floor. "The Republican Senate majority, America, is breaking faith with you — doing the exact opposite of what it promised just four years ago — to cement a majority on the Supreme Court that threatens your fundamental rights."

The outcome of Monday's vote was virtually guaranteed even before Trump tapped Judge Barrett exactly one month ago to replace Justice Ruth Bader Ginsburg, who died a week prior. Experts say the replacement of a leading liberal with a likely conservative will move the court to the right on issues ranging from abortion to administrative power.

Almost all Senate Republicans quickly backed McConnell's plan for speedy approval before Election Day on Nov. 3. Democrats uniformly denounced it as a hypocritical power grab after the GOP refused to consider President Barack Obama's pick in 2016; McConnell said he's consistently held that election-year vacancies should be filled if the same party controls the Senate and the White House.

In addition to the proximity to the election, Democrats also took issue with a confirmation process that moved quickly compared with others in recent decades.

The 30 days between Judge Barrett's nomination and confirmation made it the fastest approval for an associate Supreme Court justice since 1975, when senators unanimously sent Justice John Paul Stevens to the high court 19 days after his formal nomination. The median timeline for the eight sitting justices is 77.5 days, according to the Congressional Research Service.

Republicans have pointed out that, going back to 1789, the average confirmation took only 10 days. There have been several relatively speedy modern appointments, such as Justice Ginsburg's 42-day approval process in 1993. CRS starts the clock on the confirmation of Justice Roberts from when he was tapped as associate justice to replace Justice Sandra Day O'Connor, putting the length at 62 days, rather than the 23 from when he was renominated to fill the center seat after Chief Justice William Rehnquist died.

Democrats charged that Republicans acted quickly to confirm Judge Barrett not just to cement a conservative majority on the high court for years to come but also to immediately impact key cases this year.

Liberals portrayed the judge as a threat to the Affordable Care Act, whose constitutionality comes before the court again in a case set for argument Nov. 10. However, the overall law seems likely to survive this challenge, according to experts, Republican senators and Judge Barrett herself.

Democrats also pointed to Trump's comments that he wants a ninth justice seated because he expects the election to end up at the high court.

The party's senators told Judge Barrett at her confirmation hearings that they want her to recuse from any election litigation this year to avoid an appearance of partiality that could undermine public trust in the court. She vowed independence but said she could not make a recusal decision in advance because that constitutes a legal ruling.

However, at least one Democrat made a more direct attack on Judge Barrett during the final hours of debate on her nomination. Sen. Tom Udall of New Mexico charged Monday that Republicans "want their handpicked conservative judge to tip the scales for them."

"It has been shocking to watch as this president, aided and abetted by members of this very Senate, has been so overt about his desire to put a judge on the Supreme Court who will rule in his favor in any disputed election. That's a tactic of authoritarians, not a democracy," Udall said.

Republicans have rejected such language as desperate smears against an independent jurist.

"None of the baseless allegations that have been leveled against Judge Barrett have swayed any votes," Sen. Ben Sasse, R-Neb., said Monday. "Democrats didn't lay a glove on Judge Barrett in her confirmation hearings."

Vice President Mike Pence did not preside over Monday's vote as president of the Senate. He said Saturday he "wouldn't miss that vote for the world," but he did not attend after several staffers tested positive for the novel coronavirus.

Judge Barrett will join the high court in time to hear any election disputes, the ACA challenge and a slew of other major cases involving the special counsel's Russia probe, federal agencies' power and LGBTQ discrimination in foster care.

In keeping with McConnell's motto of "leave no vacancy behind," Trump last week announced his pick to replace Judge Barrett on the Seventh Circuit — former Winston & Strawn LLP partner Thomas L. Kirsch II, who currently serves as U.S. attorney for the Northern District of Indiana.

Update: This story has been updated with additional information and quotes from Monday's proceedings.