Law360 (October 29, 2020, 9:20 AM EDT) -- Tiffany & Co. and LVMH Moet Hennessy Louis Vuitton will lower the price tag of their merger from $16.2 billion to roughly $15.8 billion and have agreed to settle their legal dispute in Delaware, the companies said Thursday. 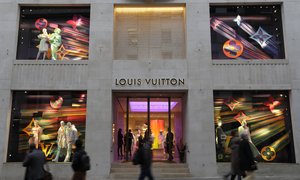 LVMH Moet Hennessy Louis Vuitton and Tiffany & Co. have revised the terms of their merger after LVMH tried to back out entirely, citing the material adverse effect of the coronavirus pandemic. But the companies have now agreed to settle their dispute and lower the price tag by about $400 million (AP Photo/Kirsty Wigglesworth)

Under the terms of the revised transaction, LVMH will acquire Tiffany for $131.5 per share, down from the original $135 per share, according to a statement, giving the deal a total value of about $15.8 billion. As part of the agreement, the companies will settle their pending litigation in the Delaware Chancery Court. Other "key terms" of the merger remain unchanged. The companies formally filed to voluntarily dismiss their Chancery dispute Thursday morning, and shortly thereafter Vice Chancellor Joseph R. Slights III granted the dismissal.

Bernard Arnault, president and CEO of LVMH, said in the press release that "this balanced agreement with Tiffany's board allows LVMH to work on the Tiffany acquisition with confidence and resume discussions with Tiffany's management on the integration details."

"We are as convinced as ever of the formidable potential of the Tiffany brand and believe that LVMH is the right home for Tiffany and its employees during this exciting next chapter," Arnault added.

The boards of directors for both companies have signaled their approval of the deal, and all required regulatory approvals have been obtained. It must still be approved by Tiffany shareholders and other customary closing conditions, and the companies expect to clinch the transaction early next year.

Roger N. Farah, chairman of the board of directors of Tiffany, said "we are very pleased to have reached an agreement with LVMH at an attractive price and to now be able to proceed with the merger."

"The board concluded it was in the best interests of all of our stakeholders to achieve certainty of closing," Farah noted.

The companies originally agreed to merge in November, but after the coronavirus pandemic hit LVMH tried to terminate the transaction. They had been going at it in court since September, when Tiffany lodged a complaint in the Delaware Court of Chancery seeking to compel LVMH to complete the deal it agreed to.

Later that month, LVMH filed a 241-page countersuit in Delaware Chancery Court, saying the deal should be nixed because, among other reasons, the effects of the pandemic constituted a material adverse effect, which is a common clause in merger agreements that let parties terminate a transaction under very narrowly defined circumstances.

On Sept 29, Tiffany bit back at LVMH's countersuit, saying that arguments made by the French luxury goods company were "baseless and misleading" and marked a "blatant attempt" to avoid paying the agreed-upon price.

Update: This story has been updated to include additional information.