By Katie Buehler
Law360 is providing free access to its coronavirus coverage to make sure all members of the legal community have accurate information in this time of uncertainty and change. Use the form below to sign up for any of our weekly newsletters. Signing up for any of our section newsletters will opt you in to the weekly Coronavirus briefing.


Law360 (November 2, 2020, 3:40 PM EST) -- The Fifth Circuit late Monday night denied a Republican bid to block drive-thru voting in Harris County, Texas, on Election Day, but the county had already decided only hours earlier to close nine of the 10 planned locations in response to the litigation. 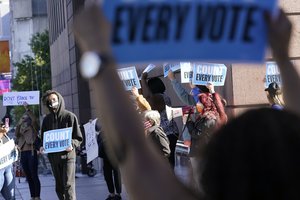 Demonstrators stand across the street from the federal courthouse in Houston before Monday's hearing on a GOP challenge to votes cast from cars during Texas' early voting period. (AP Photo/David J. Phillip)

Harris County Clerk Chris Hollins announced on Twitter around 10:15 p.m. that he would only allow drive-thru voting at one location, a garage at an indoor arena where the Houston Rockets play. That site meets the state Election Code's definition of a "building" where voting can take place on Election Day, Hollins said in a tweet.

Earlier Monday, U.S. District Judge Andrew S. Hanen held the Republicans, led by conservative activist Steven Hotze, lacked standing to challenge the county's drive-thru voting and refused to throw out 127,000 early voting ballots. He said the tents used at the drive-thru voting sites qualify as movable structures under Section 85.062(b) of the Texas election code, which allows their use during early voting. But he said the tents wouldn't qualify as a "building," where the Election Code requires voting to happen on Election Day.

Hollins said the decision to close the tent sites for Election Day was about protecting votes.

"My job is to protect the right to vote for all Harris County voters, and that includes those who are going to vote on Election Day," he said. "I cannot in good faith encourage voters to cast their votes in tents if that puts their votes at risk."

At the Fifth Circuit, the Republicans launched an emergency request at 9:30 p.m., hours after Judge Hanen's ruling, asking the court to block drive-thru voting on Election Day. They argued Hollins' allegedly illegal expansion of the Lone Star State's curbside voting in its most populous — and heavily Democratic — county would "dilute" other votes cast legally.

"When votes are cast illegally, in this case in overwhelmingly Democratic precincts, then the votes by other Harris County residents are improperly diluted and those law-abiding voters have standing to challenge the illegality," the Republicans said.

But the Fifth Circuit denied the request for an emergency injunction without explaining its decision.

Harris County, which includes Houston, has a population of about 4.7 million with 2.5 million registered voters, according to data from Texas' secretary of state. It has more than 800 walk-in voting sites, according to the clerk's office.

Hotze sued Hollins in federal court on Thursday, arguing he had circumvented the Texas Legislature and violated the equal protection clause of the 14th Amendment by allowing drive-thru voting. Republicans argued Hollins had illegally expanded curbside voting, which the Lone Star State restricts to voters who either are sick at the time of voting, have a disability that requires personal assistance or would be at great risk of injuring their health if they voted in-person.

Judge Hanen heard in-person arguments Monday morning in the drive-thru voting challenge that Democrats have criticized in court filings as an "eleventh-hour attempt to disrupt the election."

Though Judge Hanen ruled the Republicans don't have standing to challenge the legality of the cast votes, he said if he had decided the GOP had standing, he would have ruled to allow the early drive-thru votes to count, but would prohibit the practice on Election Day.

"I don't necessarily find the voting to be illegal as opposed to the voting place," he said, referring to the tents the drive-thru voters enter. "They voted according to the statute."

The judge said the GOP's challenge to the voting practice wasn't timely filed, since drive-thru voting has been going on for weeks and had been approved and announced for months before the Republicans filed suit last week.

During the three-hour hearing Monday, Judge Hanen heard testimony from several voters and their representatives about their drive-thru voting experiences. They told the judge that their IDs were checked and they filled their ballots out in the same manner as they would have if they had voted in-person.

"Everything is exactly the same as if you're walking into the building," said David L. Hobbs of Fleming Nolen & Jez LLP, representing himself and his wife, who was 35 weeks pregnant at the time they voted, as intervenors in the case. "The only difference is the building has a bigger entrance" for a car to fit in, he said.

Attorneys for other intervening voters argued there would be no way to notify in time the almost 127,000 voters who cast their ballots from cars that they must provide an in-person provisional ballot Tuesday if Judge Hanen decided to rule that way. One voter, who has cancer, will be in the hospital on Election Day, one attorney said.

Judge Hanen asked Jared Ryker Woodfill of Woodfill Law Firm PC, who is representing Hotze and the Republicans, why, when Texas allows counties to conduct elections differently as long as they follow the text of the law, drive-thru voting wouldn't simply be a different style of curbside voting.

Woodfill said the Texas Legislature hasn't recognized drive-thru voting, otherwise it would have placed limitations on the voting method, like prohibiting phone use while voting or limiting the number of people allowed in one car while voting.

"The Legislature never said drive-thru voting was OK," Woodfill said. "What they said was OK was curbside; what they did say was OK is vote-by-mail ... If folks don't like that process, they can lobby their senators. An individual county official cannot create a form of voting that is inconsistent with what the election code said."

Hotze and his co-plaintiffs have also challenged the policy in front of the Texas Supreme Court, which twice rejected the GOP's argument against counting the votes cast from cars. On Sunday, the state's solidly Republican high court unanimously rejected without an opinion similar arguments that Hollins was violating the U.S. Constitution.

The federal case has drawn seven amici briefs in favor of Hollins and Democrats, including a joint brief filed Monday by attorney Benjamin J. Ginsberg and former speaker of the Texas House of Representatives, Joseph R. Straus III, both Republicans. In their brief, Ginsberg and Straus urged Judge Hanen to ignore the GOP's argument, saying the party waited months to challenge a policy that tens of thousands of Houston-area residents have relied on to cast their vote.

"That plaintiffs cloak their eleventh-hour effort in principles of federalism and deference to the Texas Legislature is puzzling, not persuasive," the pair said in their brief. "Plaintiffs' motion rests on the remarkable contention that the elections clause's assignment of election administration authority to states, in fact, gives federal courts free reign to rewrite state election law for themselves where state officials have implemented the state election code in a manner that is consistent with its text."

The Lincoln Project, the Libertarian Party of Texas, the Texas Coalition of Black Democrats, a group of election law professors and a group of 12 cities and counties also filed amici briefs in support of Hollins and the Democrats, according to court records.

Texas Democratic Party Chair Gilberto Hinojosa said in a statement after the ruling that drive-thru voting shouldn't have been an issue in the first place.

"This lawsuit was shameful and it should have never seen the light of day," he said.

This is not the first time Hollins has been sued for his decisions on how to run Harris County's elections. In September, his plan to send unsolicited applications for mail-in ballots to every voter in the county was challenged by state officials. On Oct. 7, the Texas Supreme Court ruled Hollins' proposed plan was out of step with what clerks statewide were doing and "threatens to undermine" the uniform operation of election laws.

There has also been litigation in the Lone Star State over Gov. Greg Abbott's COVID-19-related safety orders, which provide a carve-out allowing voters and poll workers to forgo the statewide face covering mandate at polling places. The Fifth Circuit on Thursday stayed a Western District of Texas judge's order striking that exemption as void pending appeal.

Hotze and the Republicans are represented by Jared Ryker Woodfill of Woodfill Law Firm PC.

Update: This story has been updated throughout with information about drive-thru voting site closures, the Fifth Circuit appeal and comments from Chris Hollins, Richard Mithoff and Gilberto Hinojosa.

Correction: A previous version of this story misspelled David Hobbs' law firm. The error has been corrected.