Law360 (November 5, 2020, 10:05 PM EST) -- Tuesday's presidential election is one of the most contentious in recent memory and will likely be one of the most litigated. It may also have been the most closely monitored by legal volunteers.

Just as voter turnout reached a 120-year high, legal professionals also turned out in record numbers to safeguard the election, serving as poll workers, answering hotlines, guiding voters through the process and filing suits to ensure ballot access. The U.S. nonpartisan voter protection apparatus is fairly new. The 2000 presidential election spurred a mobilization of voting rights advocates, lawyers and civil rights organizations who have monitored votes ever since — and never more than this year.

The Lawyers' Committee for Civil Rights Under Law said it had 42,000 legal volunteers for its Election Protection program this cycle, up from 5,000 in preceding years. 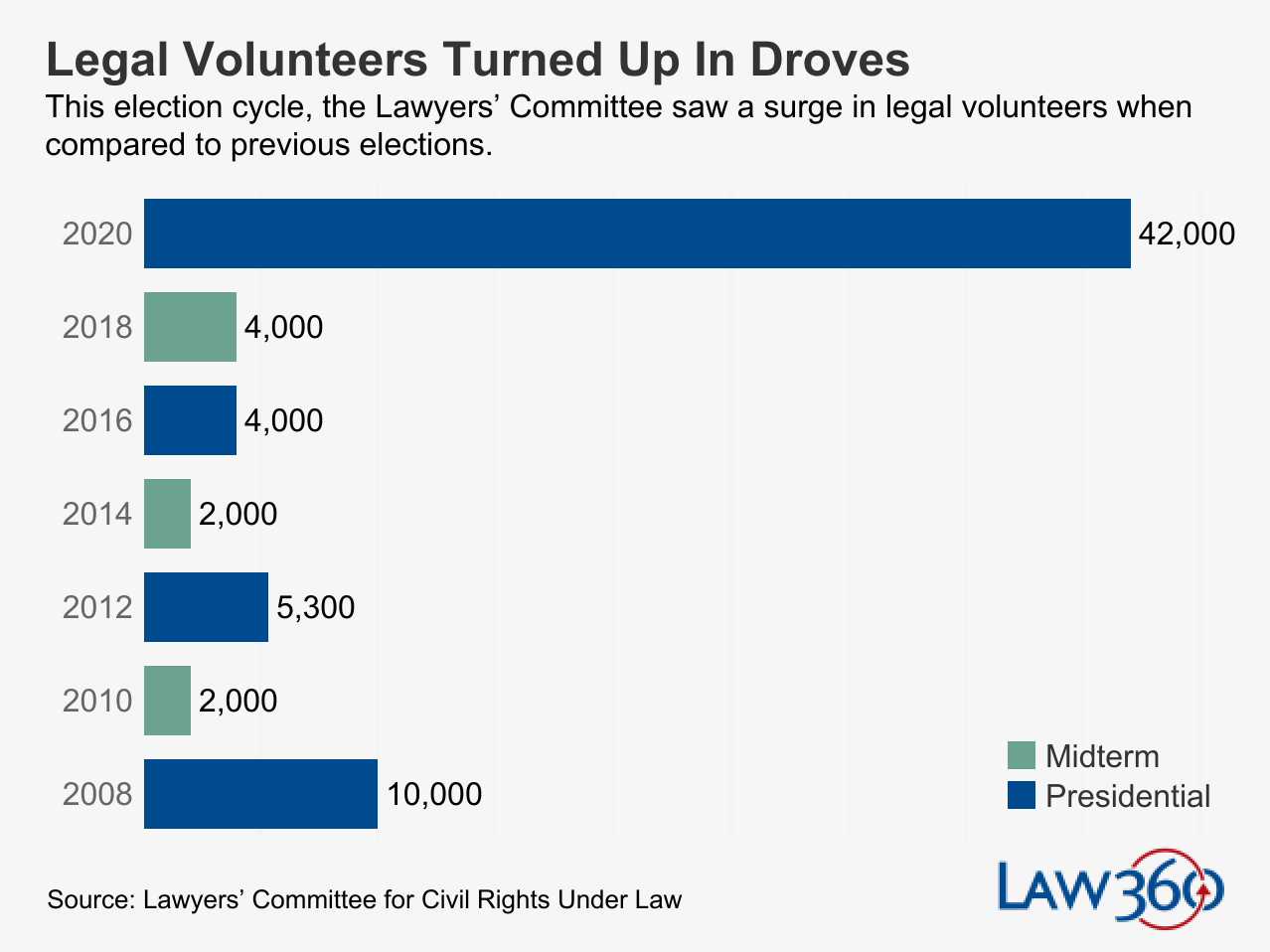 
"It was certainly quite taxing this year, it was harder to coordinate, but our people stepped up," Damon Hewitt, the executive vice president of the Lawyers Committee, told Law360. "We were able to help a lot of voters."

Throughout election season, the Election Protection program ran a voter protection hotline that fielded 185,000 calls from voters in 11 languages, including 30,000 calls on election day itself — and that's not counting text messages.

Proskauer Rose LLP contributed 400 volunteers to the project, including staff attorneys, former employees and in-house corporate clients, up from 100 in 2016, according to pro bono partner William Silverman.

"The number one issue that we dealt with was confusion. Confusion over where to go to vote, confusion about absentee ballots, about voter ID laws — confusion that we see every two years," Silverman told Law360. "But because of Covid, it was much greater this time around," he added, referring to a host of new voting procedures like curbside and drive-through voting, expanded early voting and expanded mail-in voting.

Across the country, familiar obstacles to voting were still present this year, Hewitt said, including voter identification issues, language access and accommodation for people with disabilities.

The Lawyers' Committee also litigated to eliminate obstacles to voting ahead of voters casting their ballots.

BigLaw Had A Big Presence

Over 150 law firms participated in the Lawyers' Committee's election activities. Among them were several firms that had large numbers of attorneys sign up to lend a hand:

Jeremy Karpatkin, a senior attorney at Arnold & Porter, recalled volunteers springing into action when Florida's voter registration page crashed on the last day of registration, keeping a significant number of people from registering.

"We had a great response when we put out the call for volunteers, an extraordinary response," Karpatkin said. "We put out the papers quickly. While we didn't get quite the result we were hoping for, but the state did extend its registration deadline by one day."

Arnold & Porter said 135 volunteers from the firm logged over 2,095 hours for the Lawyers' Committee.

John Freedman, also from Arnold & Porter, served as the election protection program's strategic national counsel on vote by mail. "Before the postal service announced its changes, we had flagged that voting by mail was going to be a critical component of this election," Freedman said.

The program received reports of Georgia voters not getting their ballots weeks after they requested them and weeks after they had been reported as shipped, Freedman said. The program ended up resolving the issue without litigation, finding allies to negotiate directly with the postal service and remedy the problem.

"When I first circulated the opportunity to help with postal operations, I had more volunteers than we knew what to do with," Freedman said. The Arnold & Porter volunteers had initially planned to do advance preparation for litigation, but also ended up being able to do advocacy and outreach about mail-in ballots to election officials across the country.

"Obviously it's not perfect, but I'd like to think it was significantly better than it would've been otherwise," Freedman said.

Irrespective of the hotly anticipated question of who wins the presidency, Hewitt says, the record number of ballots cast attest to the fact that innovative voting methods debuted this year are clearly a win for access.

"While everybody's focusing on who wins, our focus is now that we have expanded protections, can we keep that energy?" Hewitt said. "There's only two ways to go. Either you make it easier for people to vote, or you make it harder. Is this a democracy or is it something else?"