Biden Beats Trump At The Polls As Court Battles Continue 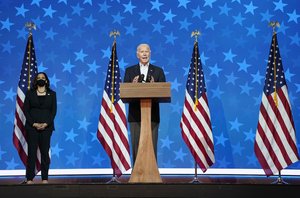 The Associated Press called Pennsylvania and Nevada for Biden on Saturday, pushing the former vice president past the threshold of 270 electoral votes and putting him on track to become the nation's 46th president. The vote tallies have shifted considerably since Tuesday, with Biden making significant gains in Pennsylvania and Georgia, and Trump narrowing the margin in Arizona even after it was called by AP and Fox News on election night for the former vice president.

Biden said on Twitter Saturday that he was honored to be chosen to lead the country. "The work ahead of us will be hard, but I promise you this: I will be a president for all Americans — whether you voted for me or not. I will keep the faith that you have placed in me."

Meanwhile, the Trump campaign vowed to continue its battle for the presidency in the courts, saying in a statement Saturday that the election was "far from over."

"Beginning Monday, our campaign will start prosecuting our case in court to ensure election laws are fully upheld and the rightful winner is seated," the campaign said.

The Trump campaign has been filing lawsuits to stop vote counting in Georgia, Michigan and Pennsylvania, claiming there was not enough transparency in the process. The campaign followed that up with additional litigation in battleground states Thursday and some of the claims have already been rejected by various judges.

The campaign is also trying to intervene in a U.S. Supreme Court suit over mail-in ballots in Pennsylvania, a bid Keystone State Democrats opposed on Thursday. In addition, recounts are possible in Wisconsin, Pennsylvania and Georgia, all of which Biden has either won or is leading after Trump carried them in 2016.

The Biden team has blasted the legal actions as "meritless."

"These lawsuits don't have to have merit. That's not the purpose," said Bob Bauer, a top attorney in the Biden campaign and former White House counsel under President Barack Obama. "It's to create an opportunity for them to message falsely about what's taking place in the election process."

"Donald Trump continues to push a flailing strategy designed to prevent people's votes from being counted," Biden campaign manager Jen O'Malley Dillon said on Thursday morning. "These legal suits are meritless and nothing more than an attempt to distract and delay what is inevitable: Joe Biden will be the next president of the United States."

On Saturday night, Biden addressed the nation from his home state in Wilmington, Delaware. He noted that 74 million votes had been cast in his favor — reportedly more than any presidential ticket has ever garnered — currently outpacing Trump by roughly 4 million votes. He said voters have spoken and they have delivered "a clear victory, a convincing victory, a victory for we the people."

Biden urged the nation to come together and he noted that there is still work to be done in combating the coronavirus and the nation's economic fallout from the pandemic, which he noted has cost over 200,000 American lives and caused 20 million U.S. workers to lose their jobs.

He said he plans to name a team of advisors Monday who will prepare a blueprint "built on a bedrock science" that he will begin implementing once he takes office Jan. 20. Biden emphasized that the nation must not only control the coronavirus, but it must also root out systemic racism and "get climate change under control." He added that it's a time for the nation to heal and to "put away the harsh rhetoric."

"To make progress we have to stop treating our opponents as our enemies," he said. "They are not our enemies."

Update: This story has been updated to include details from Biden's speech Saturday evening.