Law360 (November 6, 2020, 8:36 PM EST) -- After former Vice President Joe Biden won the presidency Saturday based on his apparent victory in Pennsylvania, Republicans and the Trump campaign continue to look to the courts, including efforts in Nevada to involve the U.S. Department of Justice and pause the use of machines to verify ballot signature matches. 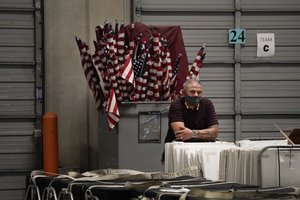 A worker at the Clark County Election Department in Las Vegas takes a break Friday in front of stored American flags that were used on Election Day (AP Photo/Jae C. Hong)

Republicans saw mixed success in court on Friday, losing a bid in Nevada to require county officials to review ballot signatures manually while notching a small win in Pennsylvania state court in a suit over provisional ballots.

The Associated Press called Pennsylvania and Nevada for Biden on Saturday, pushing the former vice president past the threshold of 270 electoral votes needed to become the nation's 46th president.

The lawsuit, filed hours after Joe Biden won the presidential election after his projected victory in Pennsylvania, marks the campaign's latest attempt to challenge the election's results.

Claiming that in-person votes were wrongly not counted due to erroneous directions about how to work the county's tabulation machines, the campaign asked the court to require election officials to manually inspect all of the ballots at issue.

According to the complaint, poll workers "frequently deviated" from protocols by instructing individuals voting in-person on Election Day to, when the machine rejected their ballots over irregularities, push a button to override it. However, those votes may not have counted if the machine couldn't discern the voter's intended candidate, even if a human could verify the voter's intent visually, the suit says.

The Pennsylvania Attorney General's office urged the U.S. Supreme Court on Saturday to reject Republicans' request for an order requiring election officials to separate late-arriving ballots, telling the high court that officials are already doing this.

The state's response -- which was filed the same day that the Associated Press declared that Joe Biden had won the state, and by extension, the presidential election -- was lodged in response to a Republican-backed bid to invalidate ballots that were postmarked on time, but arrived up to three days past Election Day.

A state court judge had already ordered election officials to separate out the contested ballots, and the Secretary of State's office has issued guidance instructing counties to do so.

However, in an emergency request to the justices on Friday afternoon, the state Republican party argued that the guidance wasn't legally binding and that it was "unclear" whether all counties in the state were complying.

On Friday evening, Justice Samuel Alito told counties that they had to follow that guidance to segregate the contested mail-in ballots so they would not be potentially intermingled with ballots that arrived on or before Election Day, but he did not grant the Republicans' request that those ballots not be counted.

"There is no evidence that any county is disobeying that clear guidance to segregate these votes, and the Republican Party offers only speculation that certain unidentified counties may ignore that repeated guidance or that the Secretary will inconsistently change course," the state responded on Saturday. "Such conjecture does not justify the extraordinary relief sought here."

Before Election Day, the Supreme Court had previously refused to take up Republicans' challenge to a state court ruling allowing ballots received by Nov. 6 to be counted, but left the door open to revisit the issue later.

Following a hearing on Friday evening, a Nevada federal judge shot down a request by Republicans in the state to halt the use of signature matching software by election officials in Clark County, which includes Las Vegas, and revise the county's policies toward individuals observing vote counting.

According to the suit, a Nevada voter was turned away at the polls because she had already voted by mail, though she claimed that she had not signed or mailed in a ballot. A ballot for her was nonetheless accepted under the county's signature verification software, the suit says.

The Democratic National Committee and Nevada State Democratic Party had intervened in the litigation, slamming the suit as "entirely fabricated claims of voter fraud and vote dilution."

The county board of elections also disputed the claims, arguing that the voter had been offered and had refused a provisional ballot, and that Prudhome had been granted access to both the media and observers' areas.

Noting that the matter was already pending in a separate case before the state's Supreme Court, U.S. District Judge Andrew P. Gordon said that the dispute was "an issue of significant state concern involving state laws and should be interpreted by state courts."

But he also stressed that he was denying the Republicans' claims for relief because there was "little to no evidence that the machine isn't doing what it's supposed to do," nor any evidence that the voter's allegedly forged ballot had even gone through the signature machine.

"Let me be clear that I'm not deciding this case on a technicality or some esoteric legal principle. Rather, I'm deciding that the plaintiffs have not come to the court at this point with a sufficient legal showing or sufficient legal basis to get what is required to obtain the extraordinary relief of an injunction," Judge Gordon said.

The day before, the Silver State's Republican party said on Twitter that it has asked the DOJ and U.S. Attorney General William Barr to address what it described as thousands of instances of voter fraud in a state where Biden has held a steady lead.

"Our lawyers just sent a criminal referral to AG Barr regarding at least 3,062 instances of voter fraud. We expect that number to grow substantially," the party said in a tweet late Thursday. "Thousands of individuals have been identified who appear to have violated the law by casting ballots after they moved from NV."

Representatives for the Nevada state party did not respond to comment requests Friday morning. A DOJ representative confirmed the department had received the referral and was looking into it.

In the latest in a series of hearings in three consolidated suits alleging that mail-in ballot delays were interfering with Americans' ability to vote, voting rights advocacy groups pressed the U.S. Postal Service for more specific data about whether ballots originated from or arrived in specific locations.

Doing so would help them more fully understand whether the ballots were received by various states' respective deadlines.

Joseph Borson of the DOJ said that the Postal Service could likely provide the data, but cautioned that "because of the nature of this information, the more finely you try to cut it, the less reliable the information actually gets."

U.S. District Judge Emmet G. Sullivan, who on Thursday ordered twice-daily sweeps of mail facilities in North Carolina and Pennsylvania, asked the two sides to try to work together on a proposed order regarding the data and scheduled another hearing for Monday morning.

Although the voting advocacy groups expressed frustration about the Postal Service not complying with Judge Sullivan's orders, Friday's hearing was calmer in tone relative to one a few days earlier, when the judge took the agency to task.

"I just want compliance with the orders," Judge Sullivan said Friday. "I still think back about the other day when we had the eleventh hour noncompliance and that was preventable."

The judge added, "It's regrettable it went down that way … and the court is sensitive to posting orders that require compliance by a certain timeline and we haven't checked with the people who need to do the data crunching."

Amid a Republican-backed bid to throw out "cured," or corrected, ballots from voters whose mail-in ballots were rejected, a Pennsylvania appellate court put a temporary hold on some of the provisional ballots yet to be counted in that state Friday, but did not order them thrown out entirely.

Partially granting a preliminary injunction requested by Republican state representative candidates Mike Kelly and Joseph Hamm, Commonwealth Court Judge P. Kevin Brobson ordered election officials to segregate any provisional ballots cast on Election Day by voters who had also submitted their mail-in ballots on time, so it can be determined if one or the other were valid and could be counted.

Judge Brobson did not rule on the merits of the case, which claims Secretary of the Commonwealth Kathy Boockvar gave illegal guidance to counties that allowed them to share which voters had their ballots tossed out over issues like missing signatures or privacy envelopes so that counties, campaigns and political parties could reach out and invite those voters to cast provisional replacement ballots in person.

Update: This story has been updated with the results in Pennsylvania and Nevada as well as the filing of the Arizona lawsuit and developments in the Supreme Court case.