Even Trump's Most Promising Pa. Lawsuits May Prove Futile

Law360 (November 5, 2020, 10:23 PM EST) -- Despite a flurry of litigation from President Donald Trump and GOP allies as his lead over Joe Biden in the closely contested battleground state of Pennsylvania slips steadily away, experts say the campaign stands a slim chance of voiding enough ballots to notch a victory even in the cases most likely to succeed. 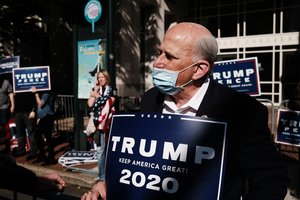 Rep. Louie Gohmert of Texas holds a Trump 2020 sign outside the Philadelphia Convention Center on Nov. 6. Experts say even the most promising litigation from President Donald Trump and GOP allies over Pennsylvania's election process may not be enough to notch a victory for Trump in the state. (Photo by Spencer Platt/Getty Images)

The Trump campaign and other Republican candidates are pursuing at least five avenues of what experts say could be potentially successful litigation in state and federal courts challenging various procedures put in place by the Pennsylvania Department of State and county-level election boards. But even the most promising of them may make little difference.

Experts said the strongest of all the challenges pending could be a potential U.S. Supreme Court appeal over whether to void a three-day extension for the receipt of mail-in ballots postmarked by Election Day.

"Of all the lawsuits, that's the only one I think that would have any actual effect on the ultimate result," Duquesne University law professor Bruce Ledewitz told Law360 on Thursday.

But whether the case is enough to turn the tide for Trump in Pennsylvania is unclear.

Speaking at a press conference late Thursday afternoon, Secretary of the Commonwealth Kathy Boockvar said she expected a much smaller number of ballots to come in during the three-day extension than the 60,000 she said were returned in the three days after the state's primary election in June.

"I don't expect it to be a significant amount," she said, though she declined to provide a more exact figure. "It's a significantly lower number than we thought."

The appeal before the U.S. Supreme Court stems from a decision by the Pennsylvania high court in mid-September agreeing to allow mail-in ballots postmarked by Election Day to be counted if received by county election officials by 5 p.m. on Nov. 6.

The state's high court reasoned that the twin stresses of the ongoing coronavirus pandemic and delays in mail delivery at the U.S. Postal Service threatened to disenfranchise voters in violation of the Pennsylvania Constitution.

The state's Republican Party asked the U.S. Supreme Court to stay the decision as it pushed arguments that the ruling usurped the legislature's authority to manage elections and changed the definition of "Election Day."

The U.S. Supreme Court shot down the stay bid in a split decision before Justice Amy Coney Barrett joined the bench, but if the case goes back there, Ledewitz believes she would ultimately side with her conservative colleagues.

Michael Dimino, a professor at Widener University Commonwealth Law School, was less bullish about the chances that the Supreme Court would opt to revisit the case at all.

Other litigation being pursued by Republicans includes a battle over disparate efforts by county election boards to reach out to voters before the election in order to give them a chance to cure procedural defects with mail-in ballots such as missing secrecy envelopes and signatures.

Two Republican congressional candidates have claimed in a pair of lawsuits that differing approaches to so-called ballot curing in different counties across Pennsylvania constitute a violation of equal protection principles.

The Department of State, meanwhile, has taken the position that the ruling didn't foreclose the possibility of counties exercising their own discretion to reach out to voters about defects.

Indeed, in guidance issued to counties in the week prior to Election Day, a top state official said that ballots should be scanned in as they came in so as to notify voters they'd been received, and to flag any potential problems.

"That way, the voter has warning that their vote will not be counted unless they take further action," the guidance said. "You may also feel free to contact the voter if you have other contact information for them."

Penn State University professor Daniel Mallinson told Law360 on Thursday that he thought that judges could ultimately prove sympathetic to the claims.

"That case is really interesting to me, because if you allow ballot curing in one place but not another then voters were treated very differently," he said.

While a federal judge in one of the ballot-curing cases expressed skepticism over the claims during a hearing on Wednesday morning, a state court judge is scheduled to hear arguments in the second case on Friday.

Dimino agreed that he believed the case potentially had merit.

"It's certainly plausible," he said. "States are not supposed to change the rules of elections during the election, and it is distressing how many times the rules of this election have shifted in the weeks before Election Day."

But the question still remains whether a decision in favor of the Republicans in either of the cases would result in enough votes being thrown out to tip the election back in Trump's favor.

In the case argued in federal court on Wednesday, which involved ballot-curing by officials in Montgomery County outside of Philadelphia, an official testified that there were just shy of a hundred votes where errors had been corrected in advance of Election Day.

"I don't know how many of those ballots there might be, but it seems like one where it could make a difference if it ends up being really, really close," Mallinson said.