Law360 (November 19, 2020, 8:59 PM EST) -- A Georgia federal judge denied on multiple grounds Thursday an emergency bid to halt the certification of Georgia's general election results before Friday's deadline, saying the request by an Atlanta attorney was too late, without merit and would disenfranchise millions of voters. 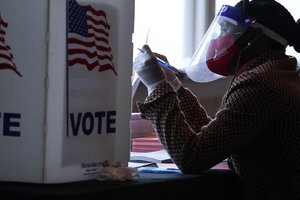 A poll worker in Atlanta assists a voter on Election Day. A Georgia federal judge on Thursday rejected an emergency bid to halt the certification of the state's general election results. (AP Photo/Brynn Anderson)

At the close of a three-hour Zoom hearing, U.S. District Judge Steven D. Grimberg rejected plaintiff L. Lin Wood Jr.'s "eleventh hour" motion for a second recount of Georgia's Nov. 3 presidential votes — which the state must certify by Nov. 20 — and said Wood had no standing to bring his constitutional violation claims.

Judge Grimberg described as "quite striking" and "a generalized government grievance" Wood's Nov. 13 suit against Georgia Secretary of State Brad Raffensperger and Georgia Election Board members. Wood, a high-profile trial attorney in Atlanta, challenged the election officials' March settlement agreement with the Democratic Party of Georgia to strengthen signature checks for absentee ballots. Wood claimed the change in procedure was made without authority and went against what was approved by the state's legislature.

"Just because the right to vote is fundamental does not mean that individual voters have the right to direct the manner in which votes will be cast, accepted or rejected," Judge Grimberg said from the bench. "The settlement agreement was consistent with state law … if anything it achieves or seeks to achieve consistency among the county election officials in the state to follow the same procedure … and in doing that it actually furthers plaintiff's stated goals of achieving fair and transparent public elections."

The judge said Wood had no standing as a private citizen, individual voter or campaign donor to bring his claims of constitutional violations against his rights to equal treatment under the law, a fair and transparent election, and due process. He also criticized Wood for waiting more than eight months to challenge the March settlement agreement, a stretch in which there were three state elections.

"To halt the certification at literally the eleventh hour would breed confusion and potential disenfranchisement that I find has no basis in fact or in law," Judge Grimberg said during the hearing.

Wood claimed Raffensperger and members of the Georgia Election Board had no authority to settle with Georgia Democrats in March over absentee ballot signature checks because only the Georgia General Assembly can set election procedures. He said the extra checks were cumbersome and likely to result in the acceptance of more absentee ballots than was proper, diluting his own vote and tainting the election results.

Wood amended his complaint on Monday to show he is a Republican and donated money to several Republican candidates in the Nov. 3 election. He also added, in his Tuesday motion to halt certification, affidavits from a dozen people involved in or monitoring Georgia's presidential election audit claiming it was a sloppy affair.

Fulton County poll manager Susan Voyles testified in the hearing about her concerns with the audit, and particularly a stack of "pristine" absentee or provisional ballots favoring Democratic candidate Joe Biden that didn't appear to have been handled or folded into an envelope.

Voyles said she was a "very active" Republican but that she was objective in her voluntary election role, which she's had for 20 years. She said the paper of those particular ballots felt different and they looked as though they had gone through a copy machine.

Ray S. Smith III of Smith & Liss LLC, representing Wood, said monitors for President Donald Trump's reelection campaign were not allowed meaningful access to Georgia's election audit, and that a full recount should happen before the state's election results are certified. He also asked the court that Wood and the Republican Party be given 24 hours' notice of any and all election activity and to inspect the envelopes for all absentee ballots in the presidential election for signature matching.

"Why should we sit here and find out later that this was done wrong?" Smith said. "Your honor has the opportunity to make sure that everything is done the right way."

But Russell D. Willard of the Georgia Attorney General's Office, a lawyer for Raffensperger and the Georgia Election Board, said the state's signature check requirements for absentee ballots were in harmony with statutory election guidelines. He said the state couldn't undo the audit and certification of elections results by county officials and that Wood's meritless claims were fatally based on his political persuasion.

"I understand the plaintiff's frustration at his favorite candidate's loss, however that does not justify the attempted manufacture of constitutional violations in an attempt to undo the intent of the electorate," Willard said.

The Democratic Party of Georgia and the Democratic senatorial and congressional campaign committees asked to intervene in the suit, which Judge Grimberg allowed from the bench.

Kevin J. Hamilton of Perkins Coie LLP, an attorney for the Democrats, said Wood's requested relief to invalidate millions of votes "on the flimsiest of evidence" was unprecedented and "utterly astonishing." He said it was unsupported by the law or case precedent and would cause "deep, irreparable, long-lasting harm" to millions of Georgians.

Other Republican challenges to Georgia's Nov. 3 election have failed, including a suit brought by Trump's campaign and Georgia Republicans against election officials in the Savannah area, which was dismissed by a state court judge Nov. 5. The representation of Trump's campaign in that suit sparked conflict-of-interest allegations, as the same attorneys represent Raffensperger and state election officials in other election litigation.

The case is Wood v. Raffensperger et al., case number 1:20-cv-04651, in the U.S. District Court for the Northern District of Georgia.