Law360 (November 20, 2020, 8:16 PM EST) -- Pfizer and its German partner BioNTech filed an emergency approval request with the U.S. Food and Drug Administration on Friday, asking the regulator to sign off on their COVID-19 vaccine candidate, which they claim has a 95% effectiveness rate with "no serious safety concerns observed to date." 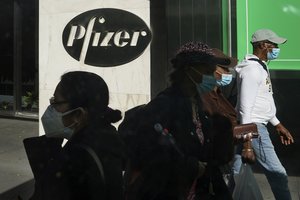 In a joint statement, the New York-based pharmaceutical giant Pfizer Inc. and the Mainz-based biotechnology company BioNTech SE said if their proposed vaccine — dubbed BNT162b2 — is approved, they expect to be able to produce 50 million doses by the end of the year and up to 1.3 billion doses next year. The companies will be ready to distribute the first doses within hours of government approval, according to the statement.

The companies are currently seeking regulatory approval for the proposed vaccine in other countries as well, including in Australia, Canada, Europe, Japan and the U.K., according to the statement. Earlier this month, they announced they already entered a supply deal with the European Union for 200 million doses, with an option for supplying an additional 100 million doses to the EU. If approved, deliveries could begin by the end of the year.

Pfizer CEO Dr. Albert Bourla said in a statement Friday that delivering a safe and effective vaccine has never been more urgent, particularly as the rate of COVID-19 infections continues its "alarming rise" globally.

BioNTech CEO Ugur Sahin added that they intend to continue to work with regulatory agencies around the world so that they can rapidly distribute the vaccine globally, if it's approved.

"As a company located in Germany in the heart of Europe, our interactions with the European Medicines Agency are of particular importance to us and we have continuously provided data to them as part of our rolling review process," Sahin said.

The companies' FDA submission includes data from a phase 3 clinical study that began in July in which 43,661 volunteers at 150 clinical trial sites across the U.S., Europe, Latin America and South Africa were given either doses of the vaccine or a placebo, according to the statement.

The companies said to date, the study's data monitoring committee has not reported any serious safety concerns related to the vaccine. However, they said they will monitor participants for long-term effects for two years after they receive their second dose of BNT162b2.

Pfizer also noted in the statement that the company has "vast experience and expertise" with shipping vaccines similar to BNT162b2, which uses mRNA technology and needs to be kept at extremely cold temperatures, and that the drugmaker has distribution hubs around the world that can store doses for up to six months.

Shortly after the drugmakers' announcement Friday, President Donald Trump criticized Pfizer "and others" during a press briefing and claimed the companies waited until after the presidential election to announce their phase 3 clinical trial results in order to hurt his chances at reelection. He added that the drugmakers would have never been able to do what they've accomplished without his help.

Pfizer and BioNTech's FDA approval request comes on the heels of an announcement by Massachusetts-based biotechnology company Moderna that its COVID-19 vaccine candidate, which is also an mRNA vaccine, had a 94% effectiveness rate in its third clinical trial phase.

Moderna also recently announced that it has entered a supply agreement with the U.K. to begin distribution in March, pending the vaccine's approval. Moderna is currently ramping up production to be able to deliver roughly 500 million doses per year and possibly up to 1 billion doses per year starting in 2021, the company said.

The race to develop a COVID-19 vaccine and secure regulatory approval comes as the U.S. and other nations around the world are experiencing unprecedented spikes in the number of new coronavirus cases reported daily. As of Friday, the U.S. had reported a total of 11.6 million confirmed cases and 251,000 deaths due to the virus since January, with more than 1 million new COVID-19 cases reported in the U.S. over the past seven days, according to the U.S. Centers for Disease Control.

In light of the rising infection rates, the CDC has advised that Americans to postpone traveling and warned that "the safest way to celebrate Thanksgiving is to celebrate at home with the people you live with."