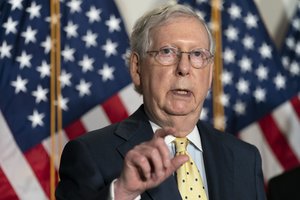 Mitch McConnell's plan would increase the charitable giving deduction amount to $600 for individuals and $1,200 for those filing jointly. (AP Photo/Jacquelyn Martin)

McConnell announced a COVID-19 relief plan to GOP senators on Tuesday after he and House Minority Leader Kevin McCarthy, R-Calif., talked with Treasury Secretary Steven Mnuchin and White House Chief of Staff Mark Meadows to determine what President Donald Trump would be willing to sign into law. The legislation could be included in an end-of-the-year spending bill to keep the government open beyond Dec. 11.

McConnell told reporters that there's no time for a "messaging" bill and he wanted to judge support for Trump's priorities among Republican lawmakers. McConnell received a letter Monday night from House Speaker Nancy Pelosi, D-Calif., and Senate Minority Leader Chuck Schumer, D-N.Y., with what he characterized as a "bloated" COVID-19 relief proposal that can't win Senate support. He urged action on the short-term GOP relief plan now ahead of 2021 deliberations.

"I think we all know that after the first of the year there's likely to be a discussion about some additional package of some size next year, depending upon what the new administration wants to pursue," McConnell said.

McConnell's plan includes an expanded above-the-line deduction for charitable giving, building on the $300 deduction for 2020 enacted in the Coronavirus Aid, Relief and Economic Security Act

. The GOP plan would increase the charitable giving deduction amount to $600 for individuals and $1,200 for those filing a joint return.

The Republicans also proposed providing two years of tax credits for contributions to private and religious schools that was originally proposed in the S. 4284, the School Choice Now Act. That proposal failed to advance in the Senate in September as part of the GOP's "skinny" COVID-19 relief bill.

The GOP proposal would also seek to help restaurant owners and employees by making business meals 100% tax deductible, which is a provision in S. 4319, the Supporting America's Restaurant Workers Act introduced by Sen. Tim Scott, R-S.C., in July. The deduction would be available for expenses incurred before 2021, according to Scott's bill.

"There are upwards of 150,000 COVID cases per day and miles-long lines at food banks nationwide, and Leader McConnell wants to do tax breaks for three-martini lunches and broad legal immunity for his corporate donors," he said in a statement. "It's insulting to the American people."

Wyden and other Democratic senators unveiled a proposal Tuesday that would reinstate and extend the $600 weekly federal unemployment benefits that were enacted as part of the CARES ACT, but expired in August.

In the House, Pelosi said that Mnuchin planned to review the proposal that she and Schumer offered to Republicans, as well as a separate proposal for COVID-19 relief offered by a group of moderate House and Senate lawmakers.

"Additional COVID relief is long overdue and must be passed in this lame duck session," Pelosi said in a statement.

The bipartisan $908 billion proposal from moderates Sen. Joe Manchin, D-W.Va., Sen. Susan Collins, R-Maine, and others, was unveiled at a news conference called to announce that lawmakers were working to break the legislative logjam that has prevented action on pandemic relief since passage of the CARES Act.

Although details of the plan were not released, lawmakers said the bill would address the tax deductibility of loans made under the Paycheck Protection Plan. The Internal Revenue Service said in November that businesses that expect PPP loan forgiveness cannot claim deductions for expenses covered by the funds.

Sen. Bill Cassidy, R-La., said the proposal gives both Democrats and Republicans some of the provisions that they requested in the relief legislation.

"That combination reflects what Congress is supposed to do, reconciling different priorities, but ultimately doing something good for the American people," he said at a news briefing.