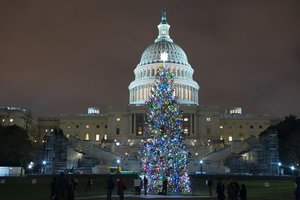 The U.S. Capitol in Washington, D.C., on Sunday night. A deal on roughly $900 billion in federal coronavirus relief came after a week of intense negotiations among congressional leaders and the White House over the package's size and scope. (AP Photo/Jose Luis Magana)

The deal announced by House Speaker Nancy Pelosi, D-Calif., came after a week of intense negotiations with Senate Majority Leader Mitch McConnell, R-Ky., Treasury Secretary Steven Mnuchin and other congressional leaders over the size and scope of the package.

Lawmakers expected to pass a stopgap spending bill on Sunday night to keep the federal government operating an extra day while Congress works to draft and review the final legislation.

In a floor speech announcing the agreement, McConnell called it a "major rescue package" for the American people.

"If our citizens continue to battle the coronavirus this holiday season, they will not fight alone," he said.

Many of the provisions in the agreement were based on the Emergency Coronavirus Relief Act of 2020, a bipartisan proposal unveiled Dec. 14 by Sens. Joe Manchin, D-W.Va., Susan Collins, R-Maine, and other moderate legislators. It includes funding for distribution of the coronavirus vaccines, virus testing and health care workers.

Lawmakers have debated a follow-up relief bill since the Coronavirus Aid, Relief and Economic Security Act was signed into law in March, but it wasn't until this week they abandoned provisions for more state and local funding and liability protections for businesses that had sidelined progress. Sunday, they were able to reach agreement on several thorny issues left over from the CARES Act.

The new agreement clarifies that business expenses paid for using tax-free loans made under the CARES Act's Paycheck Protection Program are tax deductible, according to Sen. John Thune, R-S.D. He said Mnuchin objected to allowing deductibility but eventually backed down.

"Most people, when they got those PPP loans, had an expectation that they're going to be able to continue to deduct their business expenses and have operated accordingly," Thune told reporters.

The agreement includes more than $284 billion for additional PPP loans, expands the program to nonprofit organizations and makes it more accessible to small businesses, according to a summary provided by Pelosi.

The legislation would also authorize the Internal Revenue Service to send economic impact payments of $600 to individuals and $2,400 to a family of four, Sen. Bernie Sanders, I-Vt., told reporters. The payments are less than those included in the CARES Act, which authorized amounts of $1,200 to individuals and $2,400 to couples, with payments phased out based on income levels.

It would also provide 11 weeks of enhanced federal unemployment insurance benefits of $300 per week for jobless Americans, $13 billion in increased SNAP and child nutrition benefits and $82 billion in funding for colleges and schools.

The agreement would also boost the New Markets Tax Credit program by providing additional Treasury funding for community development financial institutions. Approximately $3 billion of the funding for CDFIs will be targeted to developments in low-income and minority communities.

It also includes $25 billion in tax-free rental assistance and expands the Low Income Housing Tax Credit program to build and redevelop affordable housing. The agreement also expands the earned income tax credit and the child tax credit to workers who have lost their jobs during the pandemic. The credit expansions would be based on 2019 income levels.

The agreement would also provide a tax credit for companies offering paid sick leave to workers and make improvements to the employee retention tax credit.

"The emergency relief in this agreement, the second largest in history only to the CARES Act, is an important first step" that Democrats hope to expand in 2020, Pelosi said.

The summary didn't include detailed information about the fate of the so-called tax extenders, a package of dozens of expiring, temporary tax incentives, but Senate Finance Committee Chair Chuck Grassley, R-Iowa, told reporters that he thought the provisions would pass Congress as part of the pandemic relief and omnibus spending bill.

"I've seen firsthand how incentives for craft beverage producers have helped Oregon small businesses grow, hire and provide new benefits to their workers," he said in a statement.