By Anne Cullen
Law360 is providing free access to its coronavirus coverage to make sure all members of the legal community have accurate information in this time of uncertainty and change. Use the form below to sign up for any of our weekly newsletters. Signing up for any of our section newsletters will opt you in to the weekly Coronavirus briefing.


Law360 (January 5, 2021, 8:43 PM EST) -- The COVID-19 pandemic ushered in a swell of lawsuits from workers challenging layoffs in 2020, while the U.S. Equal Employment Opportunity Commission launched fewer enforcement actions and the plaintiffs bar continued to notch wins in the wage and hour arena, according to a report released Tuesday by Seyfarth Shaw LLP.

In the latest edition of the management-side employment firm's annual Workplace Class Action Litigation Report, Seyfarth found that the health crisis sparked more than 1,000 workplace lawsuits, and employee claims over firings landed front and center in nearly three-quarters of the disputes. 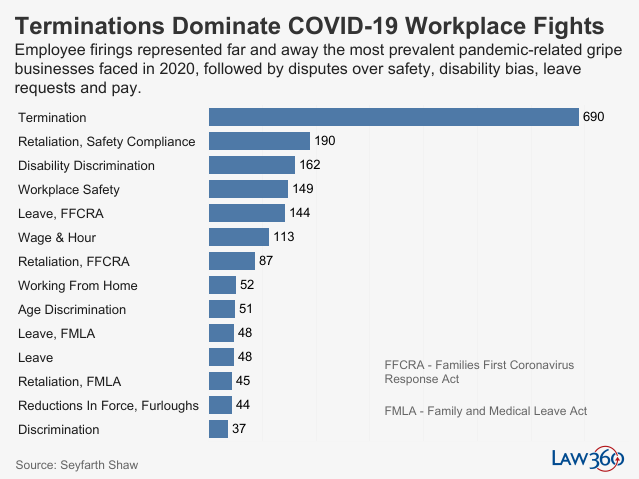 
Report author Gerald Maatman said this phenomenon isn't unexpected, as a jump in termination lawsuits is a common fallout from an economic downturn that puts a large swath of people out of work.

"Historically, what occurred before occurred this past year," he said. "When people lose their job, they're more focused on their legal rights or obligations from employers because people are afraid."

Workers' concerns about on-the-job safety accounted for the next most common complaints in these cases, trailed by grievances over family leave, disability discrimination, and wage and hour issues, according to the report.

Federal workplace enforcers like the EEOC and the U.S. Department of Labor shied away from litigation in 2020 under the business-friendly Trump administration, the law firm said.

Businesses faced fewer EEOC complaints last year, with the commission firing off fewer than 100 merits lawsuits, compared with over 140 the EEOC lodged in 2019. Even with a Democrat taking over the White House this month, Seyfarth predicted that the Republican majority atop the EEOC will continue to curb the cases brought by the watchdog.

But the Labor Department is a different story, as Seyfarth said President-elect Joe Biden's forthcoming pick to run the agency will shift the DOL's priorities significantly and spearhead enforcement in the wage and worker classification space.

"If you're a chief legal officer of a company or an executive of a company, obviously one of the things on your mind is the federal agency watchdogs are going to be much more attuned to what's going in your workplace than they might've been in the last year under the Trump administration," Maatman said. 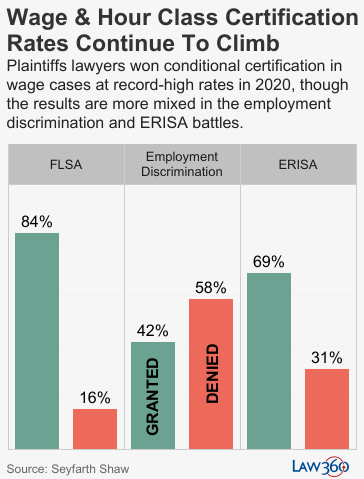 Among the other trends identified in Seyfarth's report, the firm found that wage and hour actions continued to represent a "sweet spot" for worker-side attorneys. A survey of nearly 300 conditional certification fights in Fair Labor Standards Act cases showed plaintiffs coming out on top 84% of the time, up from 81% last year.

Maatman called that statistic "startling" and advised that business leaders who may be wondering where to focus their compliance efforts should home in on wage and hour issues.

But in lawsuits accusing companies of discriminating against employees under Title VII or committing benefits violations under the Employee Retirement Income Security Act, certification results were more mixed, Seyfarth found.

Maatman said the disparity stems in part from the difference in the way judges treat those types of claims. Although the U.S. Supreme Court's 2011 decision in Wal-Mart v. Dukes

ratcheted up the certification requirements in class and collective cases, Maatman said most judges hold FLSA disputes to a different standard.

"If you're a plaintiffs lawyer, and one of the things you're interested in is spending your time where you're going to get the highest return, it's clearly in the wage and hour area because it's easier to certify a case there," he said.

Maatman added later that "the money to be made can be made quicker and easier in the wage and hour space, and the statistics this year certainly bear that out."

three years ago, which cleared employers to use mandatory arbitration agreements that contain class action waivers, finding that federal wage litigation is down and management-side arbitration wins are up since the ruling was issued.

"The latest class action litigation statistics show that motions to compel arbitration have become an increasingly effective defense to class action lawsuits since Epic Systems," according to the report.

However, Seyfarth's report also noted that under the incoming pro-worker administration, Epic Systems could face legislative attacks, especially if Democrats win control of the Senate.

"Along with the arbitration landscape, the shift in administrations is likely to bring increased regulation of businesses, renewed enforcement efforts, and policy changes at the agency level that will result in efforts to abandon or overturn pro-business rules of the Trump administration," according to the report.