How COVID Has Reshaped M&A Agreements


Law360 (March 9, 2021, 9:31 AM EST) -- Nearly one year into the COVID-19 pandemic, it's clear that even merger and acquisition agreements are not immune to the novel disease, as dealmakers are negotiating more specific material adverse effect clauses and leaning more often on the use of earnouts as part of deal consideration.

The World Health Organization called the coronavirus outbreak a global health emergency on Jan. 30, 2020, and on March 11 it declared it a global pandemic. The virus coursed through the U.S. early last year and caused major cities to shut down, and the pace of mergers and acquisitions ground to a halt as businesses tried to figure out how they could even remain open, never mind consummate a merger.

By the second half of 2020, activity was picking up, and M&A attorneys were being asked to draw up contracts with language that would allow for protections against unexpected calamities like the coronavirus. The changes within merger agreements are subtle but significant, touching on everything from material adverse effect clauses to the form of deal consideration and how long it might take to close a transaction.

"The goal in acquisition agreements is to memorialize the parties' intent with respect to these issues," said Michael O'Bryan, a partner at Morrison & Foerster LLP. "The pandemic forced parties to consider additional issues and be a bit more specific in some circumstances. Lawyers have to really think thoroughly about how they want to write something in a contract, and why they want to write it the way they do."

Among the main areas of deal agreements affected by the pandemic are material adverse effect and material adverse change clauses, or MAEs and MACs, terms that are mostly used interchangeably. In the wake of the COVID-19 outbreak, there were high-profile cases where one party to a deal tried to get out of the transaction by citing the MAE or MAC clause.

One of the most noteworthy examples is the dispute between jewelry retailers Tiffany & Co. and LVMH Moet Hennessy Louis Vuitton SA. LVMH agreed to buy Tiffany for $16.2 billion in November 2019 but amid the pandemic said it wouldn't be able to go through with the transaction. Tiffany sued LVMH in Delaware Chancery Court, accusing it of unlawfully using the pandemic to try to avoid completing the deal.

LVMH filed a competing lawsuit in Belgium, and one of the issues at hand was whether the economic effects of the pandemic on Tiffany's business constituted an MAE. Ultimately, the companies announced in October 2020 that they had settled their dispute and agreed to a revised $15.8 billion merger.

Even before the start of the pandemic, MAE clauses were getting more specific to provide both parties to a deal with greater certainty, and that trend toward increased specificity has only been strengthened by the pandemic. Essentially, every M&A agreement nowadays specifically references COVID-19, so it's crucial to be clear on whether something has been carved out of the MAE as an exception, or whether the effects of COVID-19 specifically have been carved out from the MAE.

If the contract is written to specifically state that the effects of COVID-19 are carved out from the MAE, it means that, even if the pandemic had a tremendous effect on a business, the parties have decided that those negative effects can't be cited as a reason for one side to get out of the deal, according to O'Bryan.

"In the past, contracts maybe did or didn't refer expressly to a 'pandemic,' and they may or may not have had other exceptions that would encompass the effects of a pandemic," he said. "Now, they're more likely to say 'COVID-19' or 'pandemic' directly." 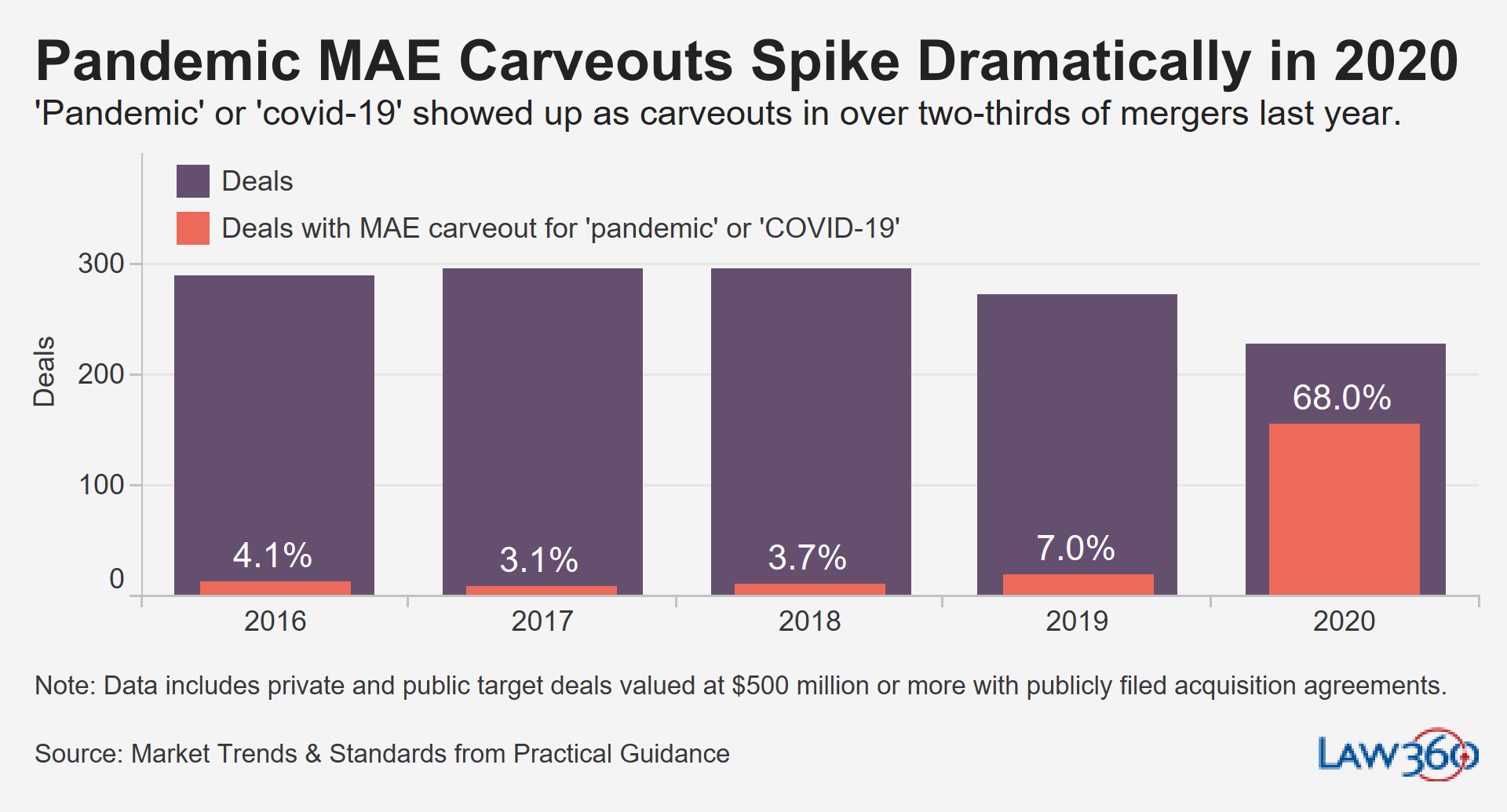 
Furthermore, O'Bryan said that even though more agreements are including provisions that specifically reference COVID-19, deal parties don't always come to terms on those portions of the contract.

"On the one hand, having that language in there is seller-friendly because it shrinks the size of the potential MAE," he said. "But on the other hand, you're seeing some deals just not getting done because the parties can't agree on the language in the MAE clause."

If your head isn't already spinning, there's more to the MAE discussion. In some cases, terms that have been carved out from the MAE clause are put back in to specify that they can be leaned upon to get out of a deal, but only if the effects on the business are disproportionate compared to peers.

"In every MAE definition, you're going to see some carve-outs carved back in," O'Bryan said.

Once you've come to terms on what is getting carved back in, there's still more to consider.

"You have to think about how you're going to write the clause," he said. "You could spend a lot of time talking about who exactly constitutes a peer, for example. No two companies are alike, so the definition of peers is subject to discussion."

Before even getting to the discussion around all those specifics, however, attorneys will have to help negotiate whether terms like "COVID-19" or "pandemic" can even be included in the provision, as the stance on that issue can vary depending on the client.

"Most sellers are saying, 'Look, if it's anything related to the pandemic, that can't count as being an MAE,'" said Rahul Patel, a partner at King & Spalding LLP and co-chair of the firm's global private equity and mergers and acquisitions practice. "And buyers are saying that's fine generally, but if the business is adversely impacted disproportionately compared to others in the same industry, it should count."

According to Patel, it's more common at this point for M&A agreements to feature some kind of specific reference to the COVID-19 pandemic than for companies to remain mum on the matter, even if every contract's MAE and MAC provisions are unique.

"To the extent there have been changes in merger agreements, it's been around the specific impacts of COVID," Patel said. "You don't typically just go silent on that. Buyers and sellers tend to be very clear in the contract: either the impacts of the pandemic can be considered or should not be considered for purposes of determining whether there has been an MAE."

Other provisions have been affected by the pandemic as well, such as the covenant to operate in the ordinary course of business. Such covenants stipulate that a party to a deal must continue to operate its business in the normal course or risk giving their counterpart an out. These covenants have loomed large in the heads of clients, since, as an example, many retailers had no choice but to close their brick-and-mortar stores once the pandemic hit.

Even if a retailer quickly adapted to doing business online, if it had previously entered into an M&A agreement with a strict covenant to operate in the ordinary course of business, the other side in the transaction would be able to argue that the retailer was no longer operating like the same company it was.

According to a Morrison & Foerster client alert from Jan. 15, since the pandemic, sellers sought flexibility to take "potentially dramatic steps with respect to their businesses, while buyers continued to want to limit the changes a target could make and still require a buyer to close."

Another affected area is the timelines for regulatory approvals and termination dates. Deals struck today can often have a longer outside closing date than is normal, in part because many regulatory agencies are still operating remotely and with reduced staff.

Morrison & Foerster's client alert said this has resulted in longer turnaround times, and "parties have responded by agreeing to longer outside dates and, in some cases, automatic extensions if the relevant party has been using specified efforts."

The need for longer timelines comes down to two primary factors: first, there's the surge in deals that were announced toward the end of last year, which has led to a ton of regulatory requests, so there's a lot of deals to review. Second, the Biden administration has been in power for less than two months, so it may take some time to figure out how it is going to approach certain issues.

"So far, it's been mostly logistics," O'Bryan said.

Then there's the increased use of earnouts, among other creative features, as deal consideration. Historically, earnouts have been most popular in sectors like life sciences, technology and industrials, and deferred payment has often been used as a way to ensure certain key employees stick around awhile rather than cashing out and leaving a company once it has been acquired. 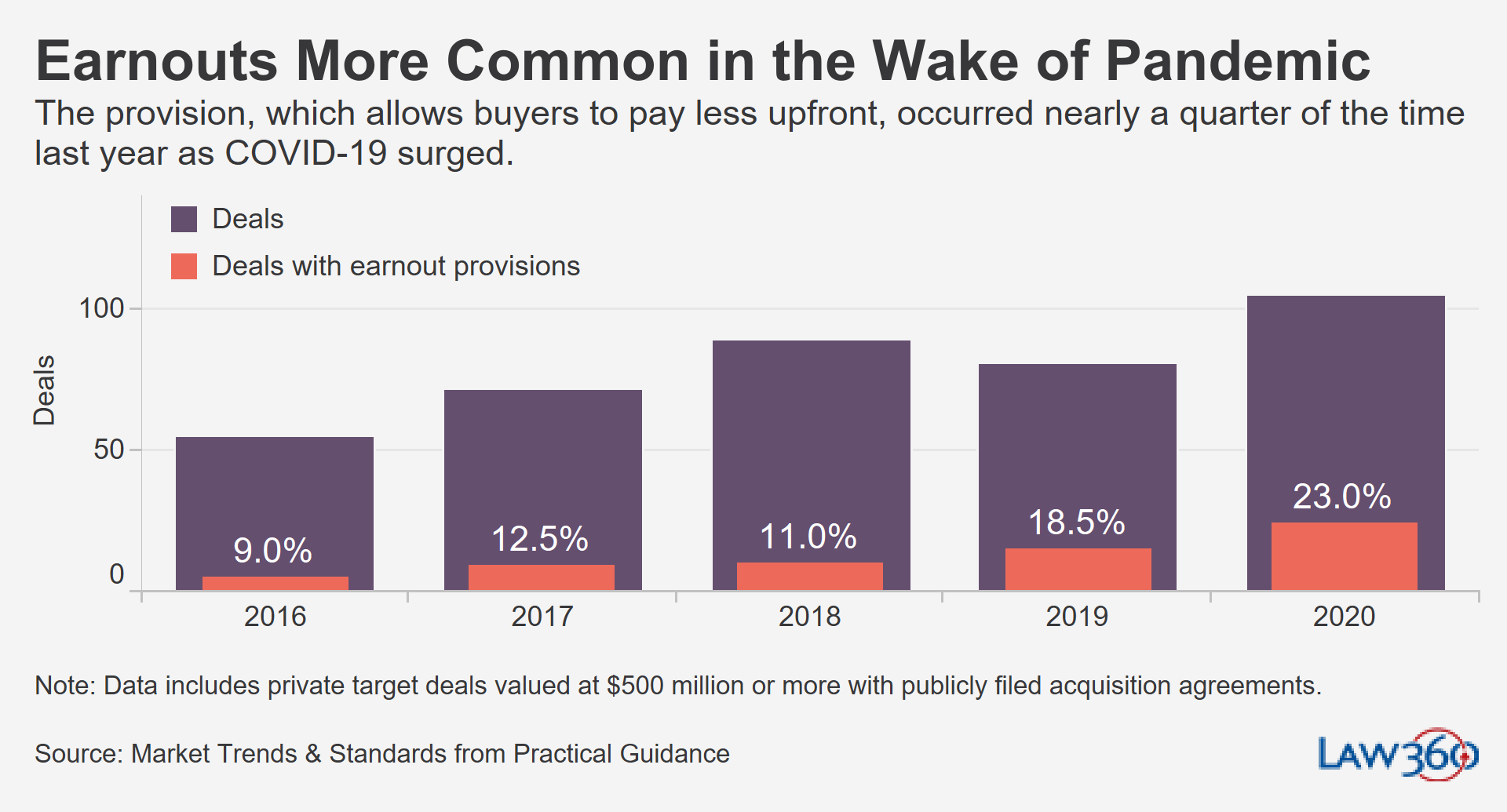 
Because of the coronavirus, earnouts are becoming more common as a way to limit the downside risk of a deal, according to Chris Letang, managing director of the professional services team at SRS Acquiom, which provides software aimed at helping deal parties manage mergers and acquisitions.

"We definitely saw an increase in earnouts during the pandemic," Letang said. "The way we've been thinking about it is this: Earnouts are the thing deal parties use when they aren't able to come to terms on what the valuation of the agreement should be."

Put another way, earnouts are often used to try and bridge the gap between what a buyer is willing to pay and what the seller thinks their company is worth.

"There was lots of uncertainty in the pandemic, so it's not surprising you would see more earnouts," Letang said.