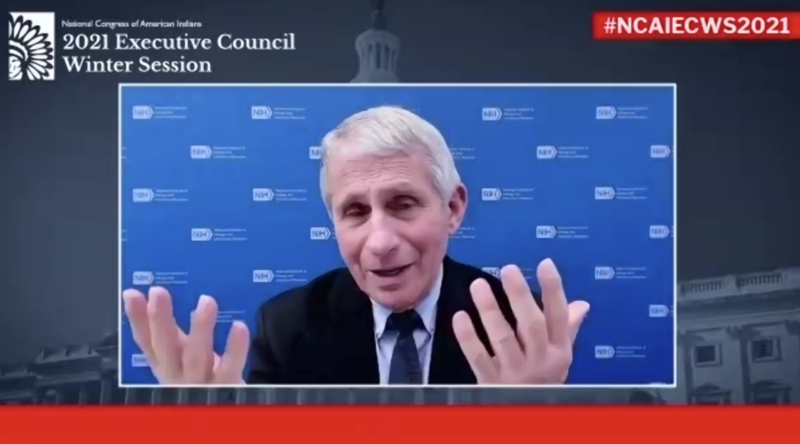 Dr. Anthony Fauci showing audience members his hands after using alcohol-based hand sanitizer in response to a question about people in rural areas not having access to warm water for washing their hands as COVID-19 prevention.

The two made separate appearances via Zoom during the second day of the National Congress of American Indians' 2021 Executive Council Winter Session, which is being held virtually. They chatted with participants from tribes across the country about the outsized impacts of COVID-19 on Native American communities due to centuries of systemic discrimination.

At NCAI Chairman Mark Macarro's request, Pelosi promised to write the U.S. Department of the Treasury a letter urging the agency to use tribe-certified population data to distribute the funds rather than the Coronavirus Aid, Relief and Economic Security Act method of relying on census population data to distribute the aid, which spurred a slew of suits.

Fauci, who serves as Biden's chief medical adviser and is director of the National Institute of Allergy and Infectious Diseases, also discussed actions to try staving off COVID-19's immense impact on tribal communities.

After going through a presentation on the pandemic, Fauci spent a large portion of the conversation trying to instill trust in the vaccine, including getting tribal communities involved in clinical trials. He cited how Native American citizens make up 1.3% of the country's population, but they only made up .5%, .8% and .4% of the trial participants for Pfizer, Moderna and Janssen, respectively.

"The hesitancy of minority populations, African Americans, American Indians and others in getting involved in projects that are run by the federal government in the arena of health is understandable because of the history of abuses against minority populations," Fauci said. His slideshow had included a few images of public figures receiving the vaccine as a way to garner public trust for it.

"I totally respect and understand the hesitancy — and I'm not criticizing it — but I want people to at least understand the following: that those abuses cannot happen in today's environment, because of the strict, ethical constraints that have been put on any project that involves health, interventions, vaccines, drugs or what have you, involving anyone, particularly minority populations," Fauci added.

After an audience member asked about a plan to address young people who were refusing the vaccine, Fauci said the government had created a variety of programs "to make it aware to young people that we are trying to reach out to you."

NCAI President Fawn Sharp, the current president of the Quinault Indian Nation in Taholah, Washington, expressed gratitude for Fauci's advocacy to ensure that tribal nations were fully included in the vaccine decision-making process.

"On behalf of every tribal nation that is represented at NCAI, we are so very grateful for your steadfast and steady voice throughout this entire pandemic — you're a voice that we look to, and we so appreciate you," she said.